The Georgetown Hoyas avenged its loss to Pitt in the regular season by bouncing the Panthers from the 2012 Big East Tournament yesterday, and as usual we here at THE GLOBAL PHENOMENON are handing out hardware to those most deserving. We've got a boatload to get to today, so on with the show!

The Chris Wright Heart of a Champion Award:
Henry Sims. What more can we say that hasn't already been said about Henry's performance yesterday? 20 points, 13 rebounds and 5 assists? ARE YOU KIDDING ME? Congrats to Henry for that performance yesterday, as it certainly helped put him on the map for the NBA Draft. Having said all that, we clearly NEED MOAR SIMS if Georgetown is to get past the evil Bearcats this afternoon.

Greyhounds Award for Defensive Excellence:
The Georgetown Hoyas. Some Chicago Bulls assistant in the '90s called the lock-down perimeter defensive trio of Michael Jordan, Scottie Pippen, and Ron Harper "Greyhounds" thanks to their length, athleticism, and speed. The energetic Hoya defense showed all of those traits Wednesday, yielding nothing but the occasional 30-foot bomb. After a rocky performance against Marquette and a so-so opening to against Pitt, the Hoyas held the Panthers to a single bucket for the last six-plus minutes of the half. Might be time to steal a nickname.

Handling Oneself Like A Man Award:Markel Starks. John Thompson III is not one for big gestures, so when he sat Starks for the entire Villanova game and pushed him out of the starting lineup, many wondered how Starks would handle such a public demotion. Well, Starks has handled himself like a man. Since the Notre Dame game, he has played ferociously on defense and controlled the offense while in the game. One can't help but be impressed with his leadership skills and ability to roll with the punches for the good of the team. Markel will have a massive role in beating Cincinnati's press tomorrow, so he should expect a ton of minutes.

Your Time Will Come Award:Georgetown's bench. Mikael Hopkins, Tyler Adams, Jabril Trawick, and Aaron Bowen are all freshmen. Hopkins and Trawick have played important minutes during different spurts this year, but the other two have not for one reason or another. I fully believe that all four are going to be wildly important parts of Georgetown's program going forward, and it has been really refreshing to watch them cheer so wholeheartedly for their teammates even though they are seeing limited minutes. Every player on Georgetown was a SUPERSTAR in high school, so it must be very challenging to sit while your teammates play. Yet, this group has been very supportive of the team ahead of themselves, which is plenty refreshing compared to previous bench players transferring from the program rather than waiting their turns.

NBA Scouts Take Notice Award:Henry Sims. If NBA scouts should learn anything from watching Georgetown games, they should know that Georgetown prepares their big men like no other program in the country. It would stun me if Henry Sims doesn't get a shot at the NBA in June. Considering Roy Hibbert and Greg Monroe's successes, how a team doesn't take a shot on a versatile 6'11" big man that can play anywhere on the floor is beyond me.

Speaking of Big Men Award:
Check out what the crazy cats on campus have done to welcome Nerlens Noel on Sunday! 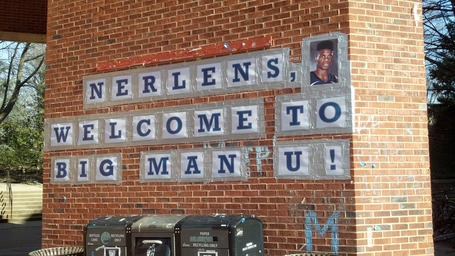 Toughness Comes In Many Flavors Award:Otto Porter. Do not get it twisted, Otto is one tough motherfucker. We saw this initially after Mo Sutton mowed him down with an elbow at the start of the Villanova game a couple weeks ago. We saw it again yesterday against Pittsburgh. Otto took his anger from not being on the Big East All Rookie team and turned it into 20 points and 6 rebounds, while cooly dismantling Pittsburgh. Otto may not be one for big emotional gestures, but he will silently tear your heart out and enjoy himself while doing so.

Playing The Right Matchups Award:Nate Lubick. Ol' Thundersnow has some sort of mental block with Pittsburgh, a team he struggled against in January and struggled with again yesterday. JT3 recognized this and only played him 6 minutes yesterday. For as bad of a matchup Pitt is for Nate, Cincinnati is the exact opposite. Lubick was our best player against Cincinnati earlier in the year, and we should expect him to get 20-25 minutes tomorrow and play a big role in the outcome of the game.

Tightening The Reins Award:
JT3. Don't look now, but JT3 has now trimmed the rotation down to six. And our beloved, scrappy, coaches son who starts the game on the floor is not one of them. The increased depth the Hoyas have deployed this year has been excellent, but now that we've hit crunch time, JT3 is concentrating his minutes among the Jason, Henry, Hollis, Otto, Markel and Greg. We'll see Nate, Trawick and Hopkins come foul trouble or to fire up a flat team, but Coach has found his comfort zone in shortened March rotation.

Don't Think, Just Play Award:Jason Clark. It was clear that Clark was thinking instead of playing against Pittsburgh. His shots were short armed and it seemed like he was trying to will the ball in the basket. When in rhythm, he is about as good as anyone in the country hitting jumpshots. In addition, his ability to create off the dribble is a key cog in Georgetown's offense. Forget the noise and just play, Jason.

Bold Prediction Award:UConn Huskies. UConn will beat Syracuse today. Something clicked in UConn during that ridiculous comeback against West Virginia yesterday. There is no question that UConn is one of the most talented teams in the country, but for one reason or another, haven't been able to put it together yet. They need one more quality win to guarantee an NCAA Tournament berth, and it is coming today against Syracuse.

Keep That Guy Away From The Court Award:Jahidilikespie. I was shocked to see Captain Fury right behind Jamie Dixon's bench yesterday. My first thought was "How the hell did he get those seats?" My second thought was "I hope security is watching him, because he is a psychopath". Had yesterday turned out differently, it wouldn't have surprised me to see Captain Fury rush the court.

Civility is Dead Award:
Longtime reader, soon to be commenter and Travel Channel Star @SoPoMik was so excited behind the PITT bench today that he was giving future Roy Williams whipping boy the business about his technical foul only to realize that Mr. ACC's DAD was across the aisle from him. Did that stop Mr. Civility? No! He proceeded to waive his arms in the aisle to the point where his sunglasses flew off and landed under the senior Dixon's chair.

No More Chances Award:Jamie Dixon. I've tried really hard to appreciate Jamie Dixon over the years. His teams have burnt me in NCAA Tournament brackets time and time again, but I still had some respect for him. Yesterday was the last straw. His constant whining about every call was incredibly irritating. On top of that, he seemed genuinely surprised that his team sucked so badly. Dude, there is no DeJuan Blair, there is no Fat Levance Fields, no Brad Wanamaker. Your team was what it was, just let it go and stop being so annoying on the sidelines.

Another Test Of Coaching Aptitude Award:John Thompson III. JT3 passed his first test yesterday with flying colors. He was able to counter Pitt's zone offense by bringing Otto Porter to the foul line to contest Pitt picking apart our zone from the middle of the floor. Today he must master Mick Cronin's press break. Enough of just leaving the two guards to fend for themselves against a press. Please bring a bigger man to the middle of the backcourt to alleviate some pressure. Greg Whittington, Otto Porter, Hollis Thompson, or Henry Sims can fill this role.

Move Over Syracuse Award:Georgetown's zone defense. The pot smokers from up North have the most famous zone in the country, but Georgetown's zone is the BEST in the country. With four starters over 6'8", Georgetown's length is swarming on all parts of the court. Had Ashton Gibbs not chucked in a few random three pointers, Pitt could have been held to under 40 points.

The Forgotten Freshman Award:Greg Whittington. Lost in the Otto Porter hysteria was Greg's performance yesterday. Otto scored more points, but Greg's points were more important. Whittington hit a three when Georgetown was down 21-16, had an and-one layup to take Georgetown's first lead at 24-23, and hit a three to stop the bleeding when Pittsburgh cut the lead to 31-29 early in the second half. Those 9 points were probably the 9 biggest points in the game. Not bad for a freshman in his first Big East Tournament game.

Summer In The Winter Award:New York City. For those of you lucky enough to be attending the game tomorrow, a Georgetown win should be followed with some serious day drinking. Please take advantage of the 70 degree weather and throw back a few at an outdoor bar for all of us sad chaps who will be behind our desks.

Bringing Back The Midrange Game Award:Otto Porter. There is no question that Otto is going to have a very lucrative basketball career. There is so much about his game to like - his nose for rebounds, his handle for a 6'9" forward, his body control in traffic, etc. - but nothing is more impressive than his midrange game. I am too lazy to look up that stats, but I am going to say that Otto hits 80%+ of his shots within 12 feet, it is insane.

Spike Lee Award:
Looks like there is at least one Casualty among us who had a pretty nice seat for the game yesterday. 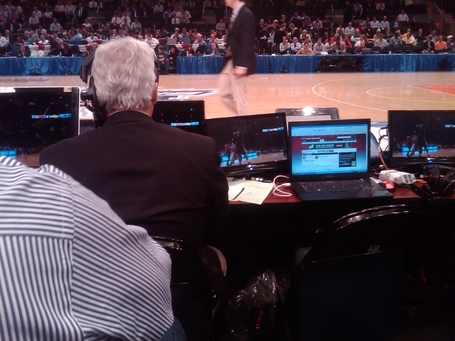 Why wouldn't that computer be following the Casual Gamethread?

Roy Hibbert Award for Dominating Pittsburgh Inside in the Big East Tournament:
Henry Sims. Nearly five years ago, Sims' big man forerunner gave Aaron Gray the business in the 2007 Big East Tournament final, holding the pasty Panther to 1 of 13 from the field while on the other end going off for 18 points and 11 rebounds of his own en route to the Hoyas' first Big East Tournament title in since Pops's prime. Wednesday, Sims doled out equal abuse, notching an incredible 20-13-5 while keeping his counterparts in check.

Lord Voldemort Award:
Jason Clark, Hollis Thompson and Nate Lubick combined to score 10 points on 1-10 shooting from the floor. The good news is, of course, that Georgetown was able to take advantage of Pitt's lack of depth and able bodies down low. The bad news is, of course, that Georgetown will have a much tougher time doing so against the Bearcats, so Clark and Hollis best be gettin' their shiznit together.

Only in America Award: 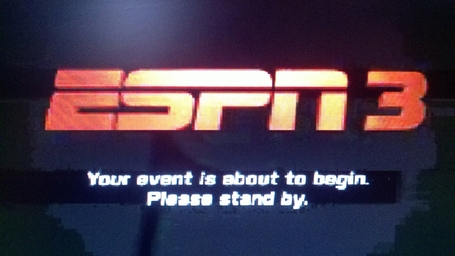 We live on a country in which I can get a fucking cupcake from an ATM machine, but I cannot get an ESPN3 feed to hold steady and broadcast in casual HD without being blurry for two damn hours during a Big East Tournament game featuring the Georgetown Hoyas.

The Jim Nantz Award for In-Game Commentary:
I could take the time to go through all of the near 900 comments in the Casual Gamethread and pull out many of your most excellent witticisms OR I could just post this gif of Kate Upton doing The Dougie in a bikini which may have very well saved our season. The Hoyas were trailing when this was posted in the thread and the Hoyas immediately went on a 16-2 run to close the half. Thank you, Kate Upton.