The 2012 Big East Tournament kicks off today with a full slate of action live from Madison Square Garden in New York fucking City, and we here at THE GLOBAL PHENOMENON are bringing you all the action as it happens. 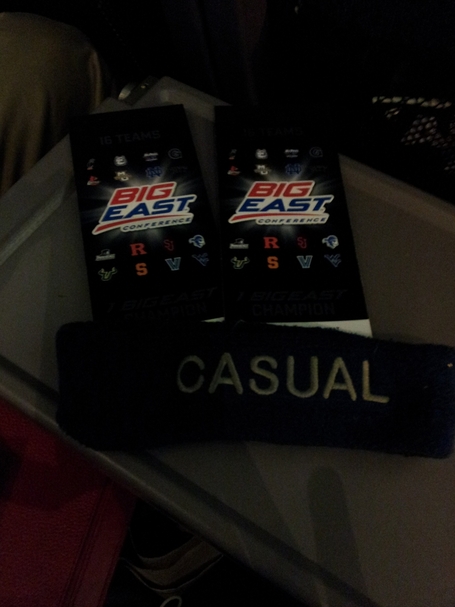 Georgetown team preview after The Jump:

SB Nation New York has put together team by team previews for all of the Big East teams, and check out this preview of the Tournament.

Below is Georgetown's Preview:

The Big East Conference Tournament 2012 tips off Tuesday afternoon at Madison Square Garden, and this SB Nation New York StoryStream is the place to come for every tidbit of information. For a full schedule with results and updates of the bracket, click here.

Picked to finish in 10th place in the Big East Conference preseason polls, the Georgetown Hoyas men's basketball program has surpassed all expectations this season.

But if you look at their star players, senior guard Jason Clark and junior forward Hillis Thompson, and head coach, John Thompson III, it shouldn't be a huge surprise that the Hoyas (22-7, 12-6) are now one of the favorites to win the Big East Tournament crown.

Thompson will be at the helm in Georgetown for a long, long time. He led the Hoyas to the Final Four in 2007, but the team is only 1-3 in the NCAA Tournament since then.

The Hoyas do-it-all man is Hollis Thompson, the 6-8 junior forward. He’s averaging career highs in points (13.0) and rebounds (5.6) per game, and is one of the league’s most consistent 3-point shooters.

Playing For: Seeding in the NCAA Tournament

If Georgetown were to run the table, they could perhaps move up to the 2-line. If they don’t they are likely to be anywhere in the 3-5 range.

Breakdown: As with most of John Thompson III’s teams, it’s a team-effort for the Hoyas. The scoring, rebounding and minutes are spread out, and there really isn’t a go-to guy (which can either be viewed as a good or bad thing). Senior Jason Clark has gotten better every year, and led the team with 14.3 ppg this season.

Not much was expected from the Hoyas this season, but a few big early season wins over the likes of Memphis, Alabama and Louisville got heads turning and upped the confidence in D.C. Georgetown finished 22-7 (12-6 in conference play) and notably gave rival Syracuse a real run for its money at the Carrier Dome back on Feb. 8 in an overtime loss. They’re won’t wow anyone, but can easily find themselves in the Big East Final if the matchups fall right.

As far as Vegas is concerned, the Syracuse Wonder Joints are the betting favorite to win the Big East Tournament at 1:1 odds, Marquette is at 7/2, and the 5th seeded Hoyas are 11/2. According to this site, Georgetown has a 9% chance of winning the Tournament.

Though your Hoyas don't play until tomorrow, Georgetown's next opponent will be the winner of the Pittsburgh - St. John's game that tips at 2pm eastern.