Share All sharing options for: The Casual Awards: Now The Real Fun Begins

The Georgetown Hoyas dropped the regular season finale at Marquette on Saturday, a loss which when coupled with half a dozen other horrifying scenarios wound up costing the Hoyas the double-bye in the 2012 Big East Tournament. As the Hoyas prepare for a Wednesday tilt at Madison Square Garden against either Pitt or St. John's to kick off a glorious run through March (and April!), let's take a look back at the Marquette game and hand out some hardware to those most deserving.

The Chris Wright Heart of a Champion Award:
Otto Porter. Porter and Hollis Thompson led the Hoyas with 19 points each, but Otto gets the nod here based on his zero turnover performance and oh, the fact that he shot 9-11 from the floor. Porter has been a rock for the Hoyas all season, and even if the interns who filled out the All-Rookie Team selections for the Big East coaches were too busy picking their pimples to vote for Otto, he has clearly been one of the top few freshmen in the Conference.

Round of Applause Award:
Your fightin' Georgetown Hoyas. Not even hoyasincebirth, the world's biggest Georgetown homer, could have predicted this season. What started with "Let's hope some things go right and we end up in the tournament" has evolved into "If we don't go to the Sweet 16, I will be crushed". So many different people have stepped up this year. It starts with John Thompson III, who is so criminally underrated that it is comical. The same can obviously be said about Otto Porter and Jason Clark. All three have something to prove this March.

Round of Applause Award, Part Deux:
Casual appreciation to Ruby Q, Mr. Kensington, and the rest of the Anonymous Eagle staff for their outstanding hospitality in Milwaukee. Beers, shots, brats, and beers made for a memorable 12 hours of drinking. 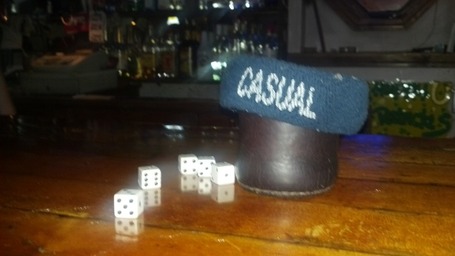 Roll the dice and get shots, best game ever 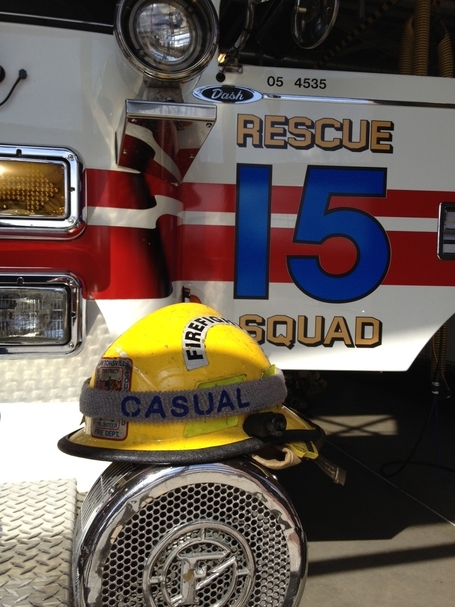 Revenge Tour Part Deux Award:
It's happening folks. Whether we like it or not, we have to stare down our Pitt/Cincy/Syracuse demons in the Big East Tournament to get to the Saturday night final . I wouldn't want it any other way. Except for every other way.

Two Wins Are Necessary Award:
Georgetown needs to defeat the winner of Pitt/SJU and then Cincinnati to lock up a 3 seed in the NCAA Tournament. Having seen Kentucky and UNC run roughshod all over Florida and Duke this weekend, I'd rather avoid both of those teams for as long as humanly possible. My guess is we could sneak into a 2 seed if a few things go right and we win the Big East Tournament, and we could surely be a 4 seed if we lose to SJU/Pitt on Wednesday.

All I Want For Christmas Award:
Please let Georgetown get out of the first weekend in the NCAA Tournament. It is so exhausting reading the valuable members on Casual Hoya complain about late season collapses, in addition to many mainstream media folks predicting our downfall. I just want a Sweet 16 berth, I won't ask for anything else this year.

Document Your Lightly Fried Rabbit Tenderloin with a Poached Egg on a Freshly Made Biscuit with Italian Sausage Gravy Award: 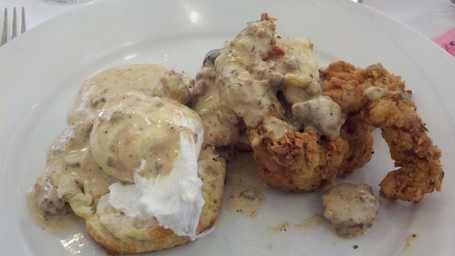 So Good To Be Back Award:
Hollis Thompson. Seeing Hollis stroking threes, hitting pull ups, and exploding for layups during the Marquette game is a very pleasant development. While a second place finish in the Big East would have been awesome, it is far more important that Hollis is starting to get his groove back in time for March.

Glad That Is Out Of The Way Award:
Jason Clark. Jason has been extraordinary this year. He has had one of the more memorable senior seasons for a Georgetown player in recent memory. He was rewarded Sunday by being named 1st team All-Big East. But holy crap was he awful on Saturday. He had 8 careless turnovers, couldn't keep Darius Johnson-Odom in front of him, and went 4-14 from the field on shots he normally buries with ease. Good thing that's done, now it is time for him to dominate for the next month.

Tiger Woods Is Awesome Award:
Tiger Woods. Say what you will about the man's extracurricular activities, we can all agree that Sundays without Tiger just aren't as fun as when he is around. I am really hoping for a McIlroy-Woods showdown on Masters Sunday with Tiger beating that little pansy Irishman on the 18th hole. 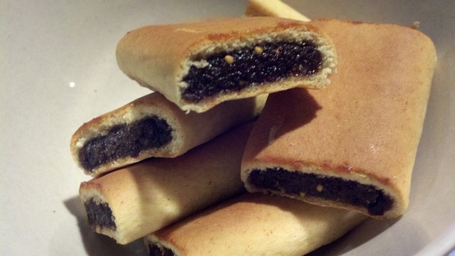 Fig Newtons are the tits.

Mark Sanchez Award For Passing Accuracy:
Jason Clark. Marquette's double team trap is the quickest Georgetown has seen this season and it continually prevented Clark from turning the corner. Our veteran leader responded by heaving 50-50 balls near half-court, leaving flopping dandy Jae Crowder and his legion of Golden Goobers to feast on the errant passes. It's the first time we've seen Clark truly shaken this season by a press -- hopefully some intensive film sessions will get this sorted out before Georgetown plays March games that matter.

Wilt Chamberlain Award for Excellent Free-Throw Shooting.:
The Georgetown Hoyas. Your beloved Hoyas made just 6 of 13 free throws in the first half; two of those misses came at the front end of one-and-ones, and so left two points apiece at the line. For the game, they made just 14 of 25, for a woeful 56 percent. As annoying as the defensive lapses have been this season, Georgetown's frequent inability to convert from the line is downright frightening.

Malcolm Gladwell Award For Thinking the Full-Court Press Was Invented Yesterday:
The Georgetown Hoyas. Gladwell wrote an article a couple years back about, well, it was hard to say exactly what it was about, but tied together a bunch of anecdotes in a convoluted way to make a seemingly complex but actually quite obvious point. One of the stories seemed to imply that Rick Pitino invented the full-court press and used it to transform a rag-tag bunch of underdogs into NCAA champions while at Kentucky. On Saturday against Marquette, Georgetown's press-break defied every basic rule of breaking a press and looked spectacularly inept in doing so. The Hoyas' struggles against the press were particularly head-scratching because they've played other teams this year that press full-time, like DePaul. As bad as some of the Hoya guard play looked, the strategy, which often involved clearing out so one guard could try to beat two Marquette defenders, was far more confusing. Maybe they took their game plan taken out of the paperback edition of Outliers.

Hollis Thompson Award for Career Day During a Disaster:
Otto Porter. Honorable mention goes to Hollywood, the award's namesake who had huge days in epic collapses in Georgetown's last two NCAA tournament games, and came up large again on Saturday, shaking off a recent slump to score 19 points, grab 7 rebounds, and dish out 4 assists, all while looking far more assertive than at any other point in the last month. But young Otto had a near-perfect day, also scoring 19 points, his new career high, on sparkling 9 of 11 shooting, making him the only Hoya starter to make half of his shot attempts. Porter's seamless transition to starter has Hoya fans fawning over him even more than before, if that's possible.

War Horse Award for Award Snub:
Otto Porter, who somehow didn't make the Big East All-Rookie Team, in favor of a bunch of dudes who put up marginally better numbers on worse teams. Perhaps they should just rename it the MarShon Brooks Big East All-Rookie Team. Hopefully, the Hoyas will have the chance to face a few of those who were voted in ahead of him in the Big East Tournament, and we can give Porter the 1995 Hakeem Olajuwon/1997 Michael Jordan Award for Invalidating an Award through Playoff Dominance. Also, I cried during War Horse.

Jae Crowder is An Alien Controlled by Martians That Wanted Marquette to Win on Senior Day Award:
Jae Crowder. Like witch doctors working in Ali's favor against Foreman (as chronicled in When We Were Kings), Crowder had something other-worldly working in his favor. Twice as Georgetown's momentum was mounting, the Hoyas forced a missed shot and somehow Crowder and his majestic flowing locks wound up with the ball in his hands. There's just no other explanation for when Greg Whittington grabbed a rebound and then fell down with the ball popping into Crowder's hands for an open layup. It had to be the aliens. That, or that bizarre two-headed 4-armed Crowder-DJO monument that the Marquette students had constructed.

86% Left in Battery and ESPN Screwing with the Time of the Game Award: 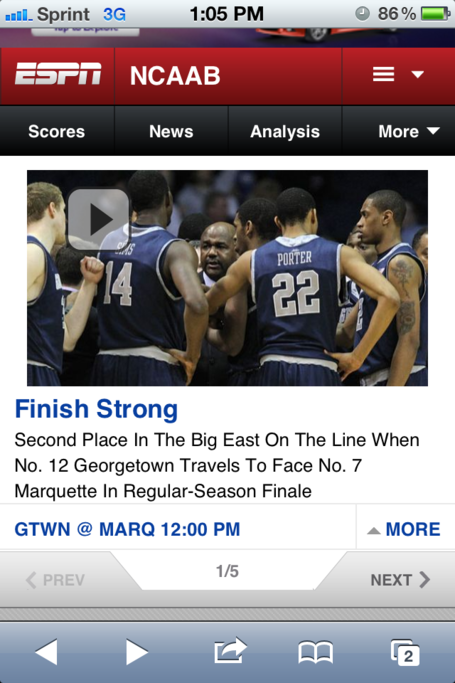 Otto Porter Award for Exellence that Doesn't Show Up in the Box Score and Therefor is Not Regarded by Big East Coaches as Ever Having Happened:
Otto Porter. The Hoyas struggled all day with the press, and they nearly had one more turnover when Hollis threw a dangerous pass out of bounds in the vicinity of Otto. What was a sure turnover for almost anyone else, Otto grabbed with one hand, while falling out of bounds threw a quick touch pass back to Hollis, who quickly passed it to Sims for a monster dunk. Typical Otto Porter hockey assist.

Chess Match Award:
Jae Crowder versus Otto Porter. Yes, Crowder is a flopping dandy, but excluding that, basketball IQ involved in the frequent Crowder vs. Otto match-up was off the charts. Two of the most versatile, do-it-all big men in the league (country?) both played an elite basketball as they carried their respective teams.

Pitino Blows Goats Award:
Remind me again why Louisville is a lock to make the Dance over USF? I think I saw somewhere that Louisville didn't beat a single team with a winning Conference record this season.

Lord Voldemort Award:
Neutral courts aren't technically the same as road games, and that's good because Georgetown finished the regular season losing 4 of its last 5 on the road.

The Jim Nantz Award for In-Game Commentary:
Here are a few golden nuggets from the Casual Gamethread:

Hey, remember how for like three years in a row we couldn't get the ball across half court without pulling out hair out?

I can get down with that Marquette

Steps to improve the game:

do you KNOW how fast basketball moves when you've got a fever of 101+?

i am where cynical meets delirious

Cancel the tickets to new York and new Orleans. The season is over.

by RileysDressLikeAHoyaJersey on Mar 3, 2012 2:28 PM EST via mobile reply actions

The blue blobs are struggling with the white blobs.

Popcorn chicken is in the microwave

MASN feed just died...is it too sunny for the signal?

by RileysDressLikeAHoyaJersey on Mar 3, 2012 3:34 PM EST via mobile reply actions

Hokay, since Tyler's tits aren't working, it's time to shoot blindly and see if we can find something that works for us.

I hate Marquette so much right now

Good thing too cause we need new rivals

The Big East Tournament is NeXt.