Your Georgetown fighting Hoyas travel to Milwaukee to face Marquette tomorrow with the double-bye in the 2012 Big East Tournament ON THE LINE. As we all recall quite fondly, the Hoyas defeated the Golden Eagles in an epic comeback in the first tilt at Verizon, and round two is set for tomorrow in The Good Land. Special thanks once again to one of our bestest blog friends, Rubie Q at Anonymous Eagle for providing answers to our hard-hitting questions. Rubie Q, this Pabst Blue Ribbon is for you. When you're done reading this pleasant exchange, check out our answers to their questions RIGHT HERE. 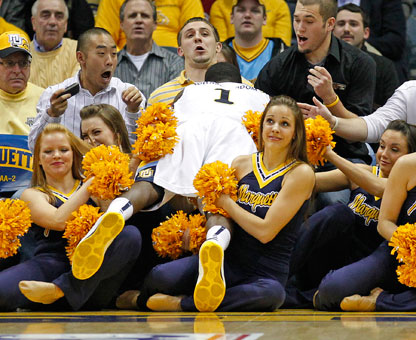 Some solid facial expressions in this picture. via i.usatoday.net

Hello! Congratulations on the recent addition to your family!

Thanks, friend. I'm very much looking forward to answering questions that don't revolve around: "Pampers or Huggies?"

(And, BTW: it's totally Pampers. My kids go through Huggies like hot fudge through single-ply TP. And Luvs? Pfft. Might as well tape some old newspaper on the kid's butt, you know what I mean? Oh, God. What's happened to my life?)

More fun with the Golden Gimps after The Jump:

Who is the Big East Player of the Year? Who would you vote for?

I would like to be something other than a magnificent homer and give you a name other than Jae Crowder. No, that's not true. I don't care if it makes me a magnificent homer: it's Jae Crowder. Fifth in the conference in scoring, second in steals, tenth in rebounding, regularly guards guys who are between three and six inches taller than him, best all-around player (and by a comfortable margin) on a squad that's going to finish 13-5, at worst, in conference play? Yes please. Not to mention that he leads the league in "last names shared with dangerous-but-wannabe-Dixie-gangsters from Justified."

And, on a more personal level: some time in December, I think after MU got seal-clubbed by Vandy at home and Crowder was the only guy who played like he gave two-thirds of a shit, I felt compelled to photoshop Jae's head onto the head of the dude from Manimal. (Don't ask; I was in a dark place.) The picture got passed around on Twitter, and it would have been very easy for Crowder to say: "Dude, you're 31 years old and you're about to be a father of twins. It's probably time to stop huffing shoe polish." Instead: kid made the picture his avatar on Twitter for two months. Man of the people, that Jae Crowder.

Two biggest surprises. The first is beating Wisconsin in Ho Chi Madison, which is akin to beating the Viet Cong in jungle warfare (if the Viet Cong waited 35 seconds between firing rounds). The second is that Marquette's defense has been largely excellent despite the fact that we lost our best defensive player (Chris Otule) in December.

Biggest disappointment? I'd say the Georgetown game, but my therapist has advised me not to talk about that yet. So I'll say it was getting godsmacked at Notre Dame, when some pimply-faced punk who was averaging, like, four points a game hit 12 threes in the second half. (Related story, re: pimply-faced punks: have they not heard of apricot scrub in South Bend? Good heavens, boys: soap is your friend.) Everybody knew Notre Dame was (and is) a fraud, and I REALLY wanted to be the ones to expose that.

If you guys don't make the Sweet 16, is this season a bust in your mind?

I'm of a different mind than most on this subject, but the answer to that question is a resounding NO, in my opinion. To me, this season is already a great success: the win in Madison, a single-season record for wins in the Big East, most of which was accomplished after we lost our only two true post players, plus a possible Player of the Year award winner. Not to mention that MU came back from double-digit deficits to win on about 36 occasions this year. People think I'm crazy when I say this, but a couple games in March doesn't change what happened in the 32 games before.

Do you think that Marquette can get to the Final Four? Who will be the two Big East teams that go furthest in the NCAA Tournament?

Nah, I doubt it. I think we're good, and we play hard and usually play pretty smart, but the lack of height and the short bench are going to be pretty easy to exploit if Marquette makes it out of the first weekend. I hope I'm wrong, of course, and I realize that outside of Kentucky and maybe 'Cuse there aren't any teams that are head-and-shoulders above everybody else, but still: I don't see it.

I'll go process of elimination re: Big East teams that will go furthest in the tournament: it won't be Notre Dame, I'd never bet on Syracuse in March, Louisville can't throw the ball in the ocean, UConn LOL, 'Nati's too schizophrenic ... I guess that leaves me with Georgetown and ... South Florida? Heh. Yeah, OK.

Scenario One, no question. Sweet 16s are nice, I guess, but winning the last conference tourney for the best basketball conference in the history of things, AND getting to deliver the symbolic "FUCK ME? NO, FUCK YOU!" to 'Cuse on behalf of the remaining Big East members? That would be a trip.

What does Marquette look like next year? Who are you most excited about?

I'm not a recruiting guy, but IIRC, we've got two kids named Taylor coming in -- TJ, a transfer from Oklahoma who's playing junior college ball this year, and Steve, a stud from Chicago -- a wing named Jamal Ferguson, and Aaron Durley, a.k.a. the tallest kid to ever play in the Little League World Series.

I try not to get my expectations up about the freshmen and first-year players, so I'll say the guy I'm most excited about next season is Jamil Wilson. He's been playing a ton since Otule and Davante Gardner went down, and the returns have been promising. I think he could be really good when he becomes a focal point of the offense: he's got a decent shot, can jump out of the gym, and Jay Bilas could write an epic poem about his length. Kid's got the arms of a pterodactyl.

If you could steal one player from another Big East squad and put him on Marquette, who would it be?

Serious answer: Gorgui Dieng, because I think Marquette could wreck shit defensively with a guy like that patrolling the paint.

Slightly less serious answer: Hollis Thompson, so I could plant him at the end of the bench to ensure that he never has the chance to rip my still-beating heart from my chest ever again.

Against WVU, Buzz Williams suspended 4 of your starters for the 1st half. What was the story there and did you think that a one half suspension was a punishment that fit the crime?

Anyway: nobody knows what the story is, just more "undisclosed violation of team rules" nonsense. That runs MU's total to six suspensions this year: Cadougan got sat for the Wisconsin game, and DJO was held out of the Jacksonville game about a week later. I have my theories on what's going on; you might remember that there were sexual assault allegations made against certain unidentified Marquette student-athletes last year, and that Blue got a battery citation after popping a fellow student who called him "Vander Orange," and I think there's more than a little pressure on Buzz to really crack the whip this year with the discipline. Still: he could save us all a lot of time and energy if they'd just say: "They were eight minutes late for the team bus" or something like that.

Please discuss that dancing incident Buzz Williams pulled off after the win at WVU. Greatest thing ever?

Would have been the greatest thing ever, 'cept dude keeps tripping over himself to apologize for doing it. I have two problems with that: for one, as a commenter on AE pointed out after the game, Buzz said he grew up on country music and that "Country Roads" was one of his favorite songs and he was moved by the moment and spontaneously busted out his jig ... but then says that he didn't realize why they were playing the song until he heard "West Virginia" in the chorus. Uh, sure.

The bigger issue: dude was trolling hard (watch the video again: you'll see him smirk at the camera when he notices he's being filmed) and I wish he would just own it. Put on the black hat for a while. I mean, we're going to have a serious shortage of dickhead coaches in the Big East in pretty short order: Boeheim's leaving, Calhoun's not long for the coaching world, and Huggy Bear will be gone before we know it. Buzz could do a heel turn for a bit. I think it'd be fun.

Did you enjoy ‘The Artist'? Any other film you would have liked to see nominated and/or win Best Picture?

Did anybody actually see "The Artist"? I guess I just figured it was one of those things where somebody said: "Well, it was made by French people, so it must be arty and poignant and shit" and then nobody wanted to rock the boat and seem raycess, so they all just nodded and said: "Oh, yes, 'The Artist.' Marvelous." (Bear in mind when I say this: you're talking to the guy who had no idea that Adele was a well-built British gal who talks like she's a chimney sweep. They flashed "ADELE" under her picture at the Grammys, and I was like: "Heh, check it out, they screwed that one up," and Mrs. Q said: "No, that's Adele." Mind blown, for real.)

Will you root for UCLA when Buzz is their coach next season?

The only part of that situation that would make me laugh, if it came to pass: when Kyle Anderson reopened his recruitment, led Seton Hall on for another couple months, and then decided to go back to UCLA.

Gun to your head, which four teams go to New Orleans? Who cuts down the nets?

Kentucky, Michigan State, North Carolina, and Baylor. (I have no idea; I haven't watched a non-Marquette game for a month.) I'll take Michigan State to win it all, and I would confidently wager zero dollars on that.

Are you having an Anonymous Extravaganza anytime soon? If so, will there be brats?

The difficult thing about an Anonymous Extravaganza, of course, is maintaining anonymity. We kicked around the idea of doing it Eyes Wide Shut style -- with brats, of course -- but we had to shelf that idea because of liability purposes.

And also complete and total lack of interest.

Complete this sentence. If there were one Big East team to lose in the first round of the NCAAs, I hope it is [INSERT TEAM].