Share All sharing options for: The Mourning After: Hoyas Season Ends, Hope Survives 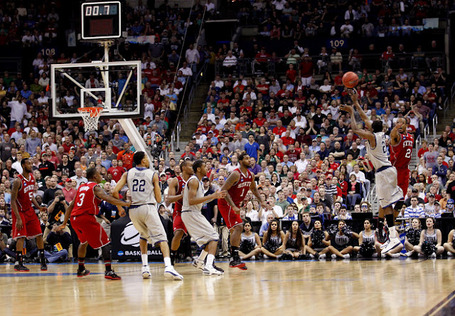 The Georgetown Hoyas season came to a screeching halt yesterday against N.C. State in the 2012 NCAA Tournament, and though disappointment is clearly the word of the day around these parts, we've been through this before (SO MANY TIMES) and everything will be fine...especially if a certain Nerlens Noel decides to make Georgetown his home next season.

NCAA tournament 2012: Georgetown falls to N.C. State, 66-63 - The Washington Post
"It’s a group that’s given it their all," Thompson said, as seniors Jason Clark and Henry Sims looked on with damp eyes. "We haven’t always had success. But it’s a group that all year fought for and cared about each other."

Hoya Prospectus: Recap: North Carolina State 66, Georgetown 63
Last season, we noted in this space that Coach Thompson was in danger of cementing a reputation when his 6th-seeded Hoyas were beat by 11th-seeded Virginia Commonwealth. Consider the reputation cemented.

Rapid Reaction: NC State 66, G'town 63 - College Basketball Nation Blog - ESPN
Turning point: When Georgetown took that 10-point lead in the first half during NC State’s drought, the Hoyas looked like they were ready to go for the kill. But they didn’t. They relaxed and the Wolfpack returned fire in the form of a 28-7 run that started in the first half and ended in the second.

Eye On College Basketball - CBSSports.com Georgetown making a habit of first-weekend flameouts
Everyone will say Georgetown is one of the toughest teams in the country to prepare for, given its tough-to-defend offense and versatile defense. However, I think the opposite. You know what you're going to get with the Hoyas. You're going to need to defend a Princeton-esque offense that utilizes plenty of backdoor cuts, and you're going to have deal with plenty of length and switching defenses at the other end. It's difficult, sure, but there are no surprises with the Hoyas. You know exactly what they're going to do.

2012 N.C.A.A. Tournament — N.C. State Sends Georgetown to Another Early Exit - NYTimes.com
After President Obama selected North Carolina State to advance to the Round of 16, Wolfpack Coach Mark Gottfried sought to explain the pick as simply a move to curry favor among the state’s voters in the coming presidential election.

The Pack is back | The Montgomery Advertiser | montgomeryadvertiser.com
It's been a long time since North Carolina State was mentioned in the same breath with the elite programs in the nation — let alone its own state.

NC State Is In The Sweet Sixteen - Backing The Pack
NC State beat Georgetown 66-63 on Sunday to advance to the Sweet Sixteen. I can't believe I just typed that sentence.

Georgetown is doubled over again by N.C. State | Washington Examiner
A heartbreaking defeat wasn't going to keep Georgetown from taking pride in the expectations it had defied all year. It didn't make the third-seeded Hoyas' 66-63 loss to No. 11 N.C. State, an upset in name only, any easier to accept.

Wolfpack End Hoyas' Season - Sports - The Hoya
For now, Georgetown is left to reflect its overall season, one filled with tremendous victories but even closer losses — by four points to Kansas in Maui, by three at Syracuse in overtime, by two in double-overtime to Cincinnati in the Big East tournament and now a three-point loss to NC State in Columbus. All were tough losses for a team that that proved everyone wrong yet never bragged about it.

Mega recruit Nerlens Noel narrows list to Kentucky, Syracuse, Georgetown - NCAA Basketball - Sporting News
Scouts say Noel, a 6-11 center from Everette, Mass., is the best shot blocker of a generation, and every top-flight college coach has been recruiting him. With his Sunday announcement, that means he has dropped North Carolina and UConn from his list.