Sleeping with the Enemy: The Wolfpack of N.C. State

Share All sharing options for: Sleeping with the Enemy: The Wolfpack of N.C. State

A berth in the Sweet Sixteen of the 2012 NCAA Tournament is on the line as your Georgetown fighting Hoyas take on the N.C. State Wolfpack in a brunch special, and as usual we here at THE GLOBAL PHENOMENON are bringing you everything you need to know about Georgetown's next opponent. Special thanks to our old Wolfpack buddy Backing the Pack for providing answers to our hard-hitting questions. Gentlemen, this bud is for you. After you're done reading this pleasant exchange, check out our answers to their questions RIGHT HERE. Let's get to it, shall we? We shall indeed! 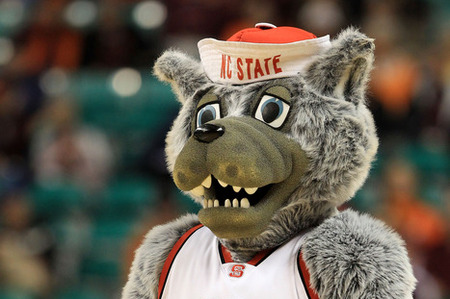 Is it me or does this thing look drunk?

Hey, thanks for having me. Love the show.

More fun with N.C. State after The Jump:

Tell us about NC State. Who are the best scorers? Rebounders? Who is the guy that Georgetown is neglecting in its scouting report that will come back to haunt us?

For the most part, the core of the team is the same as it was when y'all saw us last year. Lorenzo Brown has become a difference maker at the point; his jump shooting can be a bit spotty but he has good athleticism and he finishes strong at the rim. CJ Leslie has taken his play to another level over the last few weeks, and he's finally looking like the five-star recruit he was supposed to be. No range whatsoever, but he's incredibly quick and athletic.

Richard Howell is our rebounding ace--he's one of the best in the country at both ends of the floor. He also has a decent midrange game, but he seems to get in foul trouble every game. That's a huge issue for us, because he means a lot to State's fortunes.

Scott Wood is almost exclusively a three-point shooter, but he's active at the offensive end and at this point in the year he's good at working through our sets and reading the defense to create openings. The Hoyas have to be aware of where he is at all times.

Beyond them, we get into the role players. If there's anyone Georgetown is neglecting in scouting who could come out and have a good game, it's CJ Williams. He's been absent of late, but his improvement this year has been drastic--his mid-range game is outstanding.

Compare and contrast Mark Gottfried and Sidney Lowe as coaches both on a game level and on recruiting trail. How much happier are you these days?

I don't even know where to start. Everything is better now. We actually have a plan to attack opponents and a general grasp of how to go about executing said plan. This is major progress. Lowe didn't do a bad job recruiting, but what Mark Gottfried has done is unprecedented: we've never brought in three McDonald's All-Americans in one class.

Is this tournament already a success or do you need a Sweet 16 berth to be truly happy with the season? How far can this team go?

I don't think anyone realistically thought this team would reach the NCAA Tournament this season (it's telling that there was a clause in Gottfried's contract that gave him an automatic two-year extension if he made the NCAAs in his first of second season), so we're well into the gravy zone now. If this is as far as we go, I'll be sad, but there's no question this year has been a success.

How far can they go? It's hard to see the Pack getting by Kansas, should both teams advance. I love the way we're playing right now and I think we can be competitive against every team in this bracket, though.

Does CJ Leslie go to the NBA after this season? If not, considering the incoming recruiting class, should the Wolfpack be considered a top 15 team next year?

A month ago, I'd have said no way. He's been playing so much better since then though that now I'm not sure. I'd love to have him back for another year and I think it would do him good to refine his game. He's still raw in a lot of ways. But he also has the sort of athleticism that makes NBA teams reach for potential.

With him back, I love this team next year. I don't know if it's top 15, but it'll be the closest thing we've had to it in a long time. Without him, I don't think NC State takes a big step back, but any sort of preseason ranking is probably generous. 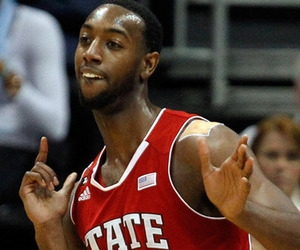 Hoyas better watch out for this dude. via www.lasvegassportsbetting.com

You guys are the oft forgotten third wheel on Tobacco Road. How satisfying was Lehigh's win on Friday night? Who do you hate more - Duke or UNC?

I enjoyed that Lehigh win probably more than I had any right to. I'm an exception on this one for sure, but at least when it comes to basketball, I hate Duke a lot more. I'd actually place Maryland behind Duke and ahead of UNC on the hate list. Don't get me wrong, I'd enjoy seeing Tar Heels fans die in a slow-burning fire, especially the logic-impaired, self-awareness-deficient adopta mater clowns. But there are tiers. This is not 'Nam, Dude, there are rules.

I'm in Raleigh, NC for one night. Where am I going for the best meal and what should I order? Where's the best bar to meet a nice co-ed?

If you were looking for the best meal, you'd probably have to go to the Angus Barn for a steak. Peyton Manning-approved! If you'd prefer a good taste of NC barbecue, you can't go wrong with The Pit downtown. 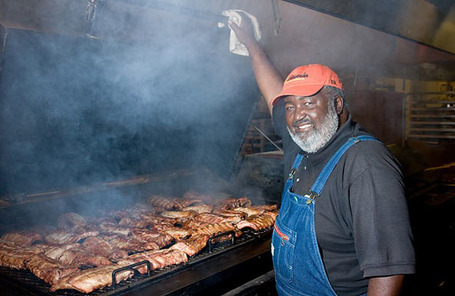 Documented goodness at The Pit. via www.blogcdn.com

As for coed bar options, there are some spots on Hillsborough Street across from campus. Nothing really iconic there, but enough cheap destinations to bring out the students. Other than that, most kids will be on Glenwood Avenue downtown, and as far as picking out coed-saturated bars, you just kinda know those when you see 'em, y'know?

Who are the four teams going to New Orleans? Who ends up cutting down the nets when it's all said and done?

I had Missouri in the Final Four, so I have no clue. I'm a guy who went "Frank Haith? Sure, that's a great idea!" Don't listen to me. There's probably no stopping Kentucky though.

Size has been an issue all season. Howell can be soft around the rim, and I wonder if maybe the height thing gets into the heads of our guys. San Diego State is the perfect example of what the Pack can handle, especially inside.

Teams that don't turn the ball over very often tend to be a nightmare as well, because we don't do a good job of forcing mistakes in general.

How does this game play out? What is the final score?

I will take Georgetown by 30.