The Casual Awards: Yes We Can!

Share All sharing options for: The Casual Awards: Yes We Can!

The Georgetown Hoyas took its first step to NCAA Tournament glory yesterday by crushing the Belmont Bruins by a score of 74-59 to advance to a showdown with N.C. State tomorrow afternoon. Though we here at THE GLOBAL PHENOMENON would love the chance to relax after the win and drink a few cold ones on this glorious St. Patrick's Day, we won't stop 'cause we can't stop so instead we're handing out some hardware to those most deserving. 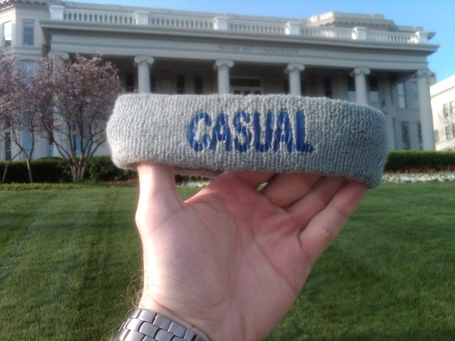 Belmont University has been Casual'd.

The Chris Wright Heart of a Champion Award:
Jason Clark. It's amazing how much better this team looks when Clark is on his game. Clark put the Hoyas on his back early and often, finishing with a game high 21 points on 9-12 shooting and just two turnovers in 34 minutes. This is the Jason Clark that Georgetown will need to advance to delusional distances in this Tournament, and hopefully he has put his uninspiring Big East Tournament performance behind him.

Patrick Ewing Award for Post-Season Excellence as a Freshman:
Otto Porter, who through three post-season games, is averaging nearly 17 points on 66 percent shooting to go with 7 rebounds and a block. As impressive as Porter's offensive uptick has been, his defensive dominance continues unabated. What's more, the freshman seems to approach each sweet mid-range jumper, defensive closeout, rebound, as if he's a seasoned veteran. Every morning I wake up and count our lucky stars that assistant coach Robert Kirby, who led the Georgetown recruitment of Porter, apparently knows every person in the country to ever have touched a basketball. 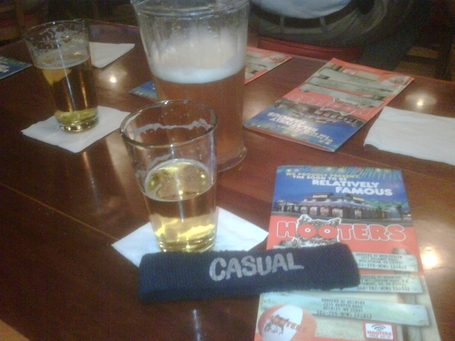 Keeping it casually classy at Hooters in Richmond, Virginia 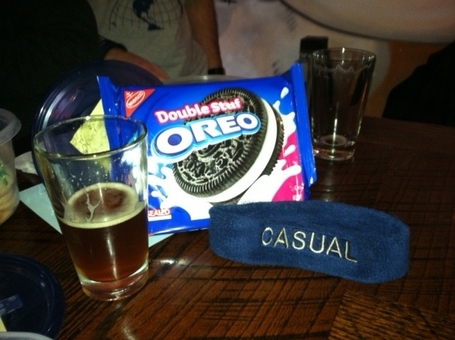 Keeping it casual at the Iron Horse in DC with a casual delicacy. 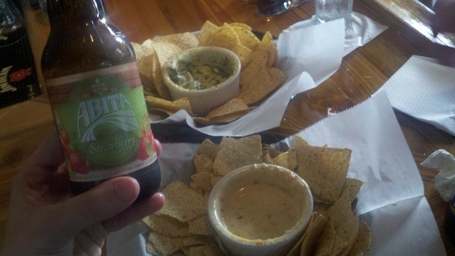 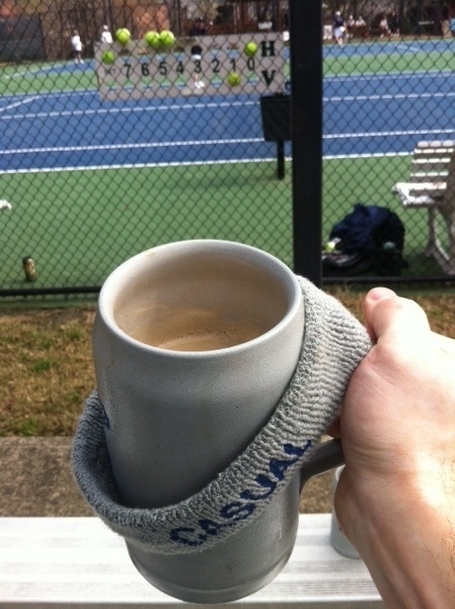 Ringing in St. Patty's day with a Guinness-filled Hofbrauhaus mug

Winston Wolf Award for Focusing on the Task at Hand:
Named for Harvey Keitel's memorable character in Pulp Fiction, this award goes to the Georgetown Hoyas. The Hoyas deserved to be relieved and elated for not just finally winning a tournament game, but doing so in emphatic fashion. But judging from post-game quotes yesterday, the men in blue and gray are solely focused on dispatching N.C. State tomorrow.

Doug Gottlieb Award for Excellence in Analysis:
Seth Davis, who guaranteed that Belmont would be in the Sweet Sixteen. Runner up for every boob who employed the logic that Belmont had lost every tournament game it had played in and so was due for an upset while Georgetown had lost its last three tournament games and so was destined to fail. Honorable mention to anyone who thought that Belmont should be given extra points for hanging with a Duke team that basically plays like a better (or, last night, not better) version of a mid-major team.

The WRONG Way to Relax Award:
FSU/St Bonaventure. Don't feel like the stress of Georgetown surely losing to Belmont, why not enjoy the ACC-champion Seminoles beating up on the Bonnies? WHAT A CATASTROPHE! How does that finger-lake D-3 school run even with the Noles? Isn't Leonard Hamilton paying his players enough? Thank god the Bonnies couldn't add and played for, and missed, a game-losing two-point shot or a a desk would have been out the window onto 14th street. Wait. They Hoyas won going away? Dammit. IT IS SO HARD TO RELAX.

Fat Alumni Award:
I'm not going to suggest that all of Georgetown's famous alumni are trim, but former Belmont Bruin Vince Gill has put on a lot of weight since we last throttled these guys back in 2007.

Bombs Away Award:
At one point during the game Belmont had attempted 15 field goals, 12 of which were from three point range. Belmont finished with a whopping 27 three point attempts, making 10 of them. Though I'm sure Belmont enjoyed lots of success from long distance in the Atlantic Sun all season long, GEORGETOWN ISN'T THE SAME AS LIPSCOMB YOU JERKS!

Taking Care of Business Award:
That win against Belmont was nice, but Georgetown's path to the Sweet Sixteen travels through yet another double digit seed in N.C. State tomorrow. N.C. State was 0-8 against Top 25 competition over the course of the season and though they are playing at a higher level right now, the Hoyas need to beat these guys in order to erase the memory of NCAA Tournaments past.

310.65 Miles Award:
It is approximately 310 miles to travel from Washington DC to Columbus, Ohio and I hope that Hollis Thompson's NBA-level jumper makes it to the arena on time for the game against N.C. State. Against Belmont Hollis finished with a ridiculous 6 points on 3-9 shooting and was outplayed by freshman Greg Whittington. 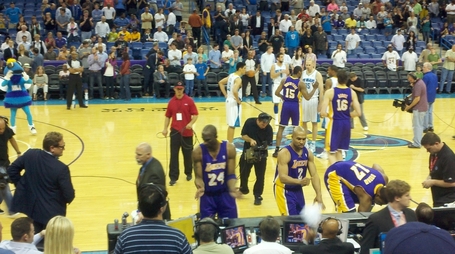 Cringe Award:
Nate Lubick. The stats will relay that Lubick played a pretty good game against Belmont, and maybe he did. But that stretch were he committed three consecutive turnovers on the offensive end and two fouls on the defensive end helps feed Lubick's throng of doubters who all seem to scream "NO!" whenever he touches the ball.

Banned Award:
You may or may not have noticed that bloglord Hire Esherick hasn't been around much lately. In order to shake things up around here in an effort to get this blog its first postseason win, we shipped Hire to picturesque Bali where he has been forced to watch the games via coconut while sipping on boat drinks. 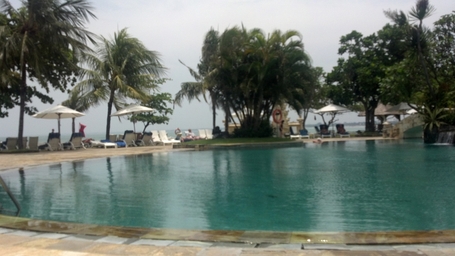 Hire Esherick has been sent to Bali.

Mel Gibson Award for Patriotism:
The Lehigh Mountain Hawks/Engineers, for upsetting Duke. Lehigh, you have selflessly performed an invaluable service to your country by exterminating a true threat to happiness and liberty.

Jim Nantz Award for In-Game Commentary:
1600+ comments set a new record for Casual Gamethread commentary in the shot-clock era. For me to go through them all and pull out a few for casual display would be a disservice to all who helped us achieve this monumental victory, so, eh, fuck it, here goes: 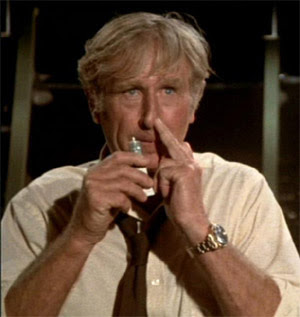 Document your room service in Ghana Steak, jollof rice and the largest Star bottle they have on offer. If we win I’m jumping in the hotel pool. If we lose I’m drowning myself in the Bight of Benin.

I dont think I can handle being on here for the game.

we’re still in this.

Also, he’s fat and pasty and looks about 15 years older than he is. Don’t think his TV gig will last much longer.

belmont's having a tough time getting shots

Do these guys shoot anything but threes?

Some shithead hits a 3

AND YOU WILL NOT TAKE IT FROM HIM

Courtesy of slingbox in France…

I have craved Applebees for the last two months

due to these fucking commercials during basketball games.

YOUR ONLY JOB AS A GTOWN FAN

is to be fucking nervous all the fucking time. If you give up your nervousness for one damn second, the world absolutely will end. DO NOT EVER STOP BEING NERVOUS.

"MY ENTIREING SYRACUSE FANDOM, AT LEAST FOR * I CAN REMEMBER, IS GIGANTIC DISAPPOINTMENT"

Hey Syracuse! Hope you have a FABuLESS tournament!

IN THE THIRD ROUND.

The Georgetown Hoyas are a nationally ranked powerhouse won an NCAA Tournament game!