Welcome to the greatest time of the year! Though the Hoyas don't play until tomorrow (THANK GOD), plenty of drama will unfold today, including the evil Syracuse Orange against America's Team, UNC-Asheville. So kick back, relax, tell your boss to get bent and after you're fired, enjoy this first day of the 2012 NCAA Tournament. 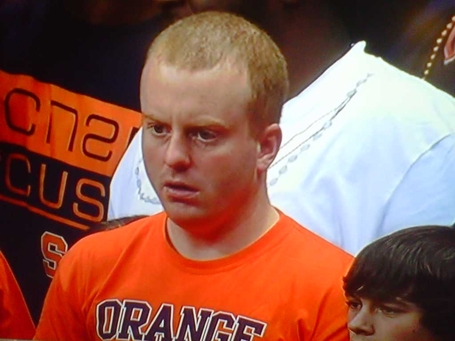 Full schedule of games, times, and channels after The Jump:

Here are SB Nation's rankings of today's best games and a blurb on each:

Mike Moser, UNLV's do-everything forward, is a tremendous talent, one you might want to see before he eventually makes it to the NBA. But the Buffaloes are the automatic bid team from the Pac-12, which was possibly the worst power conference in college basketball history this season (Cal's curb-stomping by USF lends that theory some credence), and just came off a tournament in which they won four games without scoring more than 70 points. That this is the last game of the day and buried on truTV says plenty.

The fantastically-named De'Mon Brooks and the less creatively-named Jake Cohen make Davidson slightly more physical than the typical mid-major champion. But Louisville has physicality in spades (...full of gravel that Rick Pitino's team mined out of a quarry while grinding out a Big East Tournament title), and could make this one of the day's most grueling contests.

Ohio State has far too much talent to fall to a No. 15 seed, even one piloted by the endlessly irreverent Jimmy Patsos, and should cruise. It might still be worth tuning in late at night to see Patsos deal with a 15-point deficit 15 minutes in.

South Dakota State sniper Nate Wolters is worth finding truTV on your cable box/satellite service/online stream, but the Jackrabbits don't have a ton beyond him, and don't have a player on their roster taller than 6'9. That bodes ill for a game against tall and talented Baylor, as long as the Bears are awake.

Kentucky's star-studded roster is going to give the 'Cats a bit of a boost in any "objective" ranking of "watchability," certainly. But John Calipari's team should roll over Western Kentucky, which finished the season with a losing record and likely spent the balance of its March magic budget with a stirring comeback over Mississippi Valley State on Tuesday.

The first game of the 2012 NCAA Tournament proper need not be a barn-burner for the Tournament to be great, but the Racers and Rams might well produce one. Murray State might feel a bit underseeded (and, consequently, miffed) considering its stellar, loss-light season, and Colorado State is rife with undersized shooters.

The Aggies are better than you think (they snare a bigger percentage of offensive rebounds than Kansas State does, and that offensive rebounding has been touted by some as the Wildcats' way to solve Syracuse) and have half an All-Name team: Christian Kabongo, Wendell McKines,Hernst Laroche, Bandja Sy, and Tshilidzi Nephawe all play minutes for New Mexico State. And Indiana, now missing starting senior point guard Verdell Jones, out with a torn ACL, is vulnerable away from home, which bodes ill for a game in Portland.

The Wildcats have a better profile than you would expect for a No. 8 seed (top 50 in offensive and defensive efficiency, according to Kenpom.com), and the Golden Eagles have a less impressive profile than you might want in a No. 9 seed (out of the top 50 in both offense and defense). All of Southern Miss' eight losses came away from home, and this game's in Pittsburgh, further than Brett Favre's alma mater has traveled since a November trip to Denver.

BYU's defense-optional and pulse-pounding approach to basketball makes for good games, but the Cougars were a hair's breadth from being blown out of the Buckeye State against Iona before their staggering comeback on Tuesday. After that emotional and draining game, does BYU have anything left for a Marquette outfit that has just a bit more talent than the Gaels did?

All eyes should be on Syracuse, and rightfully so: What looked like the second-best team in the country at worst to most was dealt a huge blow when Fab Melo was ruled ineligible for the NCAA Tournament. But the Bulldogs aren't your typical No. 16 seed, with a slew of hungry upperclassmen who can drive and shoot. The Orange's zone puts a premium on the latter, though, and Asheville's much better at the former.

The Huskies are so talented, it's almost infuriating; the Cyclones have a lot less talent, but know how to ride big-time big man Royce White. But if Connecticut knows how to do anything for certain, it is play compelling games: 12 of their 33 contests in 2011-12 were decided by five points or fewer.

Welcome to the NCAA Tournament, Gonzaga! You get a No. 10 seed from the Big East with one of the conference's most consistently excellent players, Kevin Jones, and a junkyard dog's brio on the boards, and you get to play that team just up the road from Morgantown in Pittsburgh. Enjoy your trip from Spokane, and make this game a battle!

Forget the "NERRRRRDS!" jokes: they disservice two rather good basketball teams. Vanderbilt finally seemed to put together its awesome pieces in the SEC Tournament, and toppled Kentucky, serving notice that the Commodores were peaking at the right time, while Harvard only saw likely its best team in school history upset Florida State by out-defending a Leonard Hamilton team. The 'Dores are a bad matchup for the Crimson, but the game could still be one of Thursday's best, and it wouldn't be too far from the Vandy blueprint to flash Final Four potential before flaming out in its first NCAA Tournament game.

New Mexico is a superb No. 5 seed without any glaring weaknesses, and just knocked off the Mountain West's other two big-time programs, UNLV and San Diego State, in the MWC Tournament. But the 49ers aren't a bad No. 12 seed by any stretch: seven of their eight losses came away from home to an NCAA Tournament team (the eighth was a loss to Cal State Fullerton that ruined a perfect Big West season by the bunch from "The Beach"), and their only major flaw is poor performance from the free throw line. Wispy guard Casper Ware is worth your attention.

On one hand, it's immensely annoying that the NCAA Tournament Selection Committee routinely sets up mid-major vs. mid-major matchups in the Round of 64, and often in 5-12 games, as if eradication of the pesky lesser-moneyed schools was an unspoken goal. On the other, we're going to get probably the nation's best mid-major (Wichita State might be underseeded as a No. 5, which is still the best seed a non-power conference team got), and the nation's best-known mid-major, VCU, in primetime on CBS.

Oh, and VCU can play swarming defense that hellhounds would envy, the Shockers' Joe Raglandmight be the nation's best shooter, and Wichita State starts a guy named Toure' Murry. I might have slotted this game in the top five for him alone, but this is the can't-miss, must-watch game of the day.

And now a word from our sponsor!

"Yahoo! Tourney Pick'em supports SBNation and the best college sports tournament of the year. Join the bracket pools of Drew Brees, Michael Phelps, and Lil Wayne-- all while competing in the $5 million Perfect Bracket and $10,000 Best Bracket Sweepstakes. Be part of the best and biggest Yahoo! Sports tourney game yet – sign up today (read: right now because time is running out!) by clicking HERE!"

Thank you, Yahoo! We love Yahoo!