Sleeping with the Enemy: The Bruins of Belmont

Share All sharing options for: Sleeping with the Enemy: The Bruins of Belmont

Well, here we go. Though we have undoubtedly enjoyed ourselves with all of the fabulous news over the past couple of days, like it or not the 2012 NCAA Tournament is about to begin. Your Georgetown Hoyas are rested and ready for action tomorrow, and as usual we here at THE GLOBAL PHENOMENON are bringing you everything you need to know about Georgetown's first round opponent. Special thanks to my dogs at The Byrd Cage, the surprisingly casual blog for all things Belmont Bruin, for providing answers to our hard-hitting questions. Gentlemen, this Jack Daniels is for you. After you're finished reading this pleasant exchange, check out our answers to Belmont's questions HERE. Let's dance! 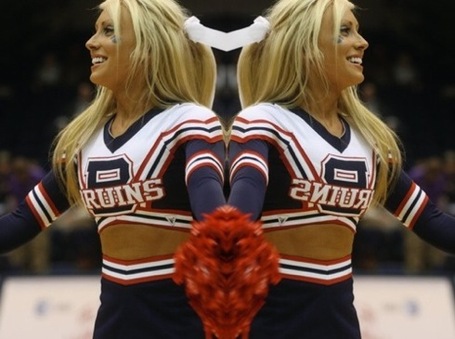 I'm not sure. via frathousesports.com

I don't even know you and I already hate you. Does this make me a bad person?

Who was it that said, "Fear breeds hate"?

More fun with Belmont after The Jump:

This Belmont team is a very good team. We are ranked 4th in the nation in points per game, 5th in assists per game, 17th in field goal percentage. We are the 11th most offensively effective team in the nation. Point guard Drew Hanlen is ranked 8th in the nation in effective field goal percentage. Our two bigs, Mick Hedgepeth and Scott Saunders combine for an average of 10 rebounds a game. The guy you aren't paying attention to is Blake Jenkins. Since we started him halfway through the season, we have gone on a 14 game winning streak. His individual stats may not scream extraordinary, but if you read The Byrd Cage article "The Blake Jenkins Effect" you can see that our team shooting percentages jump about 10% when he starts. That is a big, unselfish number.

If you look at the RPI, and many Hoya(s) faithful have already pointed this out to me via Twitter, you will see that Marshall was our best win. We could also talk about an MTSU or TSU, but you guys probably don't care about that. I think we see the full potential of this team when you notice our first game of the season at Duke. We played them to within a point at Cameron Indoor on their opening night. While I hate being labeled "The Team That Almost Beat Duke-Twice", I think the game is valuable in the way that it shows our potential as a team. We can play, and hang with the big boys. In fact, we might be just be a little tired of "hanging" with the big boys.

Teams with large shooting guards or penetrating 3-point shooting forwards. I can see Georgetown fans smiling right now. But Belmont destroys teams with their shooting. We can go toe-to-toe with anyone when we are shooting to our full potential.

Judging by the media's reaction, you'd think Belmont is the #3 seed and Georgetown is the #14 seed. Does this make you nervous? Would you rather be the little engine that could and sneak up on everyone?

Last year was very exciting. Belmont got some serious national press, we were picked to upset Wisconsin by some big names- and that just didn't happen. I think the Bruin faithful might be a little nervous about the national spotlight right now as it didn't bode well for us last season. And to be fair, you may be pushing the Belmont spotlight a little too much. I've seen many pundits not buying Belmont this year and projecting your Hoyas to go to the Final Four.

How far can you see this team going? Would a win over Georgetown for the first NCAA Tournament win in school history be enough for this tournament to be a smashing success?

If Belmont can beat Georgetown, then we are in the Sweet 16- and then it is bring on Kansas. In all seriousness, I can see this team going to the Sweet 16. Credit NC State and San Diego State, but a Georgetown win would be too big of a win to lose the next game. I can't speak for all of the fans, as many are demanding the Sweet 16, but I would consider a win over Georgetown- how did you put it? "A smashing success."

Tell me a bit more about Nashville, TN. If I were to tell you that tomorrow you had to move from Nashville and never come back, where are you having your last meal? What are you ordering?

Nashville is a wonderful place. We are labeled as Music City, and we definitely have plenty of music- but Nashville at its core is a thriving, artistic city in every meaning of the word. Sketch comedy, photography, coffee shops, local bicycle shops, and community gardens are just a few of the things that might be considered Nashville these days. From the Top Chef Asian-fusion stylings of Arnold Myint's 4 restaurants, to the local burger joints that focus on local, farm-raised, humanely treated beef, to the all wonderful Meat-And-Threes (might need to Google that if you don't know), to Prince's Hot Chicken- food is plentiful, eclectic, and wonderful. From the Patterson House, a prohibition era styled bar that ranked in GQ's Top 25 best bars in the nation, to the downtown Honky Tonks, Nashville is growing the scene in both high end cuisine and wonderfully tacky tourist traps. But if I had to leave Nashville, I wouldn't go without a trip to Sunset Grill for either a high-end dinner featuring some sort of wild game with seasonal ingredients or the Chicken-Black Bean Nachos on the late night menu. Wow, I should be a part of the Nashville Tourism Committee... or something. 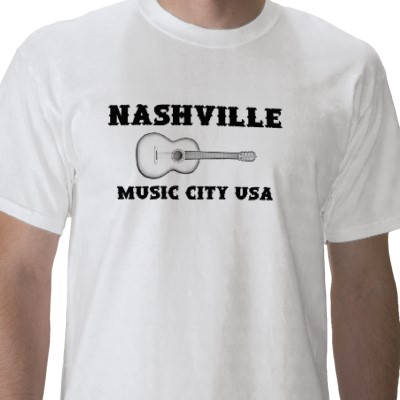 A Casual Hoya reader goes to law school at Vanderbilt and said his roommate hooked up with an undergrad from Belmont. He said she was a scientologist. Is this a common trend?

Belmont is identified to the public as a private Christian university that values their strong Baptist heritage. I, personally, have never met a scientologist on the campus. Belmont is growing by leaps and bounds, so Scientology is not surprising to me to see on the campus. The other day I saw a preacher saying our students were going to hell, and he was screaming it in the middle of campus. The students responded with some very loud 80s Hip-Hop on a Boom-box and ultimate frisbee. Not something you see everyday, but an interesting glimpse into student life, nonetheless. 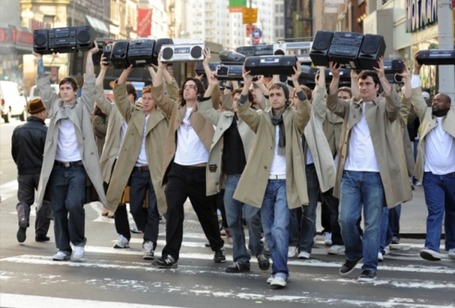 Student revolt at Belmont via beatcrave.frsucrave.netdna-cdn.com

If I told you I thought Belmont alum Brad Paisley's music sucked, what would you say to me?

Them's fighting words 'round here. Not really. I'm not the biggest Brad Paisley fan, so I would not be offended. You would be surprised at how many Belmont students don't actually like country music.

Where is the best place to see live music in Nashville? Where is the most overrated place?

The Ryman Auditorium is a truly magical place. Every time you see a band play there, they always mention how humbled they are to be playing in the Ryman. I am always thankful for living in Nashville every time I sit down in a Ryman pew to hear a band. But, if you are just out and about wanting to hear music? The best place to see live music- Robert's Western World. Most overrated? Tootsies. But you still need to go at least once. 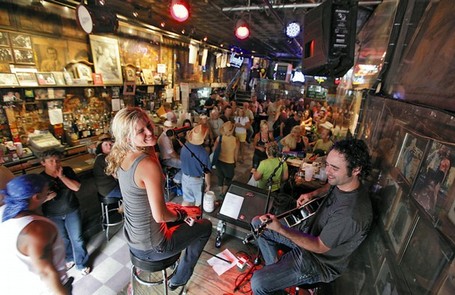 Tootsie's is overrated. via media.knoxnews.com

Who do you see going to New Orleans for the Final Four? Who ends up cutting down the nets?

Kentucky, Ohio State, North Carolina and Missouri. I'm going with Ohio State to cut down the nets. Some of the best basketball players in the nation are being overlooked on that team at just the right time for the Buckeyes to make it all the way.

Is Georgetown the #3 seed you'd most want to play of all the potential opponents? If not, who would you have rather played?

I thought I wanted Florida State, and then I saw them in the ACC Tournament. I'm okay with Georgetown, I just didn't want Baylor.

You realize that if Belmont wins this game, I will potentially lead Hoya fans on a Jim Jones-type excursion resulting in mass suicide. Are you ready to cause such destruction?

The Byrd Cage is not responsible for any actions Casual Hoya readers may take after the game...

So, we have Syracuse as our biggest rival. Which school do you despise the most and why?

Lipscomb. I hate the word. But in all seriousness, Lipscomb and Belmont are the closest geographic NCAA rivalry. We came from the NAIA together to the NCAA, and games are always completely packed. They call themselves the Lipscomb Bisons. Yeah, they put that "S" at the end. Decide which team you would pull for after hearing that.

Georgetown ranks 234th in the NCAA in tempo with 63 possessions per game. Belmont is used to a bit more than that. Some people are saying this reminds them of Wisconsin last year, but Bo Ryan still has you guys beat when it comes to controlling the pace of the game. I see this game coming down to the last five minutes pretty close. I think you will get a decent lead on us at the beginning, but we'll start dropping some threes in the second half. The Bruins will pull away with 2 minutes left and win with the score 72-64. And I will cry tears of joy into my delicious Yazoo Pale Ale.

I'm looking forward to a good game. Thank you, Casual Hoya, for having us. Feel free to agree or disagree with our previews on BelmontByrdCage.com

(Casual Note: How about I just feel free to have the Hoyas dunk on your faces and crush your souls. Cool?)