The Voice of the Hoyas: An Interview with Rich Chvotkin

Share All sharing options for: The Voice of the Hoyas: An Interview with Rich Chvotkin

Last year at this time, we brought you an interview with former Hoya and your 42nd President of the United States of America, Bill Clinton. In order to top that piece, we figured that the only man who could possibly mean more to Georgetown is the current "Voice of the Hoyas" himself, Mr. Rich Chvotkin. 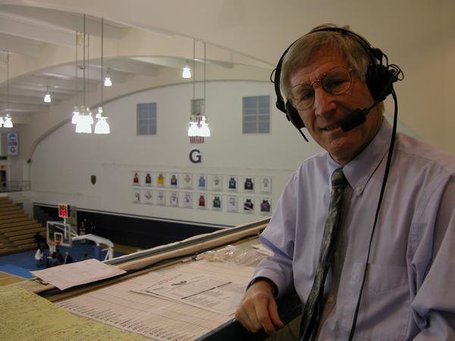 For those unfamiliar, Chvotkin has called more than 1000 Hoyas games since 1974 and has been behind the microphone for every memorable moment in Georgetown basketball history. His legendary catchphrases such as "vesper half", "muscle and tussle," and "hooker in the lane" have, naturally, inspired drinking games among current students and alumni alike, and of course his exuberant signature call of "Hoyas Win!" at the conclusion of each Hoyas victory brings a smile to every Hoya's face. As the Hoyas get set to do battle in the 2012 NCAA Tournament, Mr. Chvotkin was able to take a few moments to answer a few Casual questions via email.

More with Chvotkin after The Jump:

What inspired you to record yourself calling Georgetown basketball games and send it in to Coach Thompson? What was that initial conversation with Coach like?

I was always a college basketball fan, and when I came to Washington, D.C., I came to a few games, including Georgetown, American, GW and Maryland. Georgetown didn't have any commercial radio, and since I did this in undergraduate, I was looking for an opportunity to do what I enjoy.

I made demo tapes at McDonough and at the Capital Centre, and submitted them to Coach Thompson. However, there was no radio station and no advertising. Even after I was named "The Voice of the Hoyas," I still had to find a radio station to put us on the air and go out and sell advertising to support us.

Is it hard to just sit back and watch a game without a mic in front of you? Do you ever find yourself doing play-by-play for games you are not actually calling?

At times it is, because you're so ingrained in doing this on a regular basis, of course it's hard to turn "it" off. I don't do it in front of a TV, but I do catch myself calling a game while watching live from time to time.

Which Georgetown team was the most fun team for you to cover?

There have been so many great teams, I think it's hard to single out one team. Each team had it's own style and flavor. They all hold a very special place in my heart.

You're relatively new to Twitter (@HoyasWin). How has the internet impacted the way you prepare to call a game?

The Internet has allowed me to do more research, opening up a whole new avenue of information. You really have to give credit to the sports information people, especially our own Mex Carey, who do such a great job preparing the information that we use on a daily basis that make our broadcasts complete and always make sure we have what we need.

As a radio guy you need to paint a picture of what is happening on the court or at the arena for those listening at home. Have you ever listened to one of your calls after the fact and thought you did a poor job? If so, any specific one you can recall? Conversely, any specific you are really proud of?

There is no review process per se, but of course I'll listen while we're doing highlights in-game or after a game has just concluded. It's enjoyable to hear some of the calls that have described action that has impacted the end result of the game. Hollis Thompson's three-pointer at Alabama and Henry Sims' dunk against UConn stick out in my mind this year.

What is the single most exciting call you ever made?

There have been so many great game ending calls, including Don Reid's putback of the Iverson miss versus Weber State (#9 in this great clip of the Tournament's buzzer beaters), Jeff Green's game winning shot versus Vanderbilt to keep the Hoyas alive in 2007 NCAA tournament (below), Charles Smith's 1988 drive against Syracuse and Charles Smith's shot against LSU in 1988 to win the game are some of the most memorable for me.

Hopefully Hoyas fans will be hearing quite a few more of Chvotkin's "Hoyas Win!" calls throughout the month of March.