Sleeping with the Enemy: The Bulls of South Florida

Share All sharing options for: Sleeping with the Enemy: The Bulls of South Florida

The Georgetown Hoyas (17-4, 7-3) take on the upstart South Florida Bulls (13-9, 6-3) in the way too damn early game at Verizon tomorrow, and as usual we here at THE GLOBAL PHENOMENON are bringing you everything you need to know about Georgetown's next opponent. Special thanks to Voodoo Five, the most casually named USF blog in the galaxy, for providing answers to out hard-hitting questions. VD5, this bud light is for you. Our answers to their questions are right here. 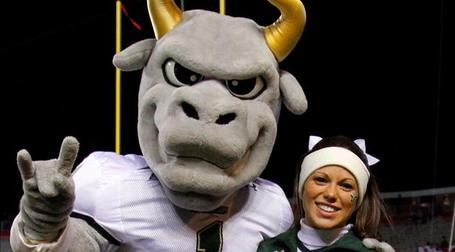 It appears that you guys have really found your way since the start of Big East play. Do you see this continuing for the next 9 games? What do you think your final record will be in conference play?

There's no way we finish Big East play at 12-6. We have two against Pitt, @ Georgetown, @ Syracuse, West Virginia, @ Louisville, Cincinnati, Villanova, and @ Providence left. If we can find six wins out of that, Stan Heath should be awarded Big East Coach of the Year no questions asked.

I think we will end up at 9-9. We should be able to beat Providence, Villanova, and at least split the Pitt home and home. Anything more than that is an added bonus.

More fun with USF after The Jump:

Pick a name out of the hat and that's our best scorer. Right now its Toarlyn Fitzpatrick who had 19 points against Marquette and 15 against Providence. The 6'8" junior can score from anywhere on the court and is our beset 3-point shooter. If he gets going Jawanza Poland is an athletic wing who is amassing a pretty spectacular dunk portfolio.

Our best rebounder is easily Ron Anderson Jr. While Augustus Gilchrist gets his fair share, Ron always seems to be in the right position and will out work most everyone. He is amazing at getting offensive boards, and is good for 3 putbacks a game at least.

Biggest surprise is easily freshman PG Anthony Collins. Heath was raving about Collins during fall camp, but I didn't think he would be this good this quickly. He's a pass first guard who has an extremely fast first step and can get past most opposing guards. He has court vision we haven't seen out of a point guard since Reggie Kohn and he is even starting to gain confidence with his outside jumper. Its really like night and day with Anthony Crater last year.

Biggest disappointment I guess is Augustus Gilchrist. He hasn't been horrible, but you expect a little more consistency from a guy with Gus' skill set.

If you were to start your own university tomorrow, who is your first choice to run your program of the Big East coaches? Who is your last choice?

Just for the fact that he's doing what he has with the roster, its Mike Brey. No one has done more with less, and if I'm starting a program I need a guy who can get as much as he can out of each kid.

People are going to question this, but to me its Calhoun. He's marred by more than a few recruiting scandals, his health is declining, and I don't think he lasts more than a few years before moving on to yelling at 8 year olds in his granddaughters YMCA league.

We've asked that question to other blogs, and almost universally, the answer to last choice has been Stan Heath. Do you want to fight people because of that answer, or do you agree?

I don't agree with it, but I'm not going to fight anyone because of it. Heath has had a tough time recruiting with the shambolic facilities, but things are starting to turn around. The Sun Dome is currently being completely renovated, and the 50,000 sq ft Muma Basketball Center opened up this fall. The 5 person class we have is by far the best group Stan is bringing in, and it looks like we already have a solid group forming for 2013.

Its going to take a while for USF to turn the corner and compete consistently in the conference, but you can see the first steps are finally happening.

I'll give it a 6. The first few years were a complete rebuilding project after the Robert McCullum era and he has taken us to the NIT. I think his biggest attribute is changing his style with the roster he's been given. Stan would like to run, but we don't have the depth so we slow it down to Wisconsin levels.

I don't think his late game instructions have hit home as we blew a huge lead last year vs Marquette and almost gave away the Providence game Saturday. Other than that I've been happy.

Are you angry that your school will no longer be the most random school in the Big East once conference realignment kicks in? What do you make of the whole thing?

Not angry just disappointed that the whole conference is being blown up. UCF, Houston, and SMU just doesn't sound as nice on the schedule as Pitt, Syracuse, and West Virginia. Playing Boise on the blue turf will be fun and hey we might have one of those fancy rivalries you guys all talk about with UCF.

And this might be good for USF basketball. SMU and Houston are horrible, and UCF might be destroyed for the near future after being labeled a repeat offender for some pretty insane recruiting violations. We might be the 10th best program in the Big East now instead of the 13th. PROGRESS!

When all is said and done, who will be the top 4 teams in the Big East? Who is most likely to collapse down the stretch?

I think Syracuse, Marquette, and Georgetown are locks for the Top 4. The next five teams all have a chance for the 4th spot, but I'll just say West Virginia. Kevin Jones is playing some brilliant basketball and if Good Truck Bryant shows up, they will be tough to beat.

For the collapse, why not put USF. While I don't think Notre Dame can keep this up with their extremely short bench, the schedule is going to be tough to overcome for Coach Heath.

Tell me why an 18 year old should come to USF instead of the U, Florida, or Florida State?

Because if you actually want to enjoy going to places not in the middle of the woods or near the vicinity of Governor Skeletor Rick Scott. USF is undergoing a transformation into a quality education, some pretty awesome bar scenes in the area, Busch Gardens, a couple of beaches nearby, and free beer tours at the Yuengling brewery just blocks from campus. If that doesn't convince you, I don't know what will. (Casual note: I drink the fuck out of Yuengling).

It's your last meal in Tampa, Florida. Where are you going and what are you ordering?

As a red-blooded American male, you'll be finding me at Bern's Steakhouse getting the 25 oz Porterhouse. Yes its expensive, but you have to leave on a high note. I'd also make sure to take a stroll in the Waugh Dessert Room for a hot mocha coffee and a slice of cheesecake.

Of USF alumni, who has aged less over the last 25 years - Tony LaRussa or Hulk Hogan?

Tony easily. Hulk's skin is starting to look like worn, dried out leather and I'm starting to believe LaRussa is just a robot that will live long after we are all gone. 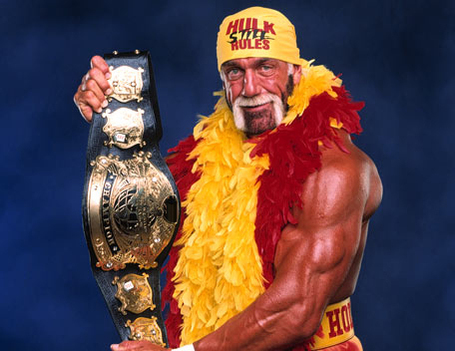 Best case: Bulls win the rest of their games and decisively beat Florida or Florida State in the National Championship. I drink heavily in celebration.

Worst case: Bulls lose the rest of their games. Anthony Collins tears his ACL and never regains his lightning quick first step. I drink heavily to dull the pain.

This feels eerily familiar to "Y'all come see Dominique Jones play!" game. A nationally ranked Georgetown easily dispatched a national power (Duke, UConn) the previous contest and have a rivalry game right after this one (Villanova, Syracuse). I could see Georgetown overlooking the Bulls and letting USF steal another game at the Verizon Center.

A guy can dream right?