The Morning After: Georgetown Turns Up The Heat On Defense In Romp Over Notre Dame

Share All sharing options for: The Morning After: Georgetown Turns Up The Heat On Defense In Romp Over Notre Dame 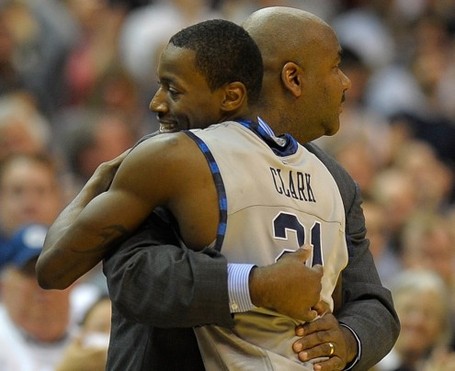 Night Line: Georgetown’s Elite Defense Will Be a Factor in March " Rush The Court
While John Thompson III’s team is always first associated with the efficient Princeton-style offense, this year’s team also locks up defensively as well as anyone in the Big East. Their methodical approach on both ends will make the Hoyas a very difficult draw in the NCAA Tournament.

Vox Populi » Postgame Roundup: Seniors lead rout of Notre Dame, 59-41
Jason Clark and Henry Sims ended their career at the Verizon Center on a high note, leading the Hoyas to a resounding 59-41 victory over Notre Dame. It was the first time the two seniors beat the Fighting Irish.

More Links After The Jump:

Notre Dame Fighting Irish vs. Georgetown Hoyas - Recap - February 27, 2012 - ESPN
In typical John Thompson III fashion, Georgetown's coach managed to focus on a negative side of Whittington's play, delivering this line with a wink and a smile: "Yeah, well, he forgot that we still need him to rebound. Because you look at this little stat sheet here: Whittington, one rebound. So he fell in love with his shooting today and forgot to do everything else."

Georgetown happy to say bye for now | Washington Examiner
Markel Starks, whom Hoyas coach John Thompson III didn't play for undisclosed reasons two days earlier against Villanova, was left out of the starting lineup for the second straight game but was first off the bench in the first half. The sophomore guard immediately helped Georgetown break free from a sloppy stretch by both teams.

College basketball: Notre Dame loses 59-41 to Georgetown - chicagotribune.com
In the fog of nonconference play, the Verizon Center hosted one of many disappointing efforts. No one believed the Irish team revisiting the place Monday was the same. But then few could believe the spectacular immolation that was in store against No. 11 Georgetown.

Georgetown vs. Notre Dame: Seniors spark 59-41 win as Hoyas improve standing in Big East - The Washington Post
"They really defended us," Brey said. "That might be the best defensive team we’ve played against this season."

NCAA College Basketball Recap - Notre Dame Fighting Irish at Georgetown Hoyas - Feb 27, 2012 - CBSSports.com
Before heading out to the court to finish pregame warmups on "Senior Day," Georgetown huddled up in a hallway with its two departing players, Jason Clark and Henry Sims. A voice shouted out: "We've got to go out with a bang, fellas! We've got to out with a bang!" Sure did.

Hoya Prospectus: Georgetown 59, Notre Dame 41
But the most impressive aspect was the team's cutting to the basket. The cuts came often and were fast and decisive. Clark and Whittington, particularly, continually forced their men to trail them as they looked for easy baskets. Henry Sims had five assists, mostly on cuts. And he and his teammates actually missed quite a few open cutters. Perhaps the Irish weren't well-prepared or maybe the Hoyas simply were clicking, but either way, those easy baskets were the key reason the team was able to put up 28 in the first half.

Georgetown does Senior Night right, beats Notre Dame - Washington Times
"That’s what Henry has done all year. That’s what we need him to do," Thompson said. "The balance between, ‘When is it his turn to score? And when is it his turn to get his teammates a shot?’ For most of the year, I think he’s been very good at that balance."

Morning Dribble: Kansas Clinches Big 12 Title, Georgetown Drops Notre Dame - SBNation.com
The Hoyas completely shut down the Irish — no one on Notre Dame even reached double figures in scoring. Sophomore Jerian Grant scored eight and had four assists and a steal, but shot just 2-12. The Irish as a team shot just 33.3 percent and grabbed 19 rebounds. By comparison, the Hoyas shot 52.3 percent with 32 boards. Guards Eric Atkins and Scott Martin led the Irish with nine points.

Notre Dame still has gas left in tank despite struggles vs. Georgetown - Rob Dauster - SI.com
WASHINGTON -- The reaction du jour from the debacle that was No. 20 Notre Dame's performance at No. 11 Georgetown on Monday night, a 59-41 loss in which the Irish had their lowest scoring output since 1983, is going to be to write off the Fighting Irish.