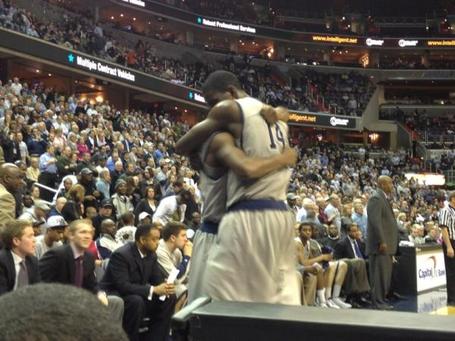 What a night. Georgetown thoroughly dismantled the Notre Dame Fighting Irish 59-41 in the most complete and dominant performance of the season. To have that performance on the night that Jason Clark and Henry Sims played their last games in a Georgetown uniform at home made it even more special. Clark set the tone on both ends, scoring 13 points and grabbing 6 rebounds, while holding Notre Dame guard Jerian Grant to 8 points on 2-13 shooting. Clark looked like a man amongst boys tonight, just better, faster, and stronger than any player on Notre Dame. Sims regained his confidence as well, scoring 12 points, grabbing 6 rebounds, and dishing 5 beautiful assists. He was menacing on both ends, attacking the glass, confidently posting up, and swatting shots as if his last name were Ewing, Mourning, Mutombo, Hibbert, or Monroe.

While this night will be remembered as a terrific sendoff for Clark and Sims, it will also be remembered for Greg Whittington's coming out party. The super freshman scored a team-high 15 points on 5-6 shooting, including a perfect 3-3 from the three point line. Whittington confidently stepped into shots on the offensive end, and used his length and quickness to help force Notre Dame to shoot 3-16 from beyond the arc.

Pure, unbridled joy after The Jump.

Georgetown beat Notre Dame in every facet of the game tonight. The Hoyas outshot, outrebounded, outhustled, outassisted, and outmanned the Irish. We've played some excellent defensive games this season, and we've had some nice offensive games as well, but tonight was the first night that I can truly say we played a complete game. I think every fan of this team has been interested to see what that would look like, and tonight we got a glimpse. The ferocity on defense, coupled with the sharp cuts, open threes, and backdoor layups make for a team that could really do some damage in the next month. Clearly, a fire was lit under this team after the embarrassing loss at Seton Hall less than a week ago, because that was the best a Georgetown team has looked since destroying everything in its path in the 2010 Big East Tournament. Of Notre Dame's 32 misses tonight, it seemed as if all five Hoyas were crashing the glass, often with more than one player's hands on the ball.

Markel Starks was much sharper tonight than he has been in the last month. After not playing in the Villanova game due to an alleged spat with John Thompson III, Starks responded exactly how we'd expect him to. He controlled the offense, made sharp cuts, didn't settle for quick jumpers, and was very active on the defensive end. A good Markel Starks is a good thing for Georgetown, although it was at the expense of Jabril Trawick tonight, who saw limited minutes. Otto Porter was all over the glass as usual, grabbing 10 rebounds to go along with 6 points.

But once again, tonight was about Clark and Sims. Both came in as part of the heralded 2008 class along with Greg Monroe, ushering in a new era of Georgetown basketball after the graduation and departures of Jeff Green, Roy Hibbert, Patrick Ewing Jr. and Jonathan Wallace. They've taken different paths to get to tonight's game, each rewarding in contrasting ways. For Clark, we've seen him grow from a skinny reserve freshman used as a defensive stopper to a senior leader who has scooped this team in his freakishly long arms and made it one of the top 10 teams in the country. Always understated and underrated, Clark has been the glue for this team, the guy who has kept us in games with dagger three pointers, and who sets the tone with his aggressive penetration and swarming defense. As a senior captain, it is impossible to ask more of him. I only hope that for his sake, Georgetown makes a deep run in March so that he gets his deserved due on a national stage.

For Sims, the path has been a bit more jagged. As has been discussed ad nauseum on this site and countless others, he came into his senior year as a disappointment, more known for his goodnatured antics off the floor than his body of work on the floor. Watching him grow from class clown to mature leader has been one of the most rewarding experiences I've had as a fan. Henry Sims as a senior is complete unrecognizable compared to Henry Sims as a sophomore. He is the key player on an offense that will be seeded as one of the top 12 teams in the country on Selection Sunday. Was that something Hoya faithful envisioned when he signed in 2008? Sure. Was that something Hoya faithful envisioned in March of 2011? Not even a little bit.

More than anything, it has been a joy to watch these two grow, especially this season as they've come out of the shadows of Austin Freeman and Chris Wright. In this age of social media, we feel like we know the players a little bit better than previous eras. We've seen Sims struggle balancing the challenges of being a 20-year-old "enjoying" college, and we've seen Clark bounce back from the loss of his grandmother to put together a scintillating senior year. Clark and Sims have provided us all with great memories, and have their team primed for a memorable March. Both of these guys deserved to go out like they did tonight, and the picture above sums it up better than any words could.