Share All sharing options for: The Casual Awards: Sucking at Seton Hall

Well, that was not good. The Hoyas were blitzed in an awful performance last night against Seton Hall, and before we can move on to Villanova and begin to discuss all things 3rd Annual Casual Extravaganza, we're handing out hardware to those most deserving. Away we go...

The Chris Wright Heart of a Champion Award:
Umm...uh...Greg Whittington? New Greg 'led' the Hoyas with 9 points in what was just a horrific showing by all involved. The real winner of this award should be Seton Hall's Jordan Theodore, who willed the Hall to victory and perhaps the NCAA Tournament with an incredible 29 point outburst on 8-11 shooting from the floor and a whopping 5-5 from three. No one was beating Jordan Theodore last night. No one.

Sexy and They Know It Award:
A group of about half a dozen Seton Hall students were dressed in speedos and 'wiggled' their man-parts behind the basket whenever the Hoyas attempted free throws. Georgetown finished 12-15 from the line on the night, proving once again the old adage that Seton Hall students try hard but ultimately fail at everything.

And We Complain About Our Homecourt Award:
Seton Hall. Their homecourt "advantage" was legitimately depressing. I'd say there were maybe 7,000 people in the gym last night and the place got loud only after Jordan Theodore's 18th three pointer. For a team that was playing its biggest game of the season, it was shocking to see that little support. Special shoutout to the guy sitting next to me who continually screamed "Stop smoking crack" at Herb Pope. That was interesting.

I Want My Money Back Award:
Georgetown. I work too hard on this blog and spend too much time obsessing over this team for them to treat me with that performance. In addition, I took the damn PATH train all the way out to Newark, paid for tickets, got crappy chicken fingers and subsequent heartburn, and left with 5 minutes to go. Are you kidding me with that performance? Jordan Theodore? That guy? Him? I spent money to watch the #8 ranked team in the country get torched by him?

Round Mound Of Fatbound Award:
Herb Pope. He was so doughy in person and it legitimately infuriates me that Henry Sims played so poorly that I now have no choice to believe that Pope is a superior basketball player. I'd like to see an eating competition between Herb, Josh Smith from UCLA, and Renardo Sidney from Mississippi State. In fact, if that could be on TV during Georgetown's first round NCAA game, that'd be ideal.

Do That All The Time Award:
Jabril Trawick. It is clear that Trawick can get to the basket basically any time he wants. Unfortunately, whenever the game is in reach or the shot clock is above 5 seconds, Trawick seems too passive and focused on playing within the offense to do so. Everything about the Princeton offense would be better if we could have more guards create off the dribble.

More Picks For Hollis Thompson Please Award:
Hollis Thompson. It is no secret that Hollywood needs more shots. He has a lightning quick release, he just needs to be placed in spots so that he can trigger it. During the UConn game earlier this month, we saw Hollis running off screens a la mid-2000s Richard Hamilton. We need to draw up more plays like that, because running the offense through a turnover-prone big man who can't finish is starting to get on my nerves.

Get Better ASAP Award:
Georgetown's big men. Sims looked like he was a sophomore again last night. Lubick looked like an 11-year-old recreational player who had a few too many Jolly Ranchers before the game. Mikael Hopkins looked disinterested and clumsy. If this team is going to make any noise in March, one of our three big men will have to be significantly better than they were last night.

GUSA Curse Award:
Please tel me that Markel Starks' 1-9 shooting performance and complete inability on defense to guard Jordan Theodore had nothing to do with his campaign to become the next VP of GUSA. Please. If Starks goes into the tank much like Sims did last year after his ridiculous campaign, then Georgetown will have to take action going forward, and the clear solution is to ban GUSA forever.

Imitation is the Sincerest Form of Flattery Award:
What's the deal with our Big East rivals wearing gray uniforms these days? First UConn, then WVU, then Syracuse, then Providence last week and Seton Hall last night? GET YOUR OWN COLORS YOU GIMPS!

Georgetown Should Petition the Coaches and AP Polls to Never Rank Hoyas in the Top 10 Ever Again:
The Georgetown Hoyas. I'm too lazy to go back and check the team's record in games coming off a top 10 ranking in the polls, but I would guess that it's way below .500. In hindsight, having the team spend three days in New Jersey waiting for this game while marinating in the win over Providence and a top 8 ranking was just not a good thing.

Document Your Mardi Gras Award:
Seton Hall may be able to beat Georgetown, but they can't ruin Mardi Gras! 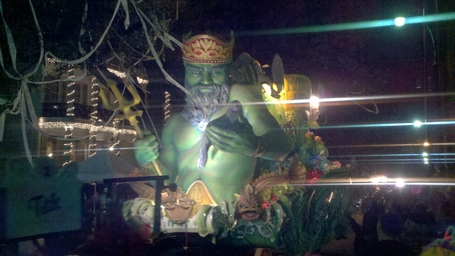 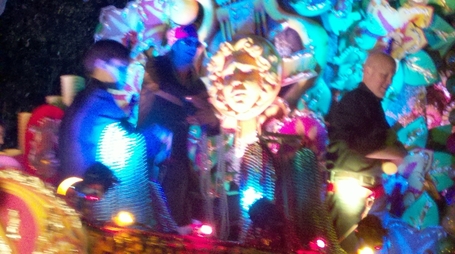 Is that Brett Michaels and New Orleans Mayor Mitch Landrieu? Why yes! 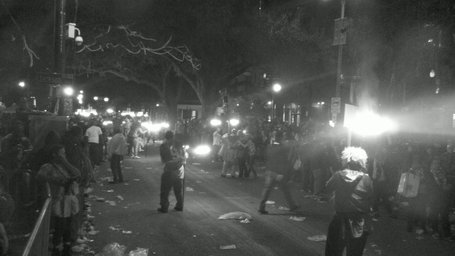 Black and white makes everything so damn artistic 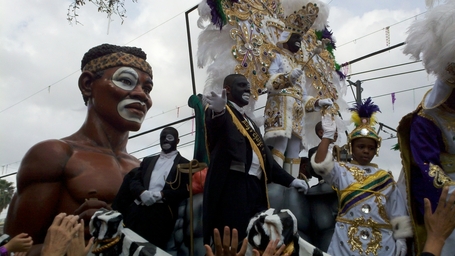 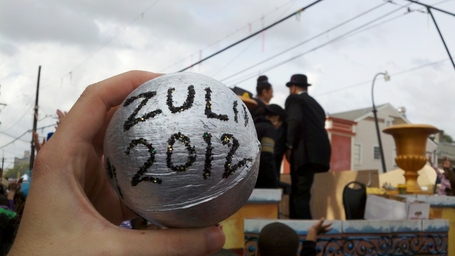 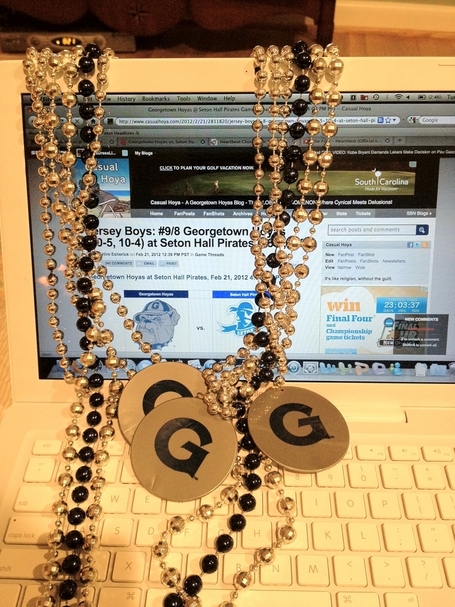 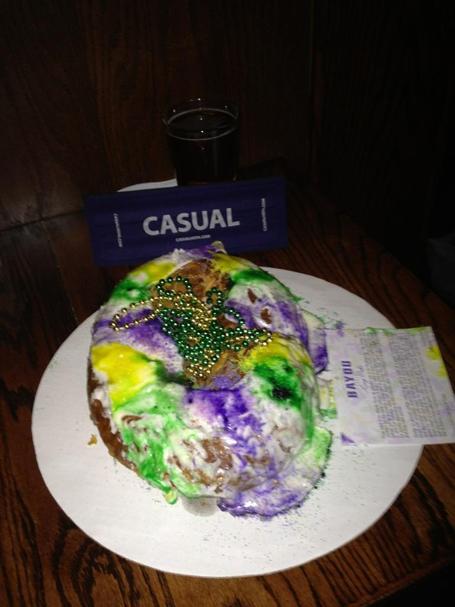 Pink Floyd Award:
Has Otto Porter hit the freshman wall? Yes, he was gored in the thigh against Providence and finished with just 4 points and 2 rebounds in that game, but Porter hasn't quite looked like his old Jeff Green self lately. 8 points and 6 boards against the Hall weren't terrible, but his outside shot seems to be struggling and I wonder if he's lost a bit of confidence in it as a result.

Sky Isn't Falling Award:
Georgetown's Defense. The Hoyas' normally smothering defense alternates zone looks with switching man-to-man. These alignments have been effective but are vulnerable to good ball movement. Sometimes, the Hoyas get burned, usually by an offense that's clearly clicking, like Pitt (52% FG, 20 assists on 25 made field goals) and Seton Hall (61% FG, 18 on 25). Most offenses aren't so selfless. Most offenses also don't have a point guard wielding a flaming ball straight out of NBA Jam. Speaking of which...

Shoe's On the Other Foot Award.
Aaron Bowen. Over the past two seasons, we've seen several blowouts punctuated by Bowen dunks. But usually those blowouts are being won by, you know, the Hoyas. So this is what is sounds like when doves cry.

Why Bother Getting Off the Bus Award:
Nate Lubick. Coming off arguably his best game as a Hoya against the Friars, Lubick committed 2 fouls in just over a minute after the opening tip, limiting him to just 9 minutes the entire night and finished with zero points on zero field goal attempts and and just 3 rebounds.

Watching game online while in class at GW

I want to jump up, rip open my shirt revealing the JT3 shirt underneath ala Superman, yell "Hoya Saxa", and run out.

Delusional prediction: Otto scores 26 and we roll by 20

Which one of these Seton Hall players

This game has gone from suck to blow.

Why do we allow our players to run for student office? Markel has been AWFUL.

It’s gonna be difficult to claw back when the other team shoots 100%, even with a hand in their faces

a loss will hopefully drop us out of top 10 in time for ND and marquette!

Villanova The 3rd Annual Casual Extravaganza is NeXt.