Happy President's Day everybody! As your Georgetown Hoyas are currently in the great state of New Jersey getting ready for the game against Seton Hall tomorrow, we're taking a look back at the big win against Providence at The Dunkin' Donuts Center on Saturday night and handing out some hardware to those most deserving. Away we go... 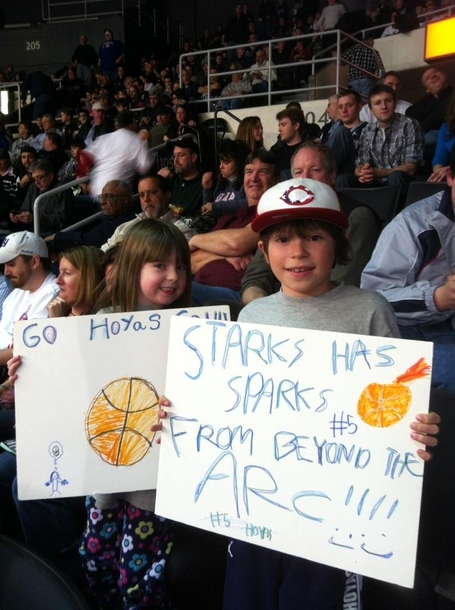 Chris Wright Heart of a Champion Award:
Hollis Thompson. Hollis reluctantly earns the nod with a 13 point and 10 rebound performance, including that three at the halftime buzzer that plunged a dagger into Providence's cold heart. Nate Lubick was on pace to win this award early on but foul trouble prevented him from swishing a few more threes and delivering earth-shattering THUNDERSNOWS in his homecoming to the New England area.

Textbook Award:
On the plays that led to the Hoyas 21 field goals on 16 assists in isolation, nearly every basket was the result of textbook Princeton hard cuts and crisp passes. But sandwiched between each highlight play seemed to be prolonged stretches of sloppy basketball that are a not so gentle-reminder that our offense can keep inferior teams in the game. And it just so happens that these types of inferior teams appear in the first round of the NCAA Tournament.

Side Effects That An Aggressive and Confident Nate Lubick May Include Award:
Picking up your fourth fouls with 16 minutes left in the game. The great irony of Nate's game is that the tenacious style of play that makes us actually happy to see him on the court often limits the amount of time he can play due to foul trouble.

Scream Award:
Is Providence serious with this thing? Nothing like scaring away all of your young fans because your mascot looks like something that should be wielding a knife in an original film that they can make five sequels to. 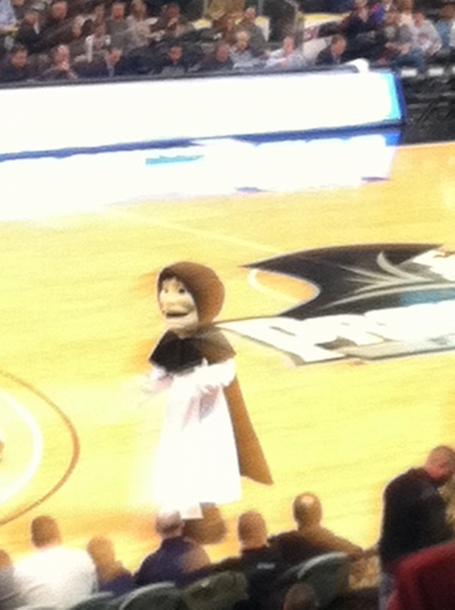 There May Be Room for Another Greg in the League Award:
Greg Whittington. Watching the 6'8" two guard glide in from the wing to an easy and-1 then erase a seemingly wide-open three on the next defensive possession showed a glimpse of the type of player Greg could be for the Hoyas in the next few years.

My Kind of Town Award:
City of Providence. 2.5 hour drive, $10 to park at The Dunk, 10 minute walk to the Providence Oyster Bar. The bar specials were $1 Oysters, Shrimp and Littlenecks and one could relax with a Stella for $5. All of this made for a pretty relaxing Saturday afternoon.

The Wait, Did You Know That Jeremy Lin Went to Harvard and is Asian Award:
Jeremy Lin.

Flattery Will Get You Nowhere Award:
Providence College. This 'let's all wear gray at home' trend is severely annoying. No one wants to work that hard to determine if you are cheering for the right team after a nice afternoon at the Providence Oyster Bar. Fortunately, there wasn't a lot of cheering for offense in the beginning of the game. This gave GU fans everywhere a chance to adjust at a reasonable pace.

Document Your Cold Relief Award:
Nothing like a case of the sniffles to keep you under the covers for the big Providence game, but this is how I've attacked mine at work all week. The diaper dandy in the documentation below is that blue box of Kleenex Cool Touch, in which every tissue is cool to the touch and very soothing. Gamechanger. 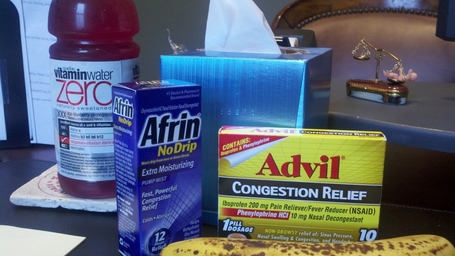 South Florida Bulls Memorial You'll Shoot Your Eye Out Award:
The Providence Friars. Providence has proven that it can't hit the broad side of a Dunkin Donuts against the Hoyas, shooting south of 26 percent in both games against Georgetown. Thank you, Providence, for making our defense look terrific. While it appears that our defense may be really good generally, it helps when the Friars shoot like the a guy pulled out of the stands to take a half-court shot for a new car.

Lord Voldemort Award:
Hoya free throw shooting. 14 of 23 is bad, but actually understates Georgetown's lousy free throw shooting, as the Hoyas missed three front ends of one-and-ones, which really should count as two misses apiece. Most of us are resigned to the occasional offensive droughts that have been this team's principal shortcoming, but missed free throws have already cost this team (Whittington's miss at Syracuse, though the Hoyas generally shot well that night) and may do so again.

Otto Porter Award for Filling the Boxscore:
Henry Sims. 10 points, 7 rebounds, 5 assists, 2 blocks and a steal for the big fella, who continues to impress.

Speaking of Otto Porter, Where the Hell was That Guy Award:
Otto Porter. A very quiet 4 points, 2 rebounds and 3 fouls for the freshman sensation against the Friars, though I suppose it's a great sign for this team that they can win a Big East road game with minimal contribution from Porter and the rest of the freshman quartet.

Mardi Gras season down in New Orleans, and here is some documentation of Will Ferrell as this year's King of the Krewe of Bacchus as well as the world famous Bacchagator float. 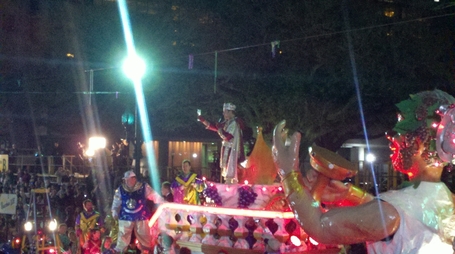 Tastes so good on the lips. 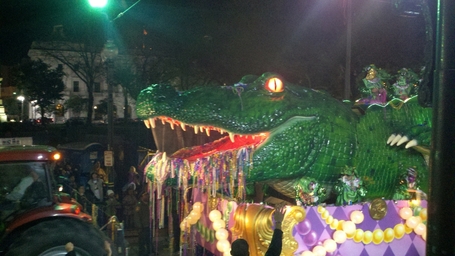 Islamic Republic of Iran Award for a Display of Aggression as a Cover for Desperation Award:
Kevin Anderson, Maryland Athletic Director. Publicly announcing a boycott of match-ups with Georgetown until the men's basketball teams meet was a super savvy PR move, especially given that there is no real local clamor for such a series, everyone who cares about these things understands the disadvantage to Georgetown of playing a home-and-home, and Maryland is obviously motivated, like so many Dalonte Hill recruits, by much-needed cash. What's next, an embargo on the Potomac?

On A Related Note, Maryland Can Eat a Bag of Dicks Award:
Maryland.

Possibly The Best Big East Arena Not Named MSG Award:
The Dunk. Casual downtown location walking distance from Federal Hill bar and restaurant upside, full beer and cocktail concessions, manageable size and MSG-esque lighting combines to make The Dunk a tremendous game experience. If only we could imploden the 400-section at Verizon and Ted Leonsis would follow through on his thinking to fix the lighting and Georgetown could have an equally awesome home court. Until then: we won't be missing the Saturday morning Southwest flights from BWI on game days for a relaxing trip to the Ocean State.

Concessions Catastrophe Award:
Jahidilikespie being refused a second half beer because he couldn't find his ID.

While I wasn't out and about dominating the Earth and rescuing cats from trees, I killed a couple of hours this weekend watching the documentary "Catfish" that came out last year. Highly recommend this interesting look at the dangers of social media. Honorable mention: my 150th viewing of Wayne's World was just as rewarding as the 1st. 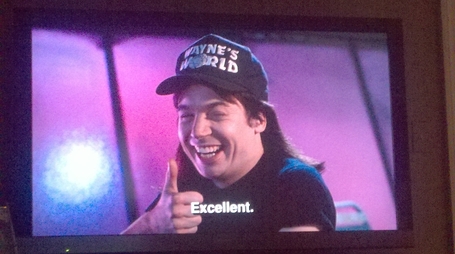 The Brother Mouzone Award:
Ed Cooley. The Providence coach and his staff went all blue bow-tie against the Hoyas in support of prostate cancer awareness, a way more casual awareness promotion than the somewhat visually unpleasant pink everythings for breast cancer awareness. The Brother Mouzone character on The Wire was an interesting one, and I'm not quite sure I understood where he fell in the hierarchy of the streets. Was he just a hired gun from NYC that was available for hire to any crew who needed assistance? Clearly his bow-ties commanded respect.

Syracuse/Pittsburgh/West Virginia Award for Lousy Conference-mates:
DePaul and Villanova. OK, I get it that you're well below .500 in conference, and that at this point your seasons can be chalked up as disappointments. If it were within your powers, you'd have won more games, not fewer. But did you really have to get our hopes up by building HUGE first half leads on Saturday over two teams that are neck-and-neck with Georgetown in the standings (DePaul: 17 points over Louisville; Nova: 20 over Notre Dame) just to squander said leads, making it even worse by making us watch/monitor on GameCast/follow Jon Rothstein's insufferable tweets for an extra five minutes as you dragged these disasters into overtime, only to lose? You are off the Christmas card list.

Boris Diaw/Shawn Kemp Award for Weight Gain:
Mike Brey, who ditched his trademark mock turtleneck in favor of an open-collared dress shirt, thereby liberating several heretofore concealed chins. If nothing else, please consider the HD viewing audience next time before deciding tie or no tie.

Jim Nantz Award for In-Game Commentary:
Good to see Nantz getting back into the swing of things with a riveting call of the Northern Trust Open playoff yesterday, and here are a few golden nuggets from the Casual Gamethread:

LEFT IS RIGHT, UP IS DOWN

he’s always fading away and getting blocked while falling down. is it that he never initiates contact?

at this point it seems clear he just cant score like that. he is better using his speed to get by guys off the bounce or spinning around them for reverse layups. don’t mind him shooting jumpers cause he hits a few but wish he’d come another 5 feet in from where he’s shooting those now….

Does anybody else hope that Katy Perry can corrupt Tebow?

13+ minutes without a FG

is this more of an exercise in Providence’s awful offense or our stifling defense?

i hate those looooong 3's

but Clark sinks them when we need ’em

how old is the providence cheerleading squad?

I love watching the young alums pair off and start flirting at halftime.

Stricken by how badly these refs deserve my balls slowly dragged across their brows. 10 beers deep.

The announcer just called it a "Thunderdunk"!

Overheard at a bar

SEASON ON THE BRINK 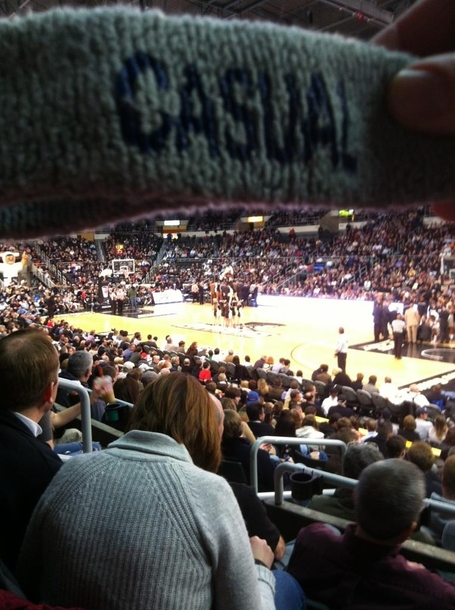