Your Georgetown Hoyas rebounded in a big way from the loss at Pitt by defeating the defending national champion UConn Huskies by a score of 58-44 last night at the Verizon Center.. We've got a quick turnaround before the ridiculously early 11am game against USF on Saturday, but before we focus on the resurgent Bulls, lets hand out some hardware to those most deserving. Away we go...

The Chris Wright Heart of a Champion Award:
Hollis Thompson. There you go, Hollis! 18 points and 9 rebounds for Thompson on the night, who was finally used effectively as a shooter coming off screens. Thompson launched 15 shots, most of which were good looks, and ran his way around the UConn defense and around screens like he was the second coming of Reggie Miller. This is the Hollis Thompson we need.

It's About Time Award:
Hoyas fans and students alike showed up in droves for what was really the first big game at Verizon this season, and it showed both in person and on television. This is the home court advantage Georgetown needs, and these are the games Georgetown needs to bring recruits to, not afternoon delights against Providence when the students are on Christmas break.

Espn3 Eats My Ass Award:
Espn3. What a useless endeavor. I have tried to watch the Hoyas from my laptop at home, my office computer, and now my iPad on a flight, and I have literally never seen an image moving across any of the three screens. I really hope NBC takes it to the worldwide leader, their technological advances have been horrific, and Grantland sucks.

Is Markel Starks Still On The Team Award:
Markel Starks. Where is that dude that scored 20 against Louisville? At some point, it will bite us in the ass not having a steady point guard, so Markel needs to get back on track. USF seems to be the perfect opportunity to do so. 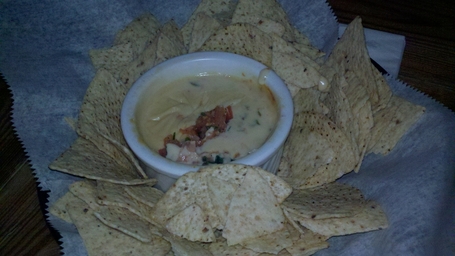 Bold Prediction Award:
UConn flames out during February and misses the NCAA Tournament, capping the worst coaching performance in Jim Calhoun's reign in $torr$. How the Huskies didn't go to Andre Drummond every single time down the floor is beyond me. Oh, now I remember...

At the end of the first half, with the Hoyas leading by 10, Calhoun followed his players off of the course. As is the custom at Georgetown games (and every college game across the country for that matter) the student section laid it on him. "You're a cheater!" chants rained down, which, even while true, Calhoun took offense to. He came up to the students standing next to the aisle and said something like "Show some respect," and then turning to Verizon staff and demanding "Get them out of here." He also may or may not have casually dropped and F-bomb somewhere in there also. Anywhere outside of the Verizon Center and this would have been ignored. However, the event staff then told any student yelling at him as he came out to stop doing so. I guess they either forgot that this isn't Hartford or that just because Calhoun is a pansy doesn't mean he has to be protected like a baby. It's college basketball and let's all take insults like men.

Hack-A-Shaq Award:
Andre Drummond's free throws. How can he be that bad at such a crucial part of the game? Kids these days with their rap music and AAU basketball! That kind of stuff would have never happened in my day.

8 Good Minutes Award:
Mikael Hopkins. In 8 minutes of action last night, Hopkins showed fans that he can be a valuable member of the bench, netting 4 points on 2-2 shooting, a rebound, a block, and a steal. Worth noting that the minutes distribution among Lubick, Porter, and Hopkins was 18, 33, and 8 respectively. Lubick is the starter, but at this point that's just a label.

Easy, Tiger Award:
Greg Whittington. Greg brings a lot to the table defensively, but he has struggled mightily on the offensive end this season. Last night Whittington was 1-6 from the floor, and nearly all 6 shots were ones that were preceded by a loud "No!" from the casual gamewatch crowd. It's good to see Greg now has the confidence to take these shots, but it would be even better if they went in.

Salvage Your Dignity Award:
The dude on the t-shirt gun at Verizon rolled out in full scrubs regalia last night for his 3 minutes of fame. Who is this guy and why hasn't he been brought before me? 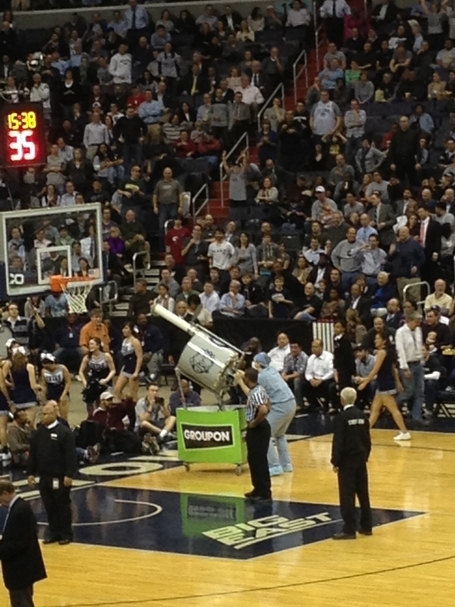 Syracuse Is A Joke Award:
Syracuse. Somehow Fab Melo spent an entire semester focused on smashing women's heads into steering wheels, neglecting to pay enough attention in "Circle or Square 101" and somehow he is back on the court after a couple weeks. Say whatever you want about Georgetown, but at least we have actual student athletes. Also, the NCAA is the most corrupt institution since John Gotti was running the mob. A couple of weeks to clear up an academics issue? What, did they need to verify the handwriting that wasn't his own on an exam?

Silence is Golden Award for How to Watch a Game Vitale is Calling:
DVR. Vitale is atrocious. But how to avoid him when he's calling a Casual Hoyas game? Easy. RELAX. DVR the game. And then at 7pm, give your infant child a bath. Read a magazine. Mix a Manhattan. Then when the game is well underway, fire up the old DVR and hit the FFWD button ONCE. You lose all the volume, and thus Vitale, but the speed isn't so fast you can't see UConn miss about 15 wide-open threes in a row. Added Bonus: Otto Porter gets subbed in faster than usual! DOUBLE Added Bonus: You can crank the fast forward up to 11 whenever Calhoun's face is on screen. 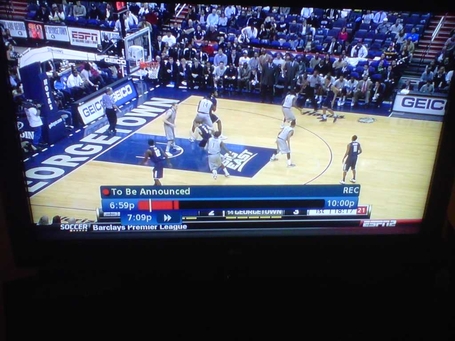 Otto Porter Award for Filling the Boxscore:
Henry Sims. 13 points, 4 rebounds, 3 assists, 2 blocks and a real casual 7 turnovers for the big man, who was again more effective in the 2nd half. In the first half it appeared that Sims was trying to shoot on a moving rim, as some of his shots from within a few feet didn't come close to drawing iron.

The Ted Leonsis Award For Hoping the Assistant to Ted Leonsis Finds This Ted Leonsis Mention During his Morning Google Search for Mentions of Ted Leonsis:
TED LEONSIS. You may remember when recently we couldn't get salt for our casual fries at Verizon and we mentioned it on the blog and at the next Georgetown game there was a DUMP TRUCK OF SALT IN THE CONCOURSE (read: one salt shaker at The Greene Turtle concession stand) because Ted Leonsis is a huge fan of the blog and a MAN WHO GETS RESULTS. OK, so let's try this again. There is something fishy about the Verizon Center. When attending in person, occasionally we see flashes in the rafters, like there are strobe lights hanging from the ceiling to provide the illusion of excitable picture-taking. Well, when we cranked up ESPN2 to watch last night's games, the flashes were even MORE PRONOUNCED. We can guarantee you the flashes by sports photographers aren't causing that. Why in the world would you need a flash somewhere as well lit as the floor at Verizon? SO FESS UP TED LEONSIS (via your assistant who is Googling you on Thursday morning): WHERE ARE THE FLASHES COMING FROM? AND WHY? TURN THEM OFF!

Tits On A Bull Award:
Verizon Wireless. After missing the first half completely, JahidiLikesPie tried to rush home to see the end of the game with a nice makers and relax. He would have liked to have known how the game was going while waiting for his train to leave Grand Central. Is it too much to ask the biggest wireless carrier in THE WORLD to slap a few towers below ground? It was noted that other assholes were happily playing stupid AngryBirds or getting their asses kicked in Words With Stupid Friends? Why do AT&T and Sprint users get to know whether they will be drinking to celebrate or drinking to forget? WORTHLESS!

Frankie Goes to Hollywood Award:
Sure, the first 15 minutes or so were a little tense as the Hoyas failed to put UConn away despite the Huskies' inability to make a damn basket, but wasn't that game overall really relaxing? Wasn't that a nice feeling? I had forgotten how nice it could be to kick back with a beer and watch Georgetown win without wanting to kick someone in the process.

The Jimmy Likes His Pasta Spicy Award:
Cayenne Pepper. You better believe we HATE IT when mom leaves for bridge night and doesn't leave $20 on the kitchen counter to order a pizza when we come up during halftime for dinner. DAMMIT MOM! Well, consider us the Jabril Trawick of CLUTCH DINNERS. All you need is a little bit of spices to turn a regular old bowl of spaghetti into GAMETIME UPSIDE. Just check out that spice documentation: Italian seasoning along with CRUSHED RED PEPPER AND CAYENNE PEPPER! BOOM GOES THE DYNAMITE! (Also acceptable exhortation: PLEASE HAMMER, DON'T HURT 'EM!) Douse your pasta in olive and that round up of spices, along with salt and pepper (WHAT A MAN!) and you won't care if mom is sleeping off a Chianti hangover tomorrow and won't make waffles. 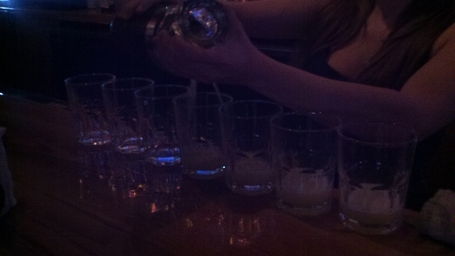 Jason Clark wins it after just 5 minutes of play, this guy looks like he’s gonna have one of those nights

How much closer to starting can otto get?

ok so i've been watching for 5 minutes

and i am already being driven insane by dick vitale’s voice. he is so annoying. do people like listening to him? do fans say "yeah espn, give me more dick!" i’m pretty sure they don’t. so im confused why he’s still allowed to "call" games

No sound here at the bar

Is Dicksmack Doug Gottlieb hating on us?

is figuring out the offense. The more we can play him, the better for our team and defense!

the future is damn good looking

Is it too early to book tickets to New Orleans?

Gratuitous Pic of Olivia Wilde on a Hammock Award:
Indeed.

South Florida is NeXt.