Now that some time has passed to let the wounds heal after the overtime thriller at Syracuse, we're ready to move forward to Georgetown's next opponent, the St. John's Red Storm. Special thanks to our jovial Johnnies friend Rumble in the Garden, who is back for another round of Casual Q&A and share everything he knows about all things Stormy. Since the Hoyas throttled St. John's at the Garden in January, this round's on us. 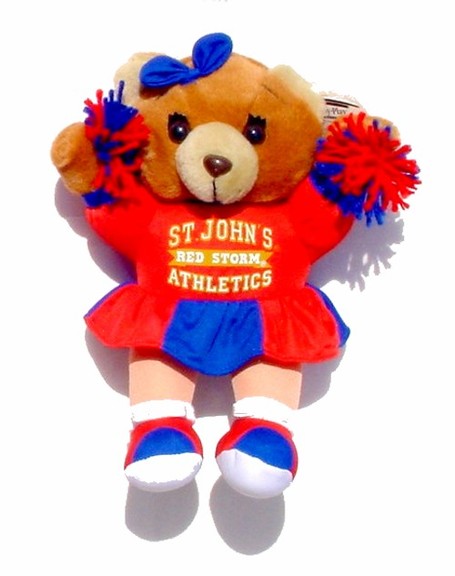 What's changed since we've last seen one another?

Maurice Harkless a/k/a Moe a/k/a So Harkless has had a trio of big scoring games. D`Angelo Harrison is stroking it from outside. Phil Greene is looking more confident as a scoring point/ combo guard type. Outside of that, not much has changed... except the loss of another player, because that's how it rolls this season. The veteran guard, Malik Stith, decided to leave the team for reasons that seem unclear. He wasn't, you know, that effective - see his multi-zero stat lines - but a 6 man squad has to hold back for fear of wheezing and coughing their way up the court in the second half. Also: the Johnnies tasted hope against Duke and West Virginia, but were fed a heaping of SIT DOWN, YOUNG'IN from Syracuse and Cincinnati.

The season seems long and there's not enough gin. Or things to mix gin with.

More fun with Johnnies after The Jump:

What are the chances that Moe Harkless is back in school next year?

Moe Harkless has a lot of talent. Dick Vitale yells his name. CBS Sports has him as one of the top freshmen.

And still? I give his chances at about 80-90%. Anthony Randolph got drafted off of a lackluster performance his freshman year, so I maybe there's a team that could guarantee him a late-20s spot. But Harkless' overall performance needs work. His 3-point shooting needs to improve, his ability to score in bunches needs to improve, and he needs more strength. And unlike Randolph, Harkless is 6'8" - small forward size, not center-sized. In a draft with so many players on elite teams who stayed, I can see him doing better next year (FWIW, NBA Draft.net has him going 9th in 2013).

How is Steve Lavin doing? I assume he is done for the year?

Lavin is doing well - making it to some practices and doing some recruiting, and watching the games from a vantage point high above Madison Square. But it doesn't look like we'll be able to fire up the Lavin Lines page this season with Steve Lavin's erudite analogies and that makes us sad.

This year seems to be a lost cause in terms of getting an NCAA Tournament berth. What are you hoping to see from the squad for the rest of the year?

Development. The whole team needs to improve a lot. I don't think we'll see a much better defense - the framework for the D is based on pressure, and it's hard to apply pressure without being able to rebound or defend with size, or without bodies to rotate in to play fearless defense. So it's the little things - I want to see Amir Garrett and Sir`Dominic Pointer develop offense of some kind. I want to see consistency from Phil Greene. And Harkless. And shot selection from D`Angelo Harrison. More energy from God`sgift Achiuwa.

How is next year looking? Assume Harkless comes back for now.

We learned that top target at forward, Ricardo Gathers, has committed to Baylor. There's word that targets Chris Obekpa and Jakarr Sampson are leaning towards Providence - suddenly a hot name in recruiting. Providence? How can that happen?. (Casual Note: I have a crazy idea, and it rhymes with "honey").

So I have no idea. The team BADLY needs someone taller than a proverbial three apples high to grab rebounds, but that players has to be willing and able to run, too. The team needs another shooter (they have their eye on a JuCo from Cali named Brandon Parga, but no offer - so hard to know how serious of an eye they have).

They probably won't be as bad - it can't be that hard to find a forward for depth, maybe another guard for depth (one who can rebound, do effort things), and the team has Jamal Branch eligible in December to take on the point guard role. I think the team can challenge for an NCAA berth, assuming normal frosh-to-soph leaps for 3 of Harkless/ Garrett/ Pointer/ Greene, with D`Angelo Harrison improving slightly.

Who do you expect to be the top 4 teams in the conference when all is said and done?

Syracuse, Marquette, Georgetown, and a player to be named later. I'd feel dirty saying Notre Dame - they're not good. So Louisville, I suppose?

Of the teams competing for a top 4 spot, who are you hoping collapses down the stretch?

I love that Mike Brey deserves a coach of the year award, but that's some real smoke and mirror [stuff] there. I'd prefer to see Syracuse collapse in the NCAAs. Much more satisfying.

If the Johnnies can't put together a miraculous run through the Big East Tournament, who are you rooting for?

Hm. Probably South Florida. I'm on a meek-shall-inherit vibe right now. The Hoyas are a close second, with Marquette third. All the other teams can suck a storm.

Who do you think will win it all in New Orleans this year? Predict the Final Four?

Too early to predict!

What has St. John's done better this year than expected? What has been worse?

Better: not foul opponents. Hit two-pointers, especially in the mid range. That might be it.

Worse than expected: Keep players on the team. Keep recruits in the fold. Rebound. Shoot from outside the arc. Their ability to force turnovers. A lot of it isn't worse than I expected given this roster, but this roster is worse than expected. I don't know if the decommits would have meant more wins at all, but St. John's struggles to control the game.

I see a beating. I see the ref coming to center court to mercy rule it. Kidding. The Johnnies will have competitive moments, get blocked a lot, show some fight late, and lose by about 20.