Sleeping with the Enemy: The Huskies of Connecticut

Share All sharing options for: Sleeping with the Enemy: The Huskies of Connecticut

The Hoyas begin a key stretch of the season tonight with a showdown against the defending National Champion UConn Huskies at the Verizon Center, and as usual we here at THE GLOBAL PHENOMENON are bringing you everything you've ever wanted to know about Georgetown's next opponent. Special thanks to our homeslices at The UConn Blog, the best damned spot for all things UConn on the internet. Gentlemen, this Heineken is for you. 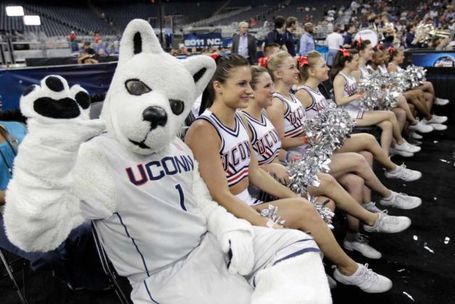 When the season started, I told anyone who cared to listen to me that there were five absurdly talented teams, and then a bunch of decent teams behind them that couldn't hold a candle. Four of those five teams are about where they should be (Kentucky, Ohio State, Syracuse, and UNC), and UConn is close to falling out of the top 25. What has happened?

You sound like every UConn fan I know and we're all asking the same question. I think some part of it probably relates to inconsistency with personnel. Ryan Boatright has become a key part of the team, but he's missed nine games over two separate NCAA suspensions. Jim Calhoun got sat down for three games as well mid-year and interruptions like that can really knock a team out of rhythm.

I think the team is also still adjusting to life without Kemba Walker. On paper the team has more talent than it did last year, but it's not concentrated in the same way. Shabazz Napier, for all his good qualities, isn't the same player as Walker, and when he tries to be mistakes happen.

It's also a very young team, UConn has no seniors, has one (incredibly underperforming) junior in the form of Alex Oriakhi and then a bunch of sophomores and freshman. I've spent the whole season watching the team hoping that somehow it's all going to fit together and click, but it hasn't yet.

More fun with UConn after The Jump:

Who has been a bigger disappointment - Roscoe Smith or Alex Oriakhi?

Oriakhi. To be fair to both, they've been displaced from their natural positions (Drummond has filled a lot of Oriakhi's role, and Smith, despite being rail-skinny, is a better power forward than he is a wing), but someone of Oriakhi's size should still be able to have much more of an impact than he has. It seems mental with him too because his mistakes are all little things he should be able to fix. He can't catch the ball in the post, he misses layups, boxing out seems like a foreign concept, you get the idea. The combination of Drummond and Oriakhi on the front line should be a matchup nightmare, and UConn's inability to get things done down low is responsible for four or five of the six losses.

If you had something to say to the NCAA regarding the recent shitshow surrounding Ryan Boatright, what would it be?

Nothing that could be printed in a respectable family publication like Casual Hoya. The problem isn't that Ryan Boatright was investigated -- he clearly got some impermissible benefits back in his AAU days (nothing UConn-related according to the NCAA), and I don't think anyone had an issue with his six-game suspension to start the season. But it's a joke that after clearing the kid the NCAA would take a tip from his mom's jilted ex, force UConn to sit him during another investigation of the same stuff, and then clear him in the end without further punishment. Once a player has been cleared they should be allowed to play until the NCAA actually has proof of something.

George Blaney did not particularly impress in his stint as head coach while Jim Calhoun was suspended. Do you still see him taking over when Calhoun retires? Or will it be someone else? Who would be your ideal next coach?

Nope, no way. UConn hasn't formally announced a "coach in waiting" but it sure seems like Calhoun is grooming second-year assistant Kevin Ollie for the job. He played four years at UConn before somehow scrapping his way to an 18-year NBA career. He's still new to coaching, but super popular with recruits, so if Calhoun sticks around for a few more years he should be in good position to take over.

Speaking of coaches, if you were tasked with starting a program tomorrow, which Big East coach would you choose to run it? Who would be your last choice?

I'd probably grab Jay Wright or Jamie Dixon. I know both Nova and Pitt fans have their frustrations with those two, but they're young and there is definitely talent there. JTIII probably gets a mention as my third or fourth choice, with Kevin Willard as a dark horse.

Last is easy -- Mike Brey. He does a lot with the players he gets, but I'd rather claw my eyes out than watch Notre Dame play "basketball." I'll take an inconsistent team with national title caliber talent over an overperforming squad that loses in the second round of the NCAA's any day.

Jeremy Lamb is the guy that should be getting the last shot in a close game for UConn. I assume nearly everyone in the country knows that. Do you think someone will have the heart to tell Shabazz Napier?

Almost every UConn fan reading that is nodding, but you've found the biggest Napier apologist on the internet. Napier is inconsistent as all hell, and makes dumb decision after dumb decision, but half of those dumb decisions wind up working. And he wants the ball, which is important. On the other hand Lamb often looks like he's gone to the Rudy Gay and Stanley Robinson School for Talented Wings That Like to Disappear. If I got the sense that Lamb actually wanted the ball to end a game, I'd be happy to see him take, until then I'll keep rolling the dice with Shabazz.

We're about halfway through conference play now. When the dust settles, who are the top 4 teams in the conference?

Syracuse, Georgetown, Marquette and UConn. The first three are easy, and I know that last one seems like a homer pick, but I just don't know who else I can choose, especially if UConn can get something, anything really, to work during the month of February.

Who will you be rooting harder against in two years - Pitt or Syracuse?

Tough to choose (especially because of the TV contract thing with Pitt), but probably Syracuse, because they felt more like a cornerstone team of the Big East. The thing that kills me about all that is that everyone seems to forget that Pitt and Syracuse left in direct response to something that never happened. I know their fans all talk about perceived instability, but the real fear was an expanding Pac-12 that would kill the Big XII and force the start of mega conferences. That didn't happen, and now the the Pac-12 seems comfortable, the ACC is at an awkward 14 teams and the Big East is less than a shell of what it once was for no goddamn reason.

It's your last meal in Storrs, Connecticut. Where are you going and what are you ordering?

I'll take the Aircraft Carrier from Wings Over Storrs. That's two full racks of ribs, 60 wings, six pounds of boneless wings, two large fries, two large onion rings and three bottles of soda. All you need is ten friends, $120 and a week's notice on the order if you want it for the Super Bowl. 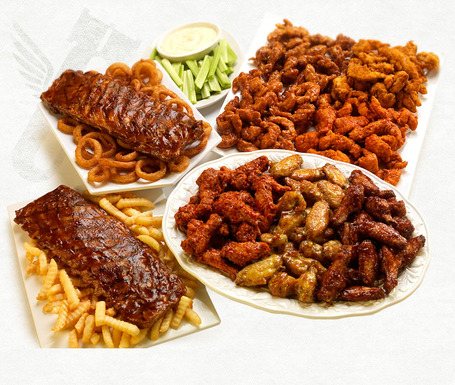 The only reason to ever go to Storrs, CT. via wingsover.com

Rate Andre Drummond on a scale of 1-10 thus far. What has he been better at than you expected? What has been disappointing?

Seven. When he's on he's unstoppable, but he's incredibly raw (35% from the free throw line) and he hasn't been attacking the hoop as much lately. At times he's confused himself with a jump shooter instead of a guy who is 6'11" and 270 lbs. He broke out of a mini-slump against Notre Dame (15 pts, 11 rbs, 4 blk) so hopefully he can keep that going.

Predict the future for this UConn team - do you see it going like 2010-2011 where you guys muddled through the Big East and got hot at the right time? Or is it going to be 2009-2010 all over again with a full scale collapse coming in February and an NIT berth?

I'd lean closer to 2011, because there is so much more talent there than was in 09/10. Hopefully with the suspensions and roster shakeups behind them the team will finally be able to focus and string some games together. A repeat seems like a far away dream at this point, but like you said up top, the talent is there.

The way this year is gone in the Big East I'm hesitant to make a prediction before knowing if Jim Burr is working the game or not, but I think in Boatright's second game back UConn will start to click some more. I'll take the Huskies 68-66, with the caveat that the higher scoring the game is the better it bodes for UConn. If both teams are in the 70s, I'll have a lot more confidence in UConn. If Georgetown can slow down the game and limit the number of possessions, it bodes well for the Hoyas.