Sleeping With The Enemy: The Longhorns of Texas

Under the cover with the 'Horns.

Share All sharing options for: Sleeping With The Enemy: The Longhorns of Texas

The Fighting Hoyas of Georgetown are back in business tonight, taking the stage once again on national television in the Jimmy V Classic against the Texas Longhorns. As usual we here at THE GLOBAL PHENOMENON are bringing you everything you need to know about Georgetown's next opponent, and special thanks to our friends at Burnt Orange Nation, the best source on the internets for providing the goods on all things Longhorns. Gents, this Shiner Bock is for you. Let's do this.

Austin's motto is "Keep Austin Weird." Tell me what's weird about Austin or whether this was just conjured up to give the city some allure to the hipster/silicon valley rejects.

I'm a corporate attorney, so you won't find me stoned out of my mind in a Pease Park drum circle, sharing in the groove with fellow Earth travelers who've communed at Eeyore's Birthday Party, but the fact that it's not only an option for Austin residents every April, but has been for each of the past 49 years, speaks to what people mean when they say Austin has a weird side.

As for the slogan itself, there are a couple of interesting things about "Keep Austin Weird" that I'll share with you. First, because I know that you Casualistas are nothing if not proud provocateurs, y'all will appreciate this: notwithstanding that the slogan's Austin origins are well-established and generally undisputed, it turns out that there's a sizable cult of people from Portland who obsessively claim that "Keep Portland Weird" was the original and Austin's a derivative. These particular Portlanders really, really want you to acknowledge that Portland is the one and true City of Weirdos, and grow highly agitated if you start gushing about Austin as the zenith of zany. Try it sometime, and enjoy the highly entertaining meltdown.

Second, "Keep Austin Weird" in fact owes its origins to the Austin Independent Business Alliance, which adopted the slogan in 2000 to encourage Austin residents to help preserve the city's offbeat character by shopping at locally owned small businesses. It's been a remarkably successful and highly visible campaign in part because the slogan so perfectly captures the city's spirit. One of the most important reasons that Austin has long been such a dynamic and culturally diverse city is the hospitable climate it provides to young people, aspiring artists/musicians, and hippies in the mode of Willie Nelson. Also known as people without real jobs. 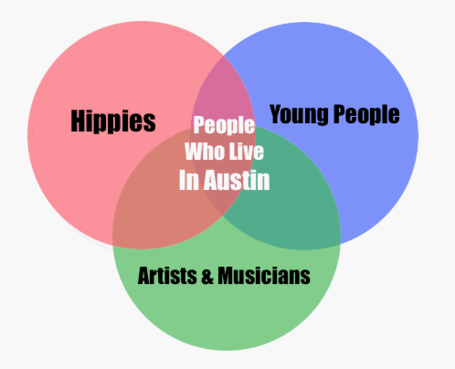 For decades Austin has been a place where you can live dirt cheap, with a local economy that supported them with a mishmash of opportunities -- some above board, many more off the official grid, and all of them very local in origin and character. The upshot, though, is that Austin has long been an incubator for creativity and entrepreneurship, and because that fact isn't lost on so many Austin-ites, even people who aren't "weird" embrace Austin as a place worth "keeping weird."

I am a top recruit and considering attending Texas. Convince me why I should go there.

Casually? Sure, why not: 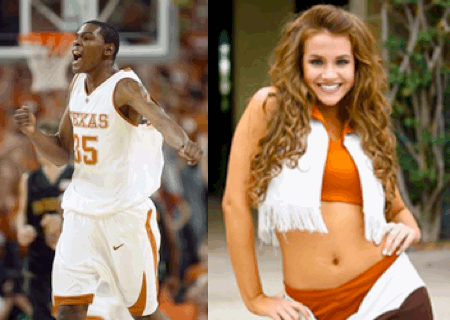 What are your thoughts on the job Rick Barnes has done? Sure, there has been the regular season success, but do you feel Texas should have had more success/deeper postseason runs given their talent over the years? This is probably a good time to remind you that Kevin Durant, DJ Augustin, Damian James and Dexter Pittman were on the same team that lost in the 2nd round in '06.

This is probably a good time for me to remind you that all those kids were true freshmen in '06 (and a 320-pound Dexter Pittman could barely play 8 minutes a game). That team started four true freshmen and a sophomore. The expectation is not a Final Four run with a team that young, no matter who's on it, and that particular group got bumped by a team that precisely highlighted why it was unrealistic to expect a Final Four out of that young group -- a huge, strong USC squad filled with grown-ass men who pushed a bunch of skinny freshmen around in the paint.

Rick Barnes is a very good basketball coach. Is he a Top 5 coach? No. Is he a Top 10-15 coach? Yeah, he is, notwithstanding his national reputation as some sort of walking failure. Barnes carries a personal streak of 17 consecutive NCAA Tournament ppearances into the 2012-13 season, a mark that is tied with Duke's Mike Krzyzewski for the longest current streak of any active D1 coach. Barnes took over a dump of a basketball program at a football school that supports the football water boys more than the basketball team, and although Texas has not advanced to the second weekend of the Tournament the last three seasons, in his 14 seasons in Austin Barnes is responsible for 5 of Texas' 13 all-time appearances in the Sweet 16, 3 of its 7 trips to the Elite Eight, and the program's lone Final Four appearance.

For context, here's Barnes compared side-by-side with your boy JT3 since he arrived at Georgetown in 2005-06:

None of this is to say you can't prefer John Thompson III to Rick Barnes. But Barnes' reputation as an underachieving flop of a coach is a joke. It really is. There aren't but a handful who have been more successful than Barnes has been over the past 15 years at Texas, and I think we're fortunate he came to Austin. He's been remarkably successful.

For the record, other than tonight I am, as you know, quite a big fan of your Hoyas. A bit after I moved up to DC after college I dated a senior at GU who was and is really awesome, and I fell in love with that group of players who came through between 2005-07, and Jeff Green to this day remains my favorite non-Texas college basketball player of all-time. I'll be rooting for y'all to do well the rest of the way.

Who are the players that Georgetown needs to be aware of tonight? Top scorers? Rebounders?

Texas' top scoring threats are a pair of sophomores: Sheldon McClellan, an athletic 6-4 wing who has taken a nice step forward this year is still figuring out how good at basketball he can be, and 6-2 shooting guard Julien Lewis, who can hit the three, has a developing mid-range game, and can turn defense into offense.

The other player I really like but whose box line may not reflect how good a player I think he can be is the 6-8 freshman wing Ioannis Papapetrou, a native of Greece who can do a little bit of everything, is very developed physically, and has both great hands and a natural shooting stroke. As far as rebounders, the team as a whole is long and rebounds well, but the two to keep an eye on are the two freshmen centers, five-star prospect Cameron Ridley and the sneaky athletic Prince Ibeh, both of whom stand at 6-11 and erase shots from the paint.

This Texas team is young, though -- the youngest, least experienced in the country, in fact, without a single upperclassmen and true freshmen playing 60% of the team's available minutes this year. With so many true freshmen, it's hard to know who might play well, and who might disappear.

What the hell is going on with Myck Kabongo?

Good question. The NCAA won't let us know, so he's suspended in limbo, while he awaits the NCAA to clear him for a a trip he took this past summer to visit his friend and former Longhorn teammate Tristan Thompson. Fortunately for the Hoyas, it appears he won't hear anything for one more week, so Merry Christmas, you get to face the youngest team in the nation, with a true freshman point guard instead of a returning sophomore.

If I have one night in Austin, where am I eating and where am I partying?

For dinner, I'd ask you to choose your priority: atmosphere, barbecue, or the best restaurant in Austin. If it's atmosphere you wanted, I'd let you choose between Fonda San Miguel (interior Mexican) or the Oasis (spectacular outdoor deck overlooking Lake Travis). If you wanted barbecue, we'd do Franklin Barbecue (pretending that it's not open from 11 AM until the brisket runs out around noon-thirty). And if you just said to take you to the best restaurant in the city, I'd insist we go to Uchiko.

As for where to party, Austin literally now has an overwhelming number of options, so whatever it is you want, we could find it. If it were up to me, we'd go to catch a great show at a venue like Stubb's or the Mohawk, followed by some late night bar hopping where the drinks dictate the direction we take next. Hopefully not to E 6th Street.

Where do you see Texas finishing in the Big 12 this season?

I haven't studied the rest of the conference as closely as I will in the coming month, but right now Texas looks like the 4th or 5th best team in what will again be one of the nation's strongest conferences. Measuring by KenPom ratings, the Big 12 has been the best top-to-bottom conference in the country over the last five seasons, and currently rates third, with Kansas, Baylor, Kansas State, Oklahoma State, Iowa State, and West Virginia all rating as KenPom Top 60 teams, with Oklahoma not far behind, and two poor teams in Texas Tech and TCU.

It's a little early to project Texas' place in the pecking order, in large part because Kabongo hasn't played yet, but also because Texas will get tested for real over its next five games: tonight vs Georgetown, followed by UCLA in Houston, a breather at home against Texas State, and then UNC at home and Michigan State on the road. We'll see how the team is looking at the end of that stretch.

Speaking of the Big 12, can you give us a brief rundown of this Longhorns Network and the powers that it has bestowed upon you? How does Georgetown go about getting something similar? Assuming we can't, can you lend us some money?

We definitely don't want to hog this all for ourselves and would be happy to lend you money at Prime plus 12 rates, or invite you to come play a home game at our place where the toilet paper is made of gold-crusted hundred dollar bills.

Who do you see this game playing out? Final score prediction?

Well, I flew out to Maui with the team and watched us get run out of the gym by Chaminade, so I'm not exactly banking on this young team strutting into Madison Square Garden and burying Georgetown with great basketball. I hope that we play defense and rebound well, and we definitely need to connect on a couple of threes in the early going to help extend the zone, but I could see us struggling through a brutal scoring drought at some point, at which point we'll have to hope that our defense (rated 2nd nationally in Adjusted Efficiency as of now) can get y'all to play in another football game like you did with the other UT.

Don't give up, don't ever give up.

This "Hook 'Em" sign y'all use - do you also use this when you see your buddies at a bar or something as like a high-five or half-hug type greeting thing?

I can tell from the way that you ask that you know the answer to this question. The hook 'em hand gesture is a universal sign for success and awesomeness. Win the big game? Hook 'em. Score with the gorgeous girl? Hook 'em. Avoid a round of layoffs at your company? Hook 'em. There are no limits to its utility except the extent to which you and your life are awesome.