Share All sharing options for: Film Room: Is Georgetown's Offense Better With Nate Lubick At Center?

A lot has been made of Mikael Hopkins' role in the Georgetown offense this year. In the past week his time on the floor and impact was lessened by both foul trouble and how aggressive he was. It seemed to me that someone may have had a talk with him about picking his spots - and it being okay to defer when he has the ball. Not that it was a direct result of it, but in these last two games Georgetown did have their two best offensive performances since they played Indiana.

In fairness to Mikael, the only other centers that JTIII has had have either been; a) 1st Round NBA Draft picks or b) Seniors. To see how Mikael stacks up so far against senior year Roy Hibbert, Henry Sims and Julian Vaughn and sophomore year Greg Monroe: 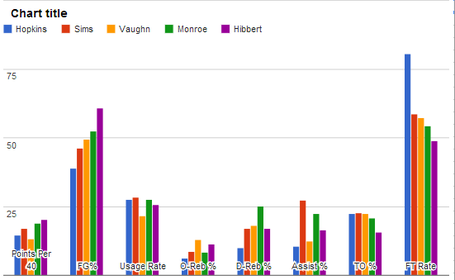 Mikael is an adequate scorer at this point in his career. His back to the basket leaves something to be desired but it's decent for a sophomore, he just struggles to finish which is reflected in his 38% shooting. Helping matters so far is his ability to get fouled and get to the line as his FT Rate is by far the highest out of the group.

Mikael's criticism thus far comes from the amount that the ball is in his hands as a decision maker. Julian Vaughn's assist % was the lowest of the bunch before Mikael, but Julian also had by far the lowest usage rate. Right now Mikael is the play maker out of the high post Julian was (not much) but also is trying to make plays at the rate of Henry Sims and Greg Monroe. It'd help if the rebounding numbers went up as well, but with Greg Whittington crashing the boards this year along with Otto Porter and Nate Lubick - it's not a dire need. The concern going forward has to be how much he forces the issue. If he can defer at pick his spots with the one on one coverage that he'll be the benefit of, he can put together a solid season. We saw more of that the past two games, it also helps the Hoyas that there is capable replacement if Mikael falters. It's not Moses Ayegba (yet), but rather Nate Lubick. 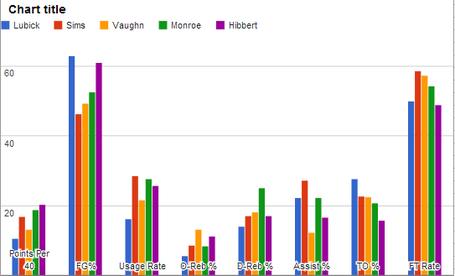 It's difficult to interpret these numbers because Nate still does spend most of his time at the 4 spot. However he has shifted over to the 5 at times and there has to be at least some thought of Nate being capable of running the offense. If you play Nate at the 5 as the hub of the offense, it is likely that we see more assists coming out of the high post. If the 5 spot is going to turn the ball over, some thinking has to be given to at least having a playmaker be the culprit. Do you lose rebounding by moving everyone up a spot? Maybe, but I don't think it's asking for much trouble (to note, Jabril Trawick has a higher def reb % than Mikael). Where it would most likely put this group at a disadvantage is the use of zone defense which Georgetown is playing at a high level again this year. You essentially move Greg to the back line and insert Jabril to the top of the zone at the SG spot.

Also, here are the chart numbers with an inclusion of 2005 Jeff Green when he played a lot of '5′:

So, there is something to go off of with the Starks/Trawick/Whittington/Porter/Lubick group : The 2005 and even the 2006 team. The most often used lineup with that 2005 group was: Wallace/Cook/Owens/Bowman/Green. Rayshawn Reed actually played slightly more minutes than Roy Hibbert. Only a 7 man rotation with the Top 5 all averaging 25 or more minutes with a natural college PF taking on more of a center role. Defensively that team only allowed 41.5% shooting, in the end it was a team that couldn't score easy baskets and played at the slowest pace of all JTIII teams as the offense was being put into place. Had they found easier offense, it was a team that likely wouldn't have collapsed down the stretch and made an (astonishing) NCAA appearance.

None of this is to say Mikael needs to hit the bench or playing Nate at the 5 is a viable option long term. The Big East isn't small. Between Syracuse's front court and Cooley, Dieng, Teague, Adams and Gardner/Otule - there are a lot players Mikael will have to be on the floor to go against. But, there is another option that doesn't rely on Moses or BJ Hayes taking on a role they aren't quite ready for.

A case certainly can be made that Jabril is one of the 5 best players on this team and I'll have to wait until Hoya Prospectus runs their lineup stats this season but I'm interested to see where the Starks/Trawick/Whittington/Porter/Lubick group falls in. Otto at the 4 also seemed to net the best offensive production last year- it allows him to hit the offensive boards more aggressively, something this team really is lacking and makes him a greater threat in the mid range - where he excels.

My points in all of this:

I'm cherry picking the first example I saw, but here's an example of the spacing with a Nate/Mikael combo vs Nate playing the 5..

Mikael sets a high ball screen and while Nate doesn't flare out as quickly as he should - the defense doesn't respect him at that spot on the floor, a driving lane is quickly shut off for Markel and from there the offense had to re-start: 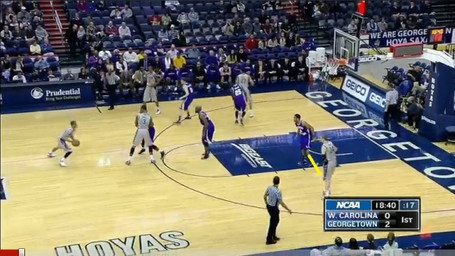 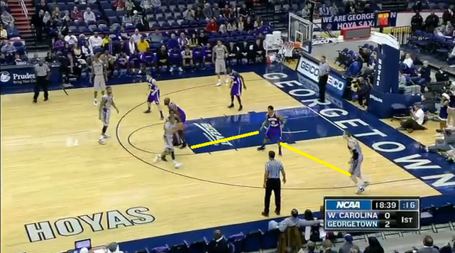 Here is the same thing, a high ball screen and again no action off of it due to Nate's defender being allowed to help off: 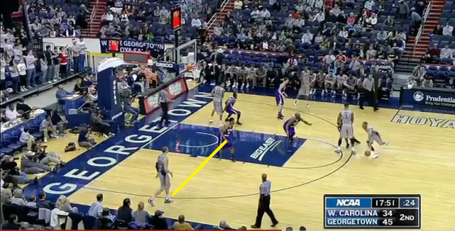 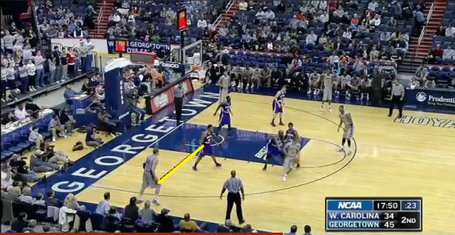 Now, here is an example I found of the Markel/Jabril/Greg/Otto/Nate grouping with Nate setting a high ball screen for Greg, which he rejects due to an opening: 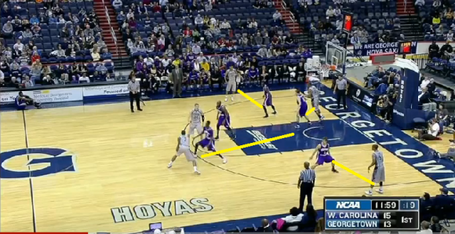 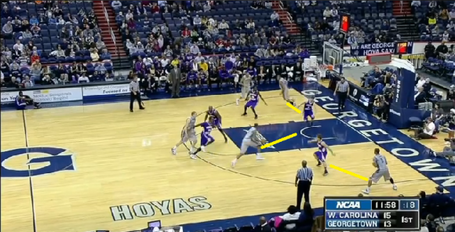 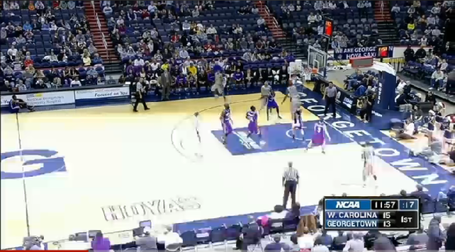 Everyone had to be accounted for - Jabril, Markel and Otto. The Western Carolina defender did a poor job of showing too early but he likely thought that he had help behind him if Greg rejected the screen. Greg did so due to having an open lane with his teammates pulling the defense away. The result was a missed dunk but an open look at an easy basket.

Teams from Michigan to the Knicks and the Miami Heat have found success lately playing a multi-dimensional 4 man and stretching the floor with skill. It's too much of Nate Lubick to ask for him to play the 5 spot on defense for extended periods, but I think this lineup can help give a boost to the Georgetown offense this season in stretches.

(Casual Note: You can find this post and more at Cutting Down Nets)