Sleeping With The Enemy: The Catamounts Of Western Carolina

Under the covers with the Catamounts.

Share All sharing options for: Sleeping With The Enemy: The Catamounts Of Western Carolina

As difficult as it is to focus on actual basketball right now with OUR FUTURE HANGING IN THE BALANCE, we've got a game to play tomorrow. Our Fighting Hoyas of Georgetown host the Catamounts of Western Carolina in the Verizon Center at noon, and as usual we here at THE GLOBAL PHENOMENON are bringing you everything you need to know about our next opponent. Special thanks once again to Mr. Steve Behr, the Sports Editor of the Watauga Democrat for providing answers to our hard-hitting questions. Steve, this bud's for you. Let's get 'er done.

Tell us something about Western Carolina that we don't know.

Well, let's start with location. Western Carolina is located in a very small town called Cullowhee (Appalachian State fans call it Dullowhee), North Carolina. It's in the Smoky Mountains and located about 35 minutes from Harrah's Cherokee that is located on the Cherokee reservation. Basically. Cullowhee is the university and a couple of streets for student housing. The closest town is called Sylva, which is the proud owner of a Walmart, a Sonic and a good pizza joint whose name escapes me, but they do have a good bacon and pineapple pizza. It is also about an hour from Asheville, which is a really cool city set in the mountains. A great place for folks to visit in the summer where the temps are about 10 degrees cooler than the in the Charlotte area, which is about 2 hours away.

What is a Catamount? 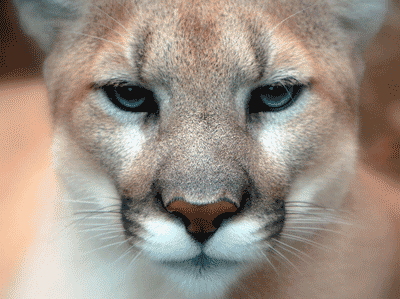 Hello, everyone. I am a catamount. via jsoundblog.files.wordpress.com

Glad you asked. A Catamount is more or less a Bobcat or any wild cat that is located in the Appalachian Mountain Range. It's a unique mascot since only Vermont shares the handle, or at least I'm told that. Western's chief rival, Appalachian State, plays the Catamounts for the Old Mountain Jug in football every year. ASU won the football game, but Western won the first basketball game this year 70-64.

Western Carolina has one player, Kevin Martin, who is in the NBA. He was drafted by the Sacramento Kings in 2004 and currently plays with the Oklahoma City Thunder. I'm guessing your readers already know that.

Where do you see the Cats finishing this year?

Western Carolina has steadily improved in the Southern Conference North. They played their way to the finals of the SoCon Tournament last year before falling 93-91 in two overtimes to heavily favored Davidson in the finals. I see Western Carolina finishing either first or second in the North Division and quite possibly winning the tournament if the ball bounces right.

In our last chat, you acknowledged that you were a Springsteen fan. Where do you stand in the Springsteen vs. Billy Joel argument. If you had a choice, whose concert would you go to if they were both playing on the same night.?

I'd choose Bill Joel. I really started listening to his stuff in the early 80s when I bought The Stranger and Glass Houses. An Innocent Man was released just before I went to college, and I almost wore the grooves out of the record in the next five years. Favorite song overall, at least this week, is Scenes from an Italian Restaurant. Leningrad is also a classic for me and I've Karaoke sang "We Didn't Start the Fire." Loved Bruuuuuuce and Billy on the 12-12-12 concert, by the way. Joel really tore it up in my view.

You walk into a BBQ joint in North Carolina (or Western, as it were). What are you ordering in order to put together your best BBQ meal?

I've never had BBQ in Cullowhee or Sylva, so I can't tell you what they've got. My order to any BBQ includes a beef sandwich swimming in a tangy Memphis sauce, baked beans that have a hint of spice to them, but not overpowering, a plate of corn fritters fried to perfection and banana cream pudding for desert. If the chef has something that I gotta try, then I'll take his (or her) recommendation. Just don't forget the pudding.

Once you have gathered your thoughts about the below, what can you share about WCU's free throw defense that makes it so tough?

For starters, full disclosure: I cover Appalachian State full time, but did not see the shot since I was busy at the office and could not get to Cullowhee in time for tip-off. The player involved, Brian Okam, is 7-feet tall and has arms long enough he could fly from Boone to Cullowhee instead of taking a bus. Maybe he should do what Wilt Chamberlain allegedly (I've never seen film of it) did and dunk his foul shots.

Seriously though, It looks bad I know, but it was one of those cases where the ball just slipped out of his hands. I've spoken to his roommate and the guy who caught the foul shot and they said the ball just slipped. He should have just started over since one of his teammates said the ball was slipping as he was about to release it. He made the first foul shot of the two he took.

The second one slipped out of his hands, plain and simple. It happened to that Kansas kid (Brady Morningstar?) and I've seen it happen to NFL quarterbacks, running backs and major league pitchers. It happens and frankly I'm surprised at the national reaction to it. Since then the requests for interviews have flooded the Appalachian State sports information office, including Good Morning America. I was taken aback by all of the attention. It was kind of funny the first time I saw it, but I got over it after the second or third viewing. Maybe I'm an old square, but to me, it's just not THAT big of a deal.

Okam is trying to see the lighter side of it, but it's not always easy when 13 million people (the youtube hits on one of the posts alone) are laughing at you. Okam had a final exam Thursday night, so I could not speak to him. His roommate and his teammates have seen and heard enough about it. The ball slipped. They feel it's not that big of a concept to grasp. They also know it can happen to anybody. The high school football team had a similar situation when a slotback went in motion by doing back handsprings to distract the defense. It also got on youtube, but not to the tune of 13 million views with a stop on Monday Night Football.

It just shows how powerful social media is, and why I've stopped posing for things like "fun pictures" and I try to be very careful in public because everything ends up on Facebook or youtube. We all do stuff like this, such as trip on the sidewalk, knock drinks over on tables, or whatever, and that's just me getting out of my car this morning.
I don't mean to sound grouchy or defensive, but this deserves its 15 minutes - OK, 30 minutes - and not much more.

Who are the players on the Western Carolina roster that Georgetown needs to be aware of?

Allow me to be self-indulgent for a moment. What is your perception of the Georgetown Hoyas program?

To be honest, I don't watch a lot of Georgetown basketball. My perception is that Georgetown has shown consistency over the last 25 years with a physical style that is effective and needed in the Big East. I live in ACC country, where speed is seems to be more coveted that having 7-foot bangers. As far as Georgetown goes, I see dominant players such as Patrick Ewing, Alonzo Mourning and Dikembe Mutombo banging opponents like bumper cars. The names change, but the winning tradition doesn't. Being 8-1 with wins over UCLA, Texas and what looks like an ugly win over Tennessee tells me the 2012-13 Hoyas won't back down from anybody.

Western is a team on the rise, but not to this level, especially on the road. I'll go to Harrah's and take Georgetown by 13.