The Georgetown Men's Soccer Team advanced to its first-ever Final Four with a thrilling 3-1 victory over San Diego on North Kehoe Field. After a scoreless first half, San Diego struck first with a goal off a corner kick but Georgetown freshman stud Brandon Allen quickly returned the favor with an equalizer less than a minute later. Georgetown freshman Melvin Snoh put the Hoyas ahead with his first ever goal around the 70 minute mark and Andy Reimer later cemented the win with a goal with less than 5 minutes to go. Hermann Trophy Semifinalist Steve Neumann tallied assists on all three goals.

The most amazing part of the game, besides the inspired play of the Hoyas, was the amount of people that came out to support the team. Its been reported that over 4,000 people were in attendance and late-arriving fans were forced to stand on the side of the field as North Kehoe was packed to full capacity. 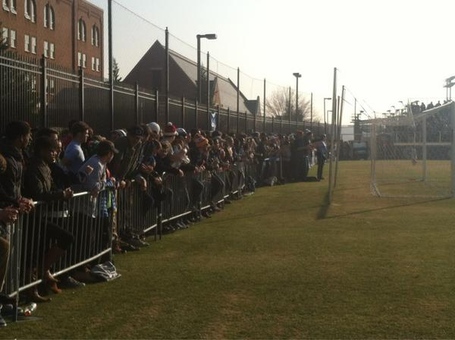 Georgetown will play the winner of the Maryland-Louisville game in Hoover, Alabama on Friday, December 7th.