Sleeping With The Enemy: The Gators Of Florida

Under the covers with the Gators.

Share All sharing options for: Sleeping With The Enemy: The Gators Of Florida

We're back! Your Georgetown fighting Hoyas open up the 2012-13 college hoops season and begin its pursuit of the NATIONAL CHAMPIONSHIP with a prime time matchup against the Florida Gators on the decks of the mighty U.S.S Bataan in the in the inaugural Navy/Marines Corps Classic. As always we're bringing you everything you need to know about Georgetown's next opponent, and here to shed some light on all things Gator is our good friend Alligator Army. Mr. Alligator Army, this 10-man beer bong is for you. Let's do this.

Hey man, we're playing on an aircraft carrier! Isn't that like, totally awesome?

YES. The only thing better? Winning that game. Which we are going to do. Despite our starting point guard being suspended! (Technically, the Bataan is a "Wasp-class amphibious assault ship," but whatever.)


There has been a decent amount of internet chatter lately regarding Billy Donovan's ability as a head coach. What are your thoughts on Billy D? Has he underachieved given his talent? If he were to leave, who would your choice be to be the next Gators head coach?

I know of one other current college head coach with two consecutive national titles, and he's pretty good, so...
But honestly, Donovan's talent went from underrated (that 2000 national runner-up team had oodles of good talent) to overrated (David Lee has always been David Lee) to underrated (the Oh-Fours were no one's idea of a championship-caliber class until they won a championship) to a little overrated again. But getting to the Elite Eight in the last two seasons with Erving Walker (ERVING WALKER) at point guard isn't underachieving in a vacuum; failing to reach the Final Four after having second half leads in the last two years is underachieving, but only in one game.

As far as Billy D's successor goes: I think it's Anthony Grant's job if he wants it.


Bradley Beal hung 8 points on the Cavs on opening night and is shooting under 30% from the floor. PLEASE give us a reason that he won't stink like the rest of the Wizards.

He's got so much talent and so many ways to help an NBA team. His rebounding was fantastic at the collegiate level; his athleticism is well above average; he drives well; his shot is a thing of beauty, even if the ball doesn't go in as often as it should. His problem? He might be too nice, given that it seems like he's taking his time to assert himself in Washington like he did in Gainesville.

What is your all-time Gators starting 5?

I've been to college football game in The Swamp and the atmosphere was insane. I've also been to an Elite Eight game featuring the Gators (YOU LOST TO BUTLER) and was pretty struck by the lack of Gator fans that made the trek to New Orleans for it and those that were there seemed pretty ambivalent during the game which was tight throughout. Does anyone really care about hoops over there?

People care, but it's a much smaller and less visible crew of people who care. The long-term Florida basketball fans that do exist are few, and don't compare to long-term Georgetown or Indiana or UCLA or Kentucky fans: Are they gonna remember Vernon Maxwell, Dwayne Schnitzius (rest in peace), Neal Walk? Students who remember Noah et al. are still getting admitted, but they don't come out for non-conference games like they should, and the tendency of Floridians to turtle up when it gets cold hurts attendance, too.

I think Donovan's dynasty, unquestionably the best era in Florida hoops, has gone a long way toward making people care. But Florida basketball may never truly be on par with Florida football.

Is it Tebow time yet for the Jets? Relatedly, talk to us about how Tebow is perceived by the Gator Nation. Is it always Tebow time? 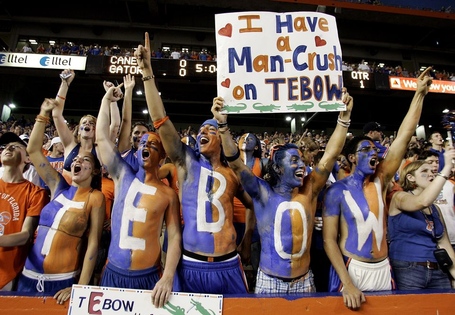 It's always Tebow Time at Florida. via media.cmgdigital.com

It's not Tebow time so much as it was never really Mark Sanchez time. Throw whatever dude behind that line you want; he's screwed regardless. Tebow still matters very, very much to Gators, to the point that my few complaints about him (the hiding of a concussion in 2009, him getting more credit for 2006 than Percy Harvin does, The Promise being really overrated) make people wonder if I don't like him. I do; I just see faults in everyone, the most decorated Gator in our athletic department's history included.


Is it weird that former Gator Erin Andrews is single? I mean, I guess it makes her more attractive, right?

It's not weird, and I don't think about EA a lot. She's pretty, smart, and hard-working, but she was the victim of a truly horrific and public bit of stalking that would traumatize a lot of people. I hope she finds happiness, is all.


If I have one Saturday night to party in Gainesville, where am I going and what am I doing?

You're going to want to go downtown, to a bar like Mothers, but you'll end up in Midtown, the strip of two blocks immediately north of campus that is a shitshow from sunset to 2 a.m. Thursday to Sunday. I don't go out much, but I do enjoy needling the bars in Midtown that have Twitter accounts.


Who are the players that Georgetown needs to be worried about on Florida on Friday night?

Kenny Boynton could shoot Florida into or out of any game he plays in, but with temperatures expected to dip into the 40s and a little wind likely, pounding the ball inside makes a lot of sense. And Patric Young playing in Jacksonville again means he's gonna try to show out. So worry about him.


Is ‘World's Largest Outdoor Cocktail Party' the greatest 5 words uttered during the year in Gainesville? Aside from losing to Georgia, of course, is there anything bad about that weekend?

"Touchdown, Florida Gators! Oh my!" would be those five words. And that weekend takes place in Jacksonville, which is a bad thing.

Any signature foods at a Florida tailgate?

Something from Publix. Beyond that, not really: We generally don't eat gator or anything. 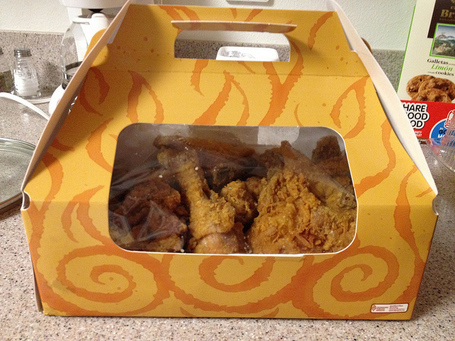 (Casual note: The fried chicken at Publix is the tits.)

What are your hopes for the Gators in the SEC this season? With a Top 10 preseason ranking, would anything less than a Sweet 16 appearance in the Dance be a disappointment?

I'm expecting a Sweet Sixteen trip, and hoping for more. I don't think that exiting earlier than that would be a disappointment, per se, but I'm sure it'll leave a bitter taste in more than a few mouths.

Cold weather is gonna make it difficult for either team to warm up their shooting strokes (and, also, literally), but I think Florida's got more weapons (military joke!) and wins a low-scoring game, 65-57 or something.

Georgetown Set To Tip Off Against Florida Aboard the U.S.S Bataan