Share All sharing options for: The Casual Awards: Hoyas Top The Mount

Your Fighting Hoyas of Georgetown improved to 4-1 on the young college basketball season with a 72-50 victory over the Mountaineers of Mount St. Mary's in a game that was way more uncomfortable than it should have been. Before we flip the switch to focus on the upcoming showdown with the Tennessee Volunteers in the SEC-Big East Challenge, we're handing out hardware to those most deserving. Away we go!

The Chris Wright Heart of a Champion Award:
Otto Porter. Porter had 17 points and 13 rebounds to lead the Hoyas to sweet sweet sweet victory over The Mount. Porter was 7-8 from the floor in yet another excellent shooting effort, and chipped in 2 assists, 2 blocks and a steal to boot.

Georgetown Coach Openly Trolling THE GLOBAL PHENOMENON Award:
JT3 after the game on Saturday: "I thought in the first half we were too casual as dribblers and too casual as receivers. So once we stopped being so casual out there it wasn't as bad." We have just changed the locks at PHENOMENON headquarters.

Taliban Award:
There's no way that the truck broadcasting the feed on ESPN3 can be located anywhere but in a cave in a mountain range somewhere in Afghanistan. It is now the year 2012 and I can watch a horse race in perfect HD on my mobile device while taking a dump, but if I want to watch the Hoyas playing a game in our nation's capital I have to do it on my computer on a feed so blurry that I might as well be watching fucking Q-Bert. Q-Bert is awesome, by the way.

Kevin Love Award:
Both Otto Porter and Greg Whittington had double doubles for the Hoyas, which is the first time that has happened for Georgetown in a long ass time, too long ago for me to recall and I am way too lazy to interrupt my Cyber Monday online purchasing to look up when exactly it was. Porter and Whittington combined to hit 15-19 shots from the floor (half of the Hoyas 30 field goals) and grabbed 24 of the team's 38 total rebounds.

Abyss Award:
Where the hell is our depth? In a game that was tighter than it should have been JT3 utilized a tight 7-man rotation, with only Jabril Trawick and D'Vauntes Smith-Rivera getting any real minutes off the bench. Stephen Domingo, who played 17 minutes against Liberty, only saw the court in the final half-minute along with Ayegba, Bowen and Caprio. 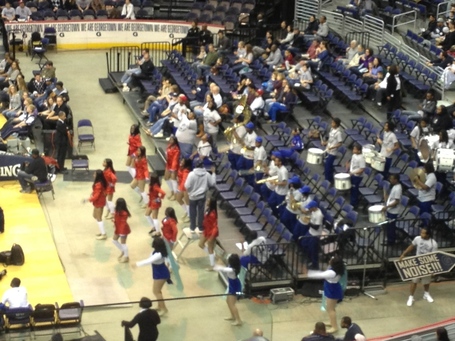 Skyfall Award:
Dudes/dudettes, have you seen this movie yet? Wow! Maybe it's that I had really low expectations or that I saw it in an IMAX theater which blew my mindgrapes, but this was nearly 2 and a half hours of the best time I've had in a movie in years! Bond is back! Relatedly, Markel Starks also appears to be back, putting together his third solid game in a row. Georgetown is going to be tough to beat if Markel can keep his shit together this season. 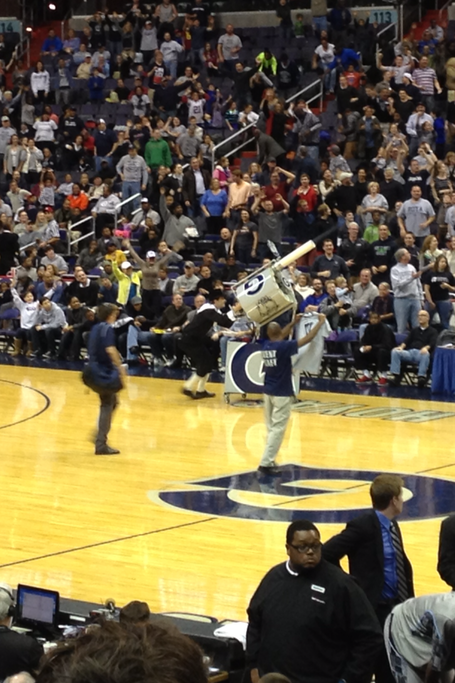 Mount St. Mary's Got Talent Award:
Keep an eye onMount St. Mary's first-year coach Jamion Christian, who at just 30 years old had the Mount very well-prepared and kept this game closer than it should have been.

Ted Leonsis Award For Getting Things Done:
The dimmer switch to brighten the court and dim the stands in Verizon to make these games actually watchable is apparently too costly to make happen, but that hasn't stopped Mr. Leonsis from stepping up the arena in other areas, most notably this juicy turkey burger. 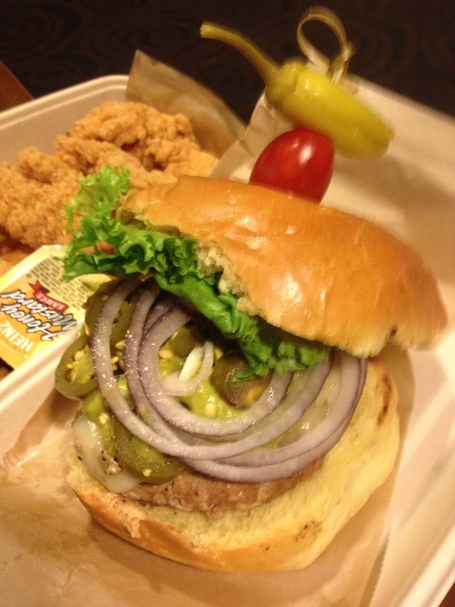 Big Man U. Award:
Though he continues to lead the nation in missed two-footers and getting stripped under the basket, Mikael Hopkins again turned in a very serviceable game for the Hoyas. The sophomore center matched his career-high of 13 points and had 3 blocks.

The Promised Land Award:
I've done my best to live the right way/I get up every morning and go to work each day. From one of Bruce's best songs come these lyrics dedicated to Georgetown's own Nate Lubick! Lubick continues to do the dirty work for the Hoyas and against The Mount it was no exception. Nate finished with 8 points on 4-5 shooting, 6 rebounds, and 4 assists in yet another solid effort from the junior forward.

We Are Georgetown Award:
Here is the Intro Video at Verizon for the 2012-13 season:

Sopranos Award:
The Georgetown Hoyas bench has just about as many people in suits as players in uniform. 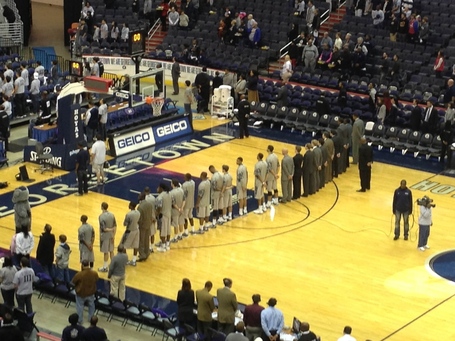 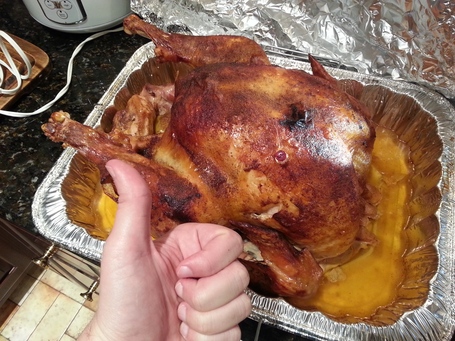 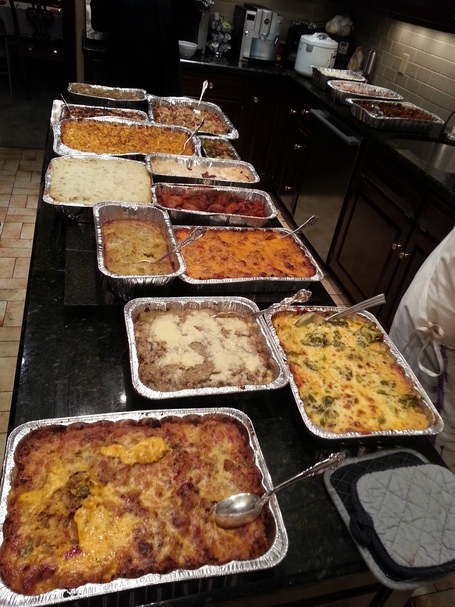 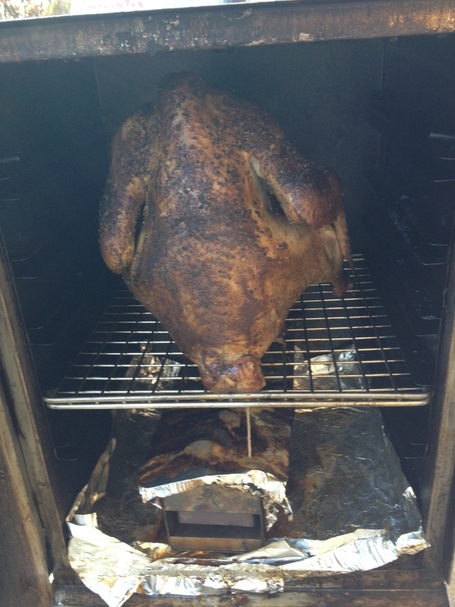 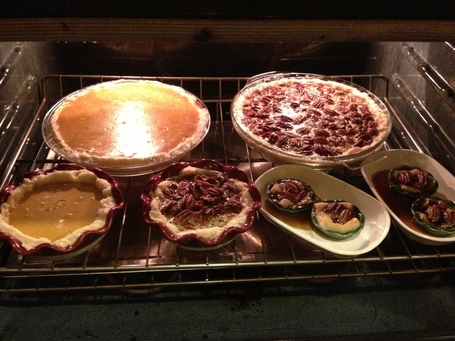 First Down Award:
Ray Rice had a great run and all but if this is a first down then I am a peanut.

Old Balls Award:
UCLA. Well, I guess that win over nationally ranked powerhouse UCLA wasn't so impressive after all. After beating woeful Georgia by just 3 points to salvage their dignity ion The Legends Classic, UCLA went out last night and lost to Cal Poly at home after blowing an 18 point lead with just over 12 minutes left. Kyle Anderson has been benched, Shabazz Muhammad is taking a bunch of bad shots and Ben Howland has no idea how to bust a zone. I was hoping the win over UCLA would carry a lot of weight come March but no I am not so sure.

Jim Nantz Award For In-Game Commentary:
Here are a few casual nuggets from the Game Thread:

If we win it means nothing. If we lose we are fucked.

over/under on how many minutes before I get busted and yelled at by a great aunt?

So far this looks like every game against a weaker opponent

starts season 1-2. losing to Davidson and Gonzaga.
no. I don’t miss you at all

FML.. Going back to sleep..

Are out in force. Are they the college that is connected to the Greenbelt Station, next to Chipotles?

today i am thankful for this blog

which is the only reason i have friends

Not playing hard at all

Limpest "airball" chant from the crowd I have ever heard only adds to the malaise.

I’d say I’m surprised by the score but for our hoyas, this seems about right. clearly the tryptophan coma is still going strong.

This has the feel of an NCAA tournament game ...

In that the Hoyas are playing in the afternoon, in a half-full arena against a supposedly overmatched mid-major opponent and looking like crap.

this game is stupid

Random observation: You never really remember that Zoey Deschenal is in "Almost Famous"

so it’s always a bit of a surprise

ESPN3 is the WORST. need windex Does this earn me another score update? Lots of free throws at next practice