The Casual Awards: Shabazz This.

Share All sharing options for: The Casual Awards: Shabazz This.

The Georgetown Hoyas defeated the UCLA Bruins last night and before we focus on tonight's game against the Indiana Hoosiers as usual we're handing out hardware to those most deserving. Away we go!

The Chris Wright Heart of a Champion Award:
Markel Starks. Starks was great against the Bruins, leading all scorers with 23 points but more importantly finally acting like the floor general the Hoyas will need him to be. Can't say enough about his performance last night so I'll just stop right there, but Starks deserves all of the praise he's receiving from the national media today. Hopefully the same narrative will be written about tomorrow.

Shabazz This! Award:
Greg Whittington, who played out of his mind all night and sent this message back to Westwood:

Dickie V Award:
Dickie V. Say what you will about Vitale, but when push comes to shove he is still the most entertaining guy calling games and he knows what he's talking about. Last night we had Otto Porter officially anointed as a "PTP-er", Greg Whittington's name was screamed like 6 times in a row after those back to back threes and there was an absolute freak-out when Jabril Trawick converted the acrobatic layup on one end and then hustled back to cause a tie-up on defense on the other. Can't wait for tonight when he spooges all over the Hoosiers.

Thank God for Otto Porter Award:
Otto Porter. Porter, who was in the shadow of the Shabazz hype surrounding this game, emerged with gusto while pouring in 18 points, grabbing 11 rebounds, handing out 5 assists and blocking 5 shots. Oh, and he also had 3 steals and drained two clutch threes that prevented UCLA from getting a little too close for comfort in the 2nd half. When was the last time Georgetown had a player that could do everything that Porter can? Ever?

Bizarre Fans of the Game Award: 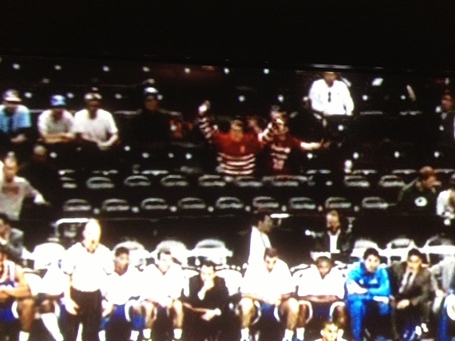 These two weirdo Hoosier fans spent the entire night flapping their arms on each UCLA possession and openly rooting for a Bruins - Hoosiers final. Sorry to spoil your party, jerks.

Legends Classic Award:
Patrick Ewing! Georgetown legend Patrick Ewing took his seat courtside across from the Hoyas bench and witnessed an inspired Hoyas team effort to take down the Bruins.

Old Balls Award:
The Texas Longhorns went over to Maui and lost last night to the Division II Chaminade Silverswords. I'm sure Rick Barnes was looking forward to his casual whalewatching tour and round of golf today at Kapalua, but not after one of the worst losses in the program's history. Oh, Georgetown gets those very same Longhorns on December 4th in the Jimmy V Classic at MSG. Hook ‘em!

That Boy Good Award:
Screw Shabazz Muhammad, I was more impressed with UCLA's Jordan Adams, who was able to create his own shot off the dribble and kept UCLA in the game with a series of acrobatic baskets right when it appeared the Hoyas were ready to pull away. Adams paced the Bruins with 22 points and managed to hoist 20 shots in his 29 minutes. No wonder Oak Hill went undefeated last year with Adams and DSR in its backcourt. Speaking of which...

What The Hell Happened To D'Vauntes Smith-Rivera Award:
DSR. DSR was largely invisible against UCLA, playing just 12 minutes and going scoreless. DSR's minutes were limited by the effective play of Starks, Whittington and Trawick, and though he didn't put up any real stats to speak of, he didn't do anything particularly bad either. He did show an explosion to the hoop for a layup that was waived off as it came just after the shot-clock had expired.

Sir Mix-A-Lot Award:
Georgetown is long, strong and we've come to get the friction on...or at least something to that effect. Some stat I saw circulated last night showed that the Hoyas trot out 4 guys 6'8" or taller, which is size matched by only one team in the NBA (the Utah Jazz). To put it another way, the Hoyas are the 2nd longest team on the fucking planet.

All I Want For Hannukah Is One Of These Award:

The below is oddly in the lobby of the Hotel Harrington in Washington, DC. 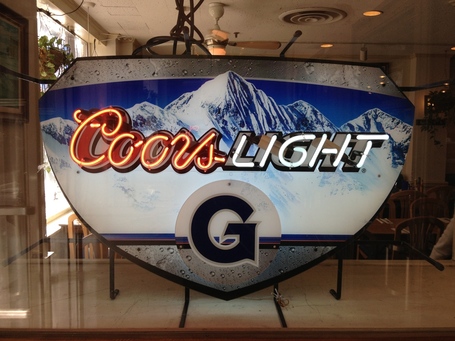 Craig Esherick Memorial Award:
Ben Howland. Georgetown deployed a very effective 2-3 zone against the Bruins, a zone that we all know is busted by putting a player with height and passing ability at the top of the post and letting the offense run through him. Howland had Kyle Anderson at his disposal yet continued to force the offense through a woefully ineffective Larry Drew. On behalf of the Hoya Nation, thank you Ben Howland.

Jon Rothstein Sucks Award:
For those unaware (probably most of you), Jon Rothstein is a plucky young New York-area college basketball studio host. Those of you drawn to twitter nonsense might have noticed young Mr. Rothstein carving a niche in providing journalism-like material. Basically, he calls college basketball coaches and visits their practices, gets sound bytes on each member of the roster, then relates said sound bytes in 140 characters or less on twitter. In between these methodical and insight-free rundowns, Rothstein likes to count the number of days until college basketball season starts, begin each day with one of two quotes, repeated on a seemingly endless loop, compare forgettable college players to their equally middling predecessors/NBA counterparts, and, of course, recount his meals (unforgivably undocumented). Last night he compared Otto Porter to Boris Diaw.

Growing Pains Award:
Mikael Hopkins had one of the worst first 20 minutes of any Hoyas big man in recent memory, with zero points, 3 fouls, 5 turnovers and more than a couple episodes of laziness that had me screaming at my TV and had twitter ablaze with requests to have him pulled off the court. JT3 stuck with him though and he responded, finishing with 6 points on an efficient 3-5 shooting from the floor. A bit concerning for Georgetown that JT3 had no one to turn to after Hopkins got into fould trouble and eventually fouled out, opting for Stephen Domingo to spell Hopkins rather than put in Moses Ayegba or any of the freshmen bigs Bradley Hayes or Brandon Bolden. 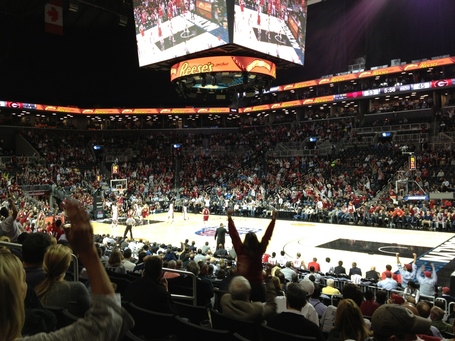 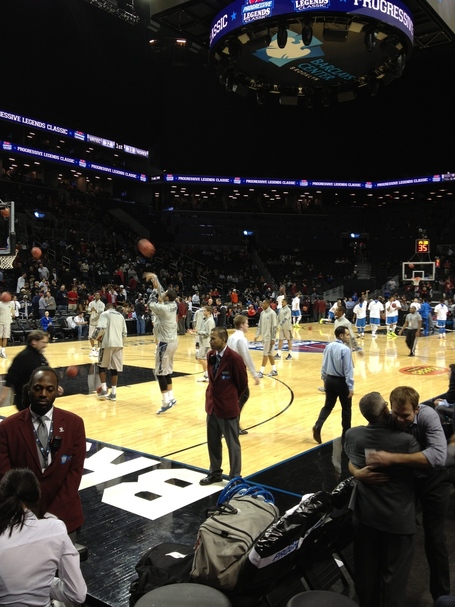 OH GODDAMIT, ONE THING I DID NOT MISS THIS OFF SEASON WAS DICK VITALE

when do we get our casual teleportation swag

To get me to the gamewatches with greater haste?

starks has his starting spot on lock

if he keeps up this defensive pressure. I am loving the intensity right now

can we keep this starks forever?

Their cheerleaders are very pretty.

Both Otto and Markel yelling at him to establish post position

my girlfriend can have otto's babies

Andy Katz is a boner killer

must sacrifice for the sake of the game. see you after a heart attack or two

The #1 ranked Indiana Hoosiers are NeXt.