Sleeping With The Enemy: The Hoosiers Of Indiana

Under the covers with the Hoosiers.

Share All sharing options for: Sleeping With The Enemy: The Hoosiers Of Indiana

Wow, what a win last night over UCLA! As much as we here at THE GLOBAL PHENOMENON would like to kick back and bask in the glory of sending Shabazz Muhammad back to Los Angeles (or at least to an early game against Georgia), we've got the #1 team in all of the land, the Indiana Hoosiers, to focus on. Special thanks to The Crimson Quarry for providing answers to our hard-hitting questions. Hoosier-folk, this refreshing Corona is for you. Let's do this.

Number 1 in the country, huh? Pretty impressive. You can be honest with me since no one will read this anyway...do you think the Hoosiers are the best team in the nation?

I have to confess that at this point in my life, trying to keep the Crimson Quarry rolling as well as working a job and raising a family, I don't have as much time as I used to have to keep track of everything going on outside the Big Ten. So I can't provide a detailed breakdown of what IU has that Louisville, Kentucky, and Kansas don't have. What I can say my memory includes two IU teams that either won the NCAA title (1987) or spent part of the season ranked number one (1993, my freshman year at IU). I think this current IU team compares favorably to either of those teams because of the crazy depth that this team has, its experience, and the advantage provided by Cody Zeller. Zeller is the best big man in the country and Jordan Hulls may be the best outside shooter in the country. That combination alone would allow a team to win quite a few games. Add in a bunch of athletic wings, and I feel pretty good about this team and its ability to create major matchup problems for anyone who tries to guard them. The two major knocks are frontcourt depth (exacerbated by the absence of Derek Elston, Hanner Mosquera-Perea, and Peter Jurkin because of injury or NCAA suspension) and defense. In particular, IU's starting guards are small, and Hulls is a proven defensive liability. Still, no team is perfect. I'm certainly not guaranteeing a title, but I find the number one ranking plausible.

Talk to us a bit about your thoughts on Tom Crean. It seemed as if there were a couple years of growing pains but now he seems to be recruiting the hell out of it and the results are obvious. Do you think this is sustainable or are you thinking that you better win now? Relatedly, if I'm a recruit considering a bunch of top-tier schools, convince me why I should play at Indiana.

I'll answer these together. I never doubted Crean's effort as a recruiter, and his Marquette record suggested that he is a good coach. Still, the crater in which he found himself was like virtually nothing I can remember in college basketball. Of your two choices, I think I lean toward sustainable. Obviously, once-in-a-generation #bigmenwholive50milesfromBloomington aren't going to come around every year, and considering it's been 26 years since IU's last title, falling short this year will hurt if it happens. But the best way to win championships is to consistently contend for championships, and Crean seems to be on that path. After signing Zeller in 2011, he signed a top 5 class for 2012 and has signed another top 5 class this week. He landed a top 10 recruit, Noah Vonleh, who has no connection to Indiana or the midwest and who was recruited by top shelf programs. If IU continues to accumulate such talent, then I do think the conference titles and Final Four appearances will come. Still, other than the 2003 Final Four run with Marquette, Crean has no history of deep tournament runs. I've very happy to have him, but have to concede that the jury still is out in some respects.

IU is an attractive destination for a variety of reasons. The fan support, among students, alumni, and residents of the state at large, is tremendous. IU never dropped out of the top 20 in home attendance even during the three straight 20-loss seasons. While small college towns aren't for everyone, Bloomington is a very nice one, and it seems to me that Crean, his staff, and his players have created a good atmosphere. I can't recall any legal difficulties for any IU player during Crean's tenure, things are going well academically, and the members of the team seem to mesh well. These things can change, but it's a very good atmosphere right now.

Are you over Bob Knight yet?

Ah, this one. I don't think IU fans should ever get "over" Bob Knight. He, more than any other person, is responsible for IU's tradition and fan following. He was a great coach and ran a great program; unfortunately, his personal flaws led to his downfall. Like most IU fans, I hope that someday he does decide to return to Assembly Hall for the ovation that he deserves. At this point, however, it's mostly a sideshow. His current lack of a relationship with IU doesn't change what he did for IU.

If I have one night in Bloomington, where am I eating and where am I partying? One guy I know was there recently at a bar called Nick's English Hut and the kids were playing some sort of variation on beer pong called ‘sink the biz.' What the hell is that? 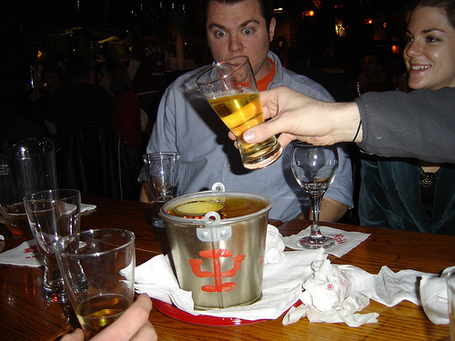 Sink the Bismarck is the game. It involves a metal bucket filled with cheap draft beer and a small glass (eight ounces, maybe) floating in the bucket. Everyone at the table has his or her own glass of beer, and takes a turn pouring some amount of beer into the glass (which I'm told is specially weighted to float in the beer--I don't know, I've never tried it at home) while trying not to sink it. Whoever "sinks the Biz" with his or her pour has to reach into the bucket for the glass and then chug the beer (fun AND sanitary!). Nick's generally is considered *the* IU bar, but there are plenty of other places along or near Kirkwood Avenue in downtown Bloomington, just off the campus, most notably two Kilroy's locations, the Upstairs Pub, and the Bluebird for live music. For eating, Bloomington has a very respectable array of international restaurants for a town its size. Perhaps the most frequently recommended dining spot is Janko's Little Zagreb, a bare-bones steakhouse a few blocks from campus.

How good is Cody Zeller and pick a current NBA pro that you would compare him to.

He's great. I'm not old enough to remember the likes of Isiah Thomas and Walt Bellamy playing for IU, but in my close to 30-year memory of IU basketball, we've never had a player who was so incredibly dominant at his position. I don't watch enough NBA to compare him to a current pro, but given his athleticism, ball handling ability, and shooting ability I suspect he will be more of a power forward in the NBA than a true center.

Gratuitous ‘Hoosiers' question: Best basketball ever made? Assuming you say yes, give me your next 4 hoops movies to round out the top 5. 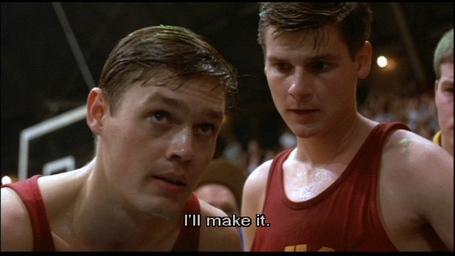 Yes, of course. I'm not sure I can come up with a top 5, but I'll put in a plug for Blue Chips, which isn't a very good movie but provides some excellent cameos if you watch closely: Bobby Hurley playing point guard for Indiana, current Purdue coach Matt Painter playing for one of the teams Nick Nolte's Western University team played earlier in the season.

We at Georgetown rarely get to play Big 10 folk. What are your impressions of the Georgetown basketball program?

I'm in my late 30s, so when I was just coming of age as a sports fan in the mid 1980s the Hoyas were the team in college basketball. The 1985 title game between Georgetown and Villanova is the first one I remember. So I generally have a favorable opinion of Georgetown and its place in college basketball. I also like your current coach quite a bit. I get annoyed when prominent coaches hold their sons' hands throughout their playing and coaching careers, so I admire JTIII and his father for the fact that he went out on his own. I don't think it's a coincidence that he's the most successful second generation coach.

Other than Zeller, who are the main guys that Georgetown needs to be concerned about tonight. 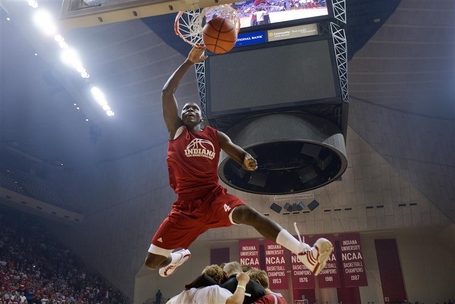 Jordan Hulls is one of the best three point shooters in the country. Victor Oladipo is an explosive athlete. Freshman point guard Yogi Ferrell has looked very comfortable so far.

How do you see this game playing out? Final score predictions?