Sleeping With The Enemy: The Bruins Of UCLA

Under the covers with the Bruins.

Share All sharing options for: Sleeping With The Enemy: The Bruins Of UCLA

Georgetown. UCLA. Two of the most storied programs in college basketball face off tonight in the semifinals of the Legends Classic and as usual we here at THE GLOBAL PHENOMENON are bringing you everything you need to know about Georgetown's next opponent. Special thanks to Carlos Sandoval of Go Joe Bruin for providing answers to our hard-hitting questions. Mr. Sandoval, this Miller Lite is for you. When you're done reading this opus, check out our answers to their questions HERE. Away we go.

Congratulations, my man, both Georgetown and UCLA are LEGENDS! No real question here but feel free to gloat. Also, feel free to take a shot at Georgia here because no one understands why they're in this thing with us and Indiana.

Hey, Indiana needed an unranked team to play, too. They don't want to give us the easy match-up without getting a semi-bye, too.

(I really shouldn't be talking smack so early here.)


Talk to us about Kyle Anderson, who famously spurned Georgetown (and Seton Hall I suppose) for UCLA. From what you have heard and seen thus far, is he the real deal? How many years to you expect him to play before he heads to the NBA?

I doubt he's on anyone's 2013 mock draft yet, but that's not saying he's not on a ton of NBA scouts' radar. I mean, how do you know if this guy's type of play will fit in the NBA? Dude's long, plays ridiculously slow but somehow beats defenders off the dribble, he finishes around the rim well, he's got excellent passing skills and he rebounds like a big. He has serious triple-double potential if he's manning the point (and he hasn't been so far this season; that's ex-UNC guard Larry Drew II playing the offensive point).

All the UCLA fans want to make the comparison to Magic and that's probably as close as you're going to get. He's versatile but I have no idea what he's going to be ridiculously good at. Yet.

What is your all-time starting 5 for UCLA? 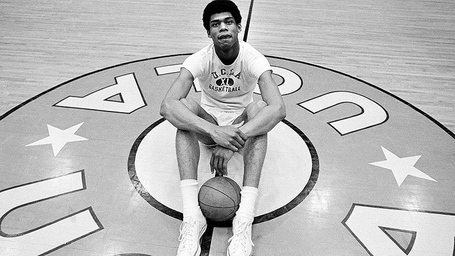 Give me Gail Goodrich and Reggie Miller in the backcourt, Kiki Vandeweghe, Bill Walton and Lew Alcindor in the front. I know I'm leaving off quite a few players, but that's the dilemma you face when your school produces nothing but NBA legends.

Not that Ben Howland's job is in jeopardy, but if he were to leave UCLA who would be your top two choices to be the next head coach of the Bruins?

I'll take all the sexy coaching names you have. Shaka Smart, Brad Stevens. Ben Howland has annoyed the hell out of me with his rotations and total infatuation with the Wear twins.


If I am visiting UCLA for one night, where am I eating and where am I partying? 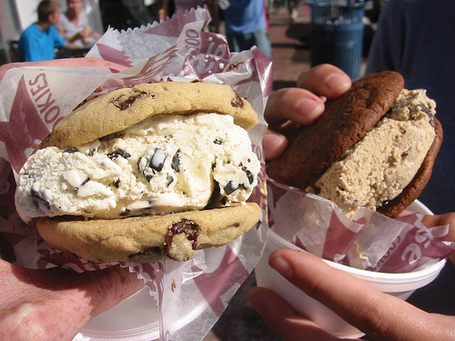 You're eating at Diddy Riese, the greatest ice cream sandwich joint in Los Angeles. You're also eating at In-N-Out; we know you guys wish you had what the Best Coast has.

Partying? That's a different story. We may be all Los Angeles and stuff but parties in Westwood? Good luck. Try East LA or something.


Please present a compelling case that Travis and David Wear will ever be anything other than the next overhyped tall white kids from Southern California. Since the Wooden era, Cherokee Parks is the closest there's been to a good one - any argument?

I have no argument. These Wear kids, they're super versatile and really willing, but watching them play -- and mainly, watching them play together on the floor -- is a total pain to watch. Defensively, having both on the floor at the same time is maddening and they both have bone-headed moments where they take awful mid-range jumpers for absolutely no reason. These twins will be legitimate rotation players, but starters, especially at the friggin' 4 and 5 That's a mess.


Talk a little bit about the revamp of Pauley Pavilion - how cool is it?

New Pauley looks fantastic and, to these eyes, it's a hell of an improvement. They did a nice job with tying back the program to its rich tradition and reminding opposing teams that our history is better than theirs. A good chunk of seats were added, too, and the video board is awesome.

Now, some fans tend to think that New Pauley is basically old Pauley Pavilion that was simply renovated by encasing it in glass, but these are also the kids who say things like, "it looks like the same, old Pauley on television," intimating that they've never been inside. Of course, these are also the fans that would tell you water is bad for you if UCLA athletic director Dan Guerrero started drinking water on TV.

Personally? I think it's fantastic but, I don't know, maybe it looks less sexy on TV, if that even matters.


UCLA's major off season move a couple of years ago was bringing Korey McCray in from the Atlanta Celtics as an assistant coach. This move immediately paid dividends by landing recruits, and McCray has notably helped put together a great class this year in Shabazz Muhammad, Kyle Anderson, Jordan Adams and Tony Parker. Commitments aside, is this a successful long term strategy for UCLA?

Who knows? I know Ben Howland's gotten a lot of flack for his recruiting classes and even more flack for hiring McCray in order to help his recruiting, but it seems to be working beyond this class. UCLA's already signed four-star recruits Zach LaVine and Allerik Freeman and three-star recruit Noah Allen for 2013 and he's on the heels of a nice 2014 class, too. It seems to be paying off, although I can't directly attribute that to McCray's hiring.

Of course, that might not even matter if Ben Howland's gone after this season, which is likely if he doesn't have a successful campaign.


Shabazz Muhammad! Wow! Are you as absolutely shocked as I was that the NCAA cleared Shabazz just in time for the Bruins' primetime matchup on ESPN against the Hoyas? What do you expect out of Shabazz in this game?

I wasn't shocked at Muhammad's clearing as I was the NCAA investigation. They've had to do a hell of a lot of damage control for conducting what looks like a too-long, biased, lazy investigation.

If you're implying that the NCAA started to realize Shabazz gets eyeballs to TV screens, though? I suppose that's fair, but it's probably unlikely.

I have no idea what to expect of Shabazz in this game, though. If I were to guess, this offense will continue to go through Larry Drew II primarily and Kyle Anderson secondarily while Shabazz plays off the ball for a good chunk of the time, and other times, he'll get control of the ball and score at will. Jordan Adams has played well in that role, averaging over 20 points a game in the process, so it's not difficult to see Shabazz excel at that, too.


Now that the Reeves Nelson saga is behind you, in retrospect was it surprising that an undersized power forward, tattooed from head to toe, and hailing from the most lovely part of California would be a malcontent?

I think a lot of UCLA fans figured he was a bit of a snot but no one knew this guy was a full-blown d-bag who injures players in practices and urinates all over his teammates' clothes. That said, he was considered one of those "Ben Howland-type" players that were scrappy and athletic. Needless to say, I'm glad this kid is no longer associated with the program or, just as important, with the Los Angeles Lakers.


From Pink's to Philippe's, LA actually has some excellent local eats. What's the best in Westwood and will we find Josh Smith there whenever we visit?

Like I said before, Diddy Riese is where it's at. Fat Sal's is a solid sandwich shop around there and 800 Degrees is supposed to be a good pizza place in Westwood. (L.A. gets bagged on for not having good pies, but people just don't know where to look.)

If Reddit is any legitimate, Josh Smith actually eats out a lot, or did, at least. I remember one comment on UCLA's sub-reddit that said he ate a couple of burritos in one sitting before. Who knows, though? Given the dude's lost like, four pounds over the past year, that wouldn't shock me.

It took Jay-Z to pen a new NYC anthem. Will anything ever take the place of Randy Newman's legendary I Love L.A.?

Never, but if someone's going to come close, it's Jay-Z.

How do you see this game playing out? Final score predictions?

I think UCLA should beat Georgetown. UCLA has a lot of offensive weapons and though Georgetown's proven to have a formidable defense, these Bruins are just too damn talented especially with Shabazz Muhammad coming back.

That said, this is also Shabazz's first game in a UCLA uniform, so there might be chemistry issues. Meanwhile, Ben Howland also benches Jordan Adams -- by far his most dangerous weapon offensively outside of Shabazz -- and keeps Tony Parker's minutes to a minimum, despite looking pretty solid on both ends of court. Meanwhile, those Wear twins are tough to watch when both are in at the same time. (Notice how I don't mention Josh Smith; he's largely the last guy or second-to-last guy in the rotation.)

So Georgetown has a solid chance of winning, even if they, too, have struggled against lesser teams this season. That freshman of your guys' -- Smith-Rivera -- looks pretty solid and he'll be a tough cover all night.