Sleeping With The Enemy: The Flames Of Liberty

Under the covers with the Liberty Flames.

Share All sharing options for: Sleeping With The Enemy: The Flames Of Liberty

What, did you think that just because we're playing a small school like Liberty that you wouldn't get a Sleeping with the Enemy feature this morning? Did you not think that we would go to great lengths and scour all corners of the Earth to bring you everything you need to know about our next opponent? Don't you know better by now? WE ARE INVINCIBLE! Special thanks to Steve Behr, the Sports Editor at the Watauga Democrat, for providing answers to our always intriguing questions. Steve, this nice Coors Light is for you. Away we go!

Tell us something about Liberty University that Georgetown fans would find interesting.

For starters, I'm told it's the largest Christian university in the nation with 12,500 students on campus, and around 100,000 students taking online classes. It's a relatively young college, founded in 1971 by Jerry Falwell. When their football team played Appalachian State, the sports information director said that people called them "Jerry's Kids." I have not covered a game up there since 2002, but they served Taco Bell for a pre-game meal. Since media guys will eat just about anything you shove in front of their faces, making a run for the border was cool.

He Who Shall Not Be Named's brother Seth Curry initially committed to Liberty and then transferred to Duke. To be honest, he's the only basketball player that pops into my mind when I think Liberty. Who am I missing?

Well, we're not exactly talking about North Carolina here, but they have a few names. Julius Nwoso played with the San Antonio Spurs from 1994-95 and briefly with the Boston Celtics the next season. He also played professionally overseas for several teams until 2010. Peter Aluma is the former center for the Nigerian national team. On the women's side, Jeri Porter is the head coach at George Mason, and Avery Warley is the center for the Phoenix Mercury.

It appears Liberty's head coach Dale Layer has some Big East experience and I found this interesting when doing some research on him:

‘Layer, 53, came to Liberty following a successful run as an assistant coach at BIG EAST member and nationally ranked Marquette in the 2008-09 season, where he worked with the guards. Layer helped the Eagles to a 25-10 record and a second round appearance in the NCAA Tournament despite lacking the full-time services of All-American Dominic James, who was injured near the end of the season.'

Do you, in turn, also find this interesting?

There are a lot of coaches who are either former assistants, or former head coaches from power conferences trying to either start, or rebuild resumes. Layer was actually an assistant at Liberty during the 2007-08 season under head coach Ritchie McKay.

If I have one night in Lynchburg, Virginia, where am I going and what am I doing? If you have never been to Lynchburg and had one night there and could pick one meal to have, what would it be?

You're on your own on this one. I stopped at a Texas Steakhouse on my way home in 2002. Haven't been to Lynchburg since. 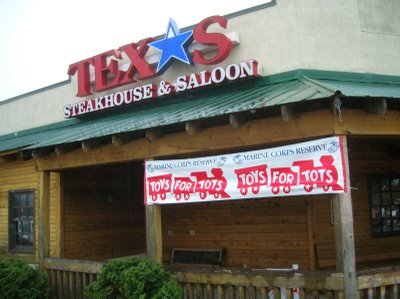 And there she is.

Yay. Anybody whose nickname is "The Boss" gets a yay in my book. He was Born to Run, while I was made to walk or drive my old Buick, but I never change the radio station when a Springsteen song is playing.

Many years ago, one of the dudes on our site played against Oral Roberts University in hoops and the campus experience was, well, different. Men wore ties, no fraternizing with women, etc. What's the campus atmosphere like at Liberty?

I talked to a Liberty grad who has a son at the school. He said it's a lot like a regular public campus. There are a lot of restaurants and activities on campus that keep the kids busy, but there are no uniforms or anybody (that I know of) trying to write a Broadway musical called "The Book of Liberty" (you have to be a Book of Mormon fan to get that one). Anyway, there is a place called Doc's Diner that I'm told is very popular. 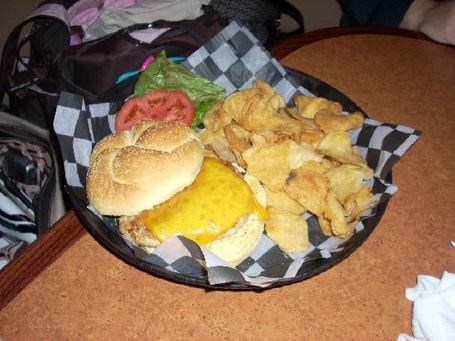 The turkey burger at Doc's Diner, via media-cdn.tripadvisor.com

I recently learned that Liberty is considering chasing the FBS dream. This is near and dear to our heart as it's contributed to the breakup of the traditional Big East. Does it seem like a realistic move? Any opinion on its upside?

Money and visibility are always the upsides on a move like this. The problem is a league has to have an opening. It all depends on how the individual conferences view Liberty's television market. Conference USA snubbed an established program such as Appalachian State and took in Charlotte, which doesn't start football until 2013. The deciding factor was TV eyes. I have a feeling that there will be another major shakeup that will likely involve the Big East, Conference USA and the Sun Belt. I have little doubt that Liberty would like to be a part of it, but jumping from the Big South to an FBS conference is like going from a DeSoto to a Camero.

Liberty Alum, Samantha Steele, is the new Erin Andrews and apparently got the job by becoming a hostess at ESPN Zone. She's also dating Christian Ponder. Any other famous alums?

How do you see Liberty finishing in the Big South this season? Potential NCAA Tournament team?

Liberty was picked fourth in the South Division ahead of Radford and Longwood. Charleston Southern is expected to win it. Unless Liberty shocks an entire conference, I'm guessing it will tame a mid-major miracle to get an NCAA berth. Then again, it is a Christian school......

Who are the players on the Flames that Georgetown needs to be concerned about? Top scorers?

Don't know much about either team, but the Big East is still a top tier basketball conference, and the Big South school have some nice campuses. I'll take the Hoyas by 30 or so.