Your Georgetown fighting Hoyas opened up the 2012-13 campaign (for the second time) against the Duquesne Dukes and emerged with a rather shaky 61-55 victory. As usual we're handing out hardware to those most deserving, so away we go!

The Chris Wright Heart of a Champion Award:
D'Vauntes Smith-Rivera. DSR introduced himself to the Hoyas faithful with a bang, connecting on 6-7 from the floor (4-4 from three) for a team-high 19 points in his official debut, the most points for a Hoyas freshman since Michael Sweetney and Allen Iverson both dropped 19 in their openers. If DSR can provide this sort of spark on a consistent basis this season it will mean very good things for Georgetown, who will struggle to score after losing Henry Sims, Hollis Thompson and Jason Clark.

Big Man U Award:
Mikael Hopkins. Hopkins is getting a lot of crap after that game but what I saw was a player who was markedly better than Henry Sims was as a sophomore. Yes he gets stripped often but that is fixable, and he has very good footwork in the post and takes good shots (well, except for that very ill-advised three but even that didn't look too bad). The bunnies he has missed will begin to fall and I think he's going to be a very productive player for the Hoyas this season. It won't come without our being frustrated at times, but he's just a sophomore, he's playing big minutes for the first time and he deserves some slack.

The Sting Award for Endurance:
Greg Whittington. Whittington played all 40 minutes and grabbed a whopping 15 rebounds in the contest. Though he only shot 25% from the field, it was Greg's rebound off a Jabril Trawick missed free throw in the final minute and subsequent made free throws that finally put this outcome no longer in doubt. We'd all like to see Greg more involved on the offensive side, but this was a big time defensive effort from Whittington and he stepped up when he needed to. 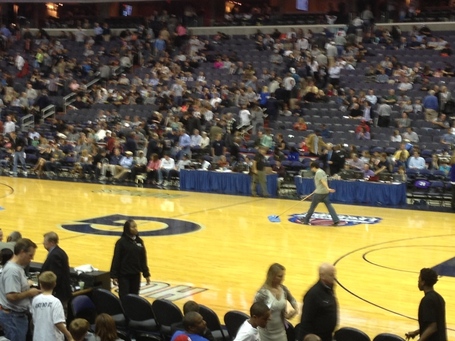 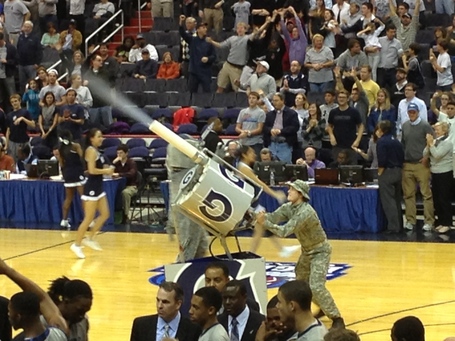 Our favorite T-Shirt Gatling Gun dude is back, and to ring in the Veteran's Day festivities he came out decked in camouflage. On a Veteran's Day note, before the Saints game yesterday in the Superdome they had one of those "soldier is being interviewed from Afghanistan on the jumbotron while his family is on the field but he is really in the Dome and then he runs out on the field to his surprised screaming children and crying wife" moments. Oddly touching. Documented. 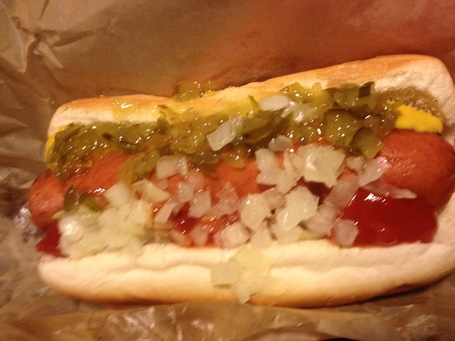 Hoyas Win Award:
Though it was a very nice surprise to have Bill Raftery calling this game on ESPNU (perhaps it was an olive branch offering by the basketball gods after the horrid showing by NBC Sports against Florida), the best part of the game was when the broadcast shifted for a few minutes to Rich Chvotkin's call of the game. Chvotkin's calls are legendary and his "muscle tussle" call on a Trawick drive was awesome.

Get Well Soon Award:
Otto Porter. Hopefully Porter was truly being held out for precautionary reasons and whatever symptoms he may have are gone because HOLY SHIT WE ARE FUCKED WITHOUT OTTO PORTER. That is all. 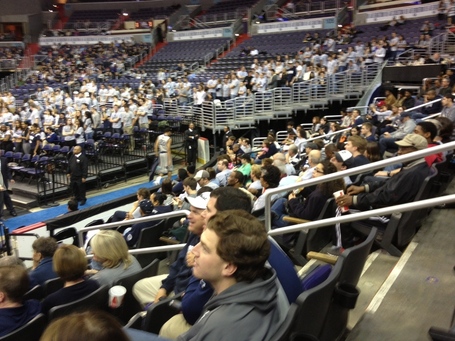 Please come back. Please for the love of God come back.

He Who Shall Not Be Named Memorial Award:
Named in honor of a former Davidson guard who now plays for the Golden State Warriors, this award goes to Duquesne's Sean Johnson, who poured in 21 of the Dukes' 55 points and nearly pulled this one out. He didn't though, which sucks for Duquesne but is pretty cool for Georgetown.

Not Exactly A Sellout At Verizon Award:

Call Child Services Award:
At one point the camera flashed to what appeared to be a young boy no more than 2 years old who was half-naked and wearing wristbands and a Duquesne hat.

The Moses Ayegba I Killed A Man With A Trident Award:
Nate Lubick. Suggested just today as a new Casual Award to be awarded for, of course, killing a man with a trident but also for hard fouls and general brutishness, this one goes to Nate Lubick who played a gritty 35 minutes and grabbed 7 rebounds to go along with 7 points. Most importantly, however, he got into a minor scuffle with a Duquesnian who tried to rip the ball from Lubick's hands. Honorable mention goes to Moses Ayegba, who managed to grab 2 rebounds in 3 minutes and pick up an offensive foul for setting an illegal screen.

The "Wait, Am I Going To See The Court This Season" Award:
John Caprio and David Allen. These are supposed to be the games where these guys get in during garbage time and the crowd goes nuts. I'll just leave this right here before I light myself on fire.

Old Balls Award:
Had a few minutes to kill yesterday morning so I flipped on the NFL GameDay thing on the NFL Network to see if I could get any meaningful news that might help my struggling fantasy football squad. First up was former coach Steve Mariucci who predicted the Saints-Falcons game would produce more than 100 total points. Next was Kurt Warner who predicted that Carson Palmer would throw 4 TDs against the Baltimore Ravens. Then Warren Sapp said Tampa Bay RB Doug Martin would clear 200 yards against the Chargers. I turned off the TV and drank some chocolate milk FOR THE WIN.

Delusional Award:
Everything will be fine, people. The boys in blue and gray pulled out the win despite best player all all-everything Otto Porter playing just six minutes. If he plays that whole game maybe the Hoyas cover the 15 point spread and we'd all be doing handstands in our cubicles right now because we found a GOLDMINE IN DSR.

Cynical Award:
RUN FOR THE HILLS THE SEASON IS ON THE BRINK OF DISASTER OH MY GOD EVERYTHING IS AWFUL WE CAN'T SCORE AND ALSO OUR CENTER IS JUST 6'9" AND ALSO WE HAVE HORRIBLE FACILITIES AND NO RECRUITS WILL EVER COME TO GEORGETOWN AGAIN! (Note: This award will likely go unchanged for the remainder of this season)

Jim Nantz Award for In-Game Commentary:
Here are a few golden nuggets from the Casual Gamethread.

wait, we have people who dunk?

this is a nice change

I would like three of him, an otto and roy back

It’s quieter in here than 2nd floor of Lauinger

But...why was Bill Cosby wandering around a runway?

Where was the TSA? So many questions.

Should I be worried that these No Talent Assclowns appear to be equally talented as us? 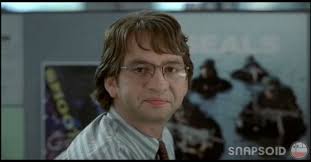 Lubick seems to have really learned the offense

we get completely different looks when he’s in so far

i should probably update my username

We are going to be mediocre this year

We are all sorts of hammered dog shit right now

THIS IS THE WORST TEAM IN THE A-10

we joined the A-10 already? 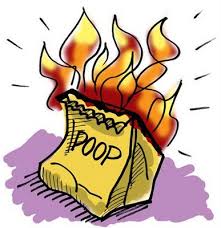 defense is great. offense is shaky. about whatd id expect when we lost our top three scorers from last season and our first team all big east player hasnt played since first few minutes.

I picked a horrible day to quit huffing glue.