Heart of a Champion

It's been over a month since we dropped a Headbands Series submission on your heads, and we're back with a vengeance on this very casual Friday with an entry containing one of Georgetown's most beloved former players, point guard Chris Wright! 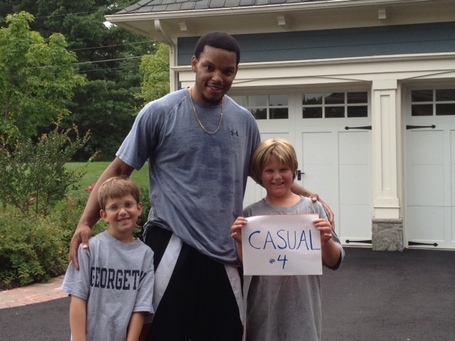 Wright, who is currently on the training camp roster for the New Orleans Hornets, is 6th in assists and 18th in points on the Hoyas all-time career list. Hoyas fans will remember Wright as the fiery point guard who battled back bravely from a broken wrist suffered in the 2011 season's final weeks to play for the team in the NCAA Tournament, where the Hoyas lost to eventual Final Four cinderella VCU. Wright's spirited play throughout his four year career at Georgetown led we here at THE GLOBAL PHENOMENON to crown him with the "Heart of a Champion" moniker, and the Chris Wright "Heart of a Champion" Casual Award has been named in his honor for the rest of time.

Casual Headband submissions have been flowing in from all corners of the earth, and we'll be unloading our casual coffers over the course of the season with the Tournament to determine the ultimate winner coming whenever we feel like it. As a reminder to those that have yet to play in our wicked game, to enter the 2012 Casual Headbands Summer Series Contest, all you have to do is follow the following simple steps:

2) Document your travels with casual pictures (cell phone pics work) of Casual Swag in front of a casual landmark or location. If you do not have Casual Swag*, get creative! Write the word 'casual' on something, print a copy of the home page of this site to use for documentation, do whatever you want.

1) tickets to Hoyas games (including and likely limited to the definitely guaranteed sold out home game against Longwood!);
2) a DRINK FOR FREE ON CASUAL'S TAB during the 4th Annual Casual Extravaganza ("CX4") next season AFTER THE SYRACUSE GAME ON MARCH 9TH which may or may not include special guest stars Allen Iverson and mermaids in a dunk tank;
3) An appearance at the social function of your choice by new Missouri commit Johnathan Williams' AUNT LYNN Aunt Lynn will speak on any topic you'd like for 15 minutes while your guests stare in horror.
4) invaluable shares of Facebook stock;
5) an Orange urinal;
6) the basketball court at the new Georgetown athletic facility to be completed in the year 2080 named in your honor.