The freshly minted 9th ranked Georgetown Hoyas take on the 20th ranked Marquette Golden Eagles in a Big East battle tomorrow night at the Verizon Center, and as usual we're bringing you everything you need to know about Georgetown's next opponent. Special thanks to one of our best blogfriends, good ol' Rubie Q at Anonymous Eagle, your one-stop shop for all of your Marquette hoops needs. Rubie Q, this Miller Lite's for you. When you're done reading this, head on over there to check out our answers to their questions. 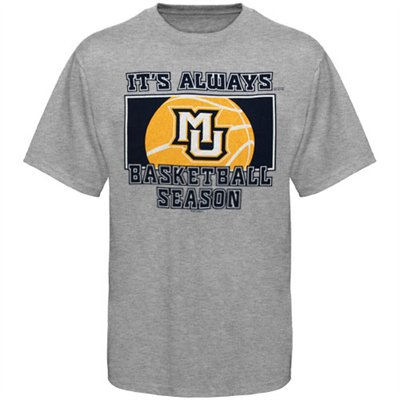 Anyone actually have this shirt? via images.footballfanatics.com

I think you are a swell fellow.

I made you a present. (Casual Note: The gift is at the bottom of the post, and now I feel really bad I I didn't get him anything for Hanukkah)

More fun with Marquette after The Jump:

Just when I thought I had everything in life figured out, last Wednesday night Rutgers decides to beat Florida and Marquette gets thrashed by Vanderbilt. What happened during that game that was so different from every other game Marquette has played this season?

Depends on your perspective, I guess: the glass-half-fullers will say that it was just one of those games -- Marquette couldn't hit anything, while we got a schizophrenic Vandy team on one of its good days. The glass-half-emptiers (OH HAI!) will say that it was the same problems that have haunted Marquette since Chris Otule busted his knee against Washington in early December: we're missing our most important (and tallest) defensive player, so any big man with a pulse is going to give us fits defensively, and Buzz Williams' distressing insistence on double-teaming any time the ball gets into the paint leaves wide-open shooters all over the floor. Vandy's got good bigs and shooters aplenty, so. Yeah. That happened.

Are we talking team -- like the players and coaches -- or fanbase? If it's the former, I'd say it's the UConn Lack of Institutional Controls. If it's the latter, it's Notre Dame by twelve horse lengths; in truth, you should probably create a new category for "most detestable fanbase other than the clown shoes at Our Lady of Perpetual Smugness."

In regards to most likeable, that's a tough one for me. You know I dig the Hoyas, of course, but I've always liked the way Louisville plays ball, and their fans are fantastic -- I've had a soft spot for them since a bunch of UofLers got me piss drunk after Marquette lost to UAB in the Conference USA tournament nine years ago. But, hell, who am I kidding? I'm a creepy old man. It's South Florida.

What are your expectations for this season? Is it Sweet 16 or bust?

Before Otule got injured, I figured 12-6 or 11-7 in the Big East. Now I'm down to 10-8 or 9-9. This conference is a meat-grinder when you're at full strength, and I'm not relishing the thought of playing another conference season without a player taller than 6'9".

I don't put much stock in what happens in the Dance because I think single-elimination tournaments, almost by definition, are a crapshoot. After what we've seen in the last week, I'd take a top-half of the league finish and a Dance invite. I'm too worried to hope for anything more.

Where do you see Marquette finishing in the Big East? Which teams end up in the top 4 and in what order?

Least favorite, aside from his fashion sense? I've already harped on the philosophy on defense, and that's the clear No. 1 in my mind, but the other thing that bugs me is how much transition offense Marquette runs against the cupcakes in the non-conference schedule. Buzz made headlines earlier this year when he said that MU only ran three set plays against Norfolk State (the first time we played 'em) in 40 minutes, but that's not unusual for Marquette in November and December. We know that when we get to the conference season, we're not going to be able to run with reckless abandon against the Georgetowns and WVUs and Syracuses of the world -- and yet it seems like that's all we do against Jacksonville and Mount St. Mary's. I don't get that.

Which junior college phenom is going to come out of nowhere to crush us this time around? Besides Jae Crowder and Darius Johnson-Odom, who do you expect to separate from the pack to become Marquette's third scoring option in late game scenarios?

No JUCOs on the roster other than Jae and DJO this year, which is something of a change from last season's team, where almost half the players were junior-college transfers (Jae, DJO, Buycks, Fulce, Butler). In hindsight, though: all those JUCOs were just Buzz scrambling to balance the recruiting classes after everybody and their brother bailed when Smarmy Tom Crean took his act to Bloomington. Now that he's had time to get his feet under him, Buzz is bringing in high school players almost exclusively.

As for the third scorer: two weeks ago, I would've said Todd Mayo, who's shown some flash in his first two months on campus. But Mayo (understandably, of course) has had his share of freshman moments recently, so I'll pick Davante Gardner, who always seems to be around the ball and has excellent touch from the line for a big fella.

What do you make of conference realignment? Would you have rather the basketball-only schools formed their own super basketball conference?

I've said this before, but when the Big East died, I felt sorta like John Cusack's character in High Fidelity, when his girlfriend tells him she's pregnant but she's going to have an abortion, and he's all: "MY CHILD TOO! Blah blah blah" before realizing it's not really his place to say anything. (Hey, Say Anything! Two Cusack references for the price of one! Where else can you get that kind of production in SWTE?)

In other words: I would be all righteously indignant about what's happened to the Big East, but I'm still trying to figure out how we snagged a spot at this table in the first place. Throw in that I've got this weird Catholic guilt that we're somehow responsible for the fact that the Big East has gone from Miami and VaTech and Boston College and 'Cuse and WVU and Pitt to Houston and SMU and Boise State and Central Florida, and I've just got my fingers crossed that we don't get lost in the wash in this mess.

The basketball-only thing sounds intriguing in theory, but then I stop and think about it: there must be a reason these conferences are tripping over each other to add football teams, and there must be a reason that Marquette and Georgetown and Seton Hall and Providence so readily agreed to add a bunch of schools from Texas and Idaho and California when we had the voting advantage, in terms of basketball schools vs. all-sport schools. I dunno. That footbaw money must be awfully hard to pass up. I don't know if a basketball-only league could survive.

If you were the president of Rubie Q University and your first task was hiring a basketball coach to start your program, which of the Big East coaches do you choose? Who is your last pick?

First pick is a no-brainer: Jay Wright, just so we can go out for fancy steak dinners and people will come up and fawn over how pretty he is and then he can throw me some scraps with the "Hey, haveya met Rubie?" line we practiced beforehand. And I bet he's got awesome tips on cufflinks.

Last pick? Calhoun, because I'd like to have two or three quiet months before the NCAA investigators show up at the gates of Rubie Q U. Plus, I think he's probably a shitty tipper.

You've just received word that you are about to have your last meal in Milwaukee. Where are you going and what are you ordering?

(BTW: it's right across the street from the Bradley Center. We're going when y'all come up in March. Start loosening your waistband now.)

What is your favorite Chris Farley movie?

Tommy Boy is great, of course, but I think Black Sheep is terrifically underrated. I could watch the scene when Busey hoists Farley up and then craters under the weight while saying: "Oh, you're a large American!" all day.

What do you make of Tom Crean's successes at Indiana this year? Is it a positive or negative feeling?

Here's the thing about Crean: he's an asshole. He was an asshole while he was at Marquette, and he's an asshole now. (I mean: look at the face the shithead made after IU hit the three to beat Kentucky earlier this year. What kind of bastard makes that face after his team's biggest win in five years? An asshole, that's who.) Anyway: while he was at Marquette, he was our asshole, and, in truth, it was kinda fun to have a coach who rubbed people the wrong way. Now, though? He's just an asshole -- a tiny, micromanaging, self-promoting asshole.

On balance, I guess I'd say it's a negative feeling.

I feel like when you look at what a player's image is now vs. that of his college, there is no more dumbfounding combination than Dwyane Wade and Marquette. Do you continue to follow his career or are you not much of an NBA guy?

Wait, what the hell was the intro to that question? Was that a transcription of something Kornheiser said on PTI? Am I on TV?

But yeah, I keep tabs on Wade, if only so I can brag about seeing him when nobody knew who he was in 2002, like somebody who saw Pearl Jam in a club when they were Mookie Blaylock.

I could talk to you for hours, Rubie Q.

And I will dutifully paddle this Douche Canoe until we reach the shoreline.

This is why we love Marquette