The Georgetown Hoyas narrowly avoided a bad loss on Saturday by pulling out an ugly 52-50 win over Rutgers. Before we say goodbye to the Scarlet Knights and begin to focus on Pitt, as usual we here at THE GLOBAL PHENOMENON are handing out hardware to those most deserving. Away we go...

The Chris Wright Heart of a Champion Award:
Otto Porter. Porter only had 9 points and 4 rebounds on just 3-7 shooting from the floor, but he came up big when it mattered, scoring Georgetown's final 6 points including the free throws that proved to be the final margin of victory. JT3 said it best after the game: "Otto doesn't get rattled. He just plays the game." Honorable mention: Greg Whittington and Jabril Trawick. On a day when the usually reliable Hollis Thompson, Jason Clark and Henry Sims all struggled, the freshmen kept Georgetown in the game and in a position to win.

The Holy Grail of Zone Busting Award:
Otto Porter running the foul line extended. 6'9 with guard skills, a killer mid-range with a still shaky three point shot -- Otto Porter was put on earth to break to zones. We were treated to this briefly in the second half against St. John's, but against Rutgers it provided the decisive offensive spark. Every time he touches the ball around the foul line, something good ALWAYS happens for Georgetown. Whether it's a quick pull-up jumper, an inside feed to Sims or a kick out, the zone just can't keep. It's the most effective Georgetown offense against the zone since the 2010 Big East Revenge Tour. Enjoy those ridiculous t-shirts commemorating mid-season success while you can, Syracuse.

Shooting Shitshow Award:
The Hoyas shot 3 of 23 in the first half and made just 12 baskets the entire game, matching Harvard for the fewest baskets made in a win this season. NERDS!

The Tim Tebow Award for Sucking for Three Quarters Then Picking It Up for the Last Few Minutes:
Otto Porter and Greg Whittington. Greg couldn't make a lay-up to save his life before scoring a huge 7 straight points around the 10 minute mark. But Greg's Tebowmagic paled in comparison to the great Otto, who, on the way to scoring 9 points all game, notched 7 of our last 8 points. And six points in the last minute and a half. The stream cut out -- can anyone confirm whether or not Otto tebowed at midcourt after the buzzer?

Fire That Intern Award:
ESPN. The worldwide leader runs some cute segment where two teammates get to answer questions about each other. Saturday's contestants were Ashton Gibbs and Tre Woodall of Pitt. Woodall was asked who Gibbs' favorite rapper was, to which Woodall replied "Meek Millz". His answer was correct, unfortunately the poor ESPN intern tasked with writing said answer was unfamiliar with Mr. Millz's work and wrote "Meat Millz". I assume the intern's other favorite rappers include Young Cheesy, M&Ms, and Goudacris.

Promote That Segment Producer Award:
ESPN. That Thomas Robinson piece, my God, it got mighty dusty in my mom's basement after it concluded.

Doug Gottlieb Is The Worst Award:
Doug Gottlieb. The man is a documented blowhard of the Skip Bayless school of assclowns. He decided to chime in on Twitter midway through the Georgetown game to say something along the lines of "It's almost February, of course Georgetown is losing to Rutgers." Doug, outside of Colin Cowherd and Skip Bayless, you are the most useless person on ESPN, congratulations.
The Future Is Bright Award:
Rutgers. Lost in the chaos of Mike Rice making a fool of himself and the fanbase sobbing uncontrollably, the Scarlet Knights played some pretty solid basketball yesterday. With wins over Florida and Connecticut already, and a near win over Georgetown, this is a team no one will want to see for the next two months. Throw in a stellar freshman class and Wally Judge transferring from Kansas State and Rutgers could be a force for the next few years.
The Harbaughs Hate Special Teams Award:
The Harbaugh Brothers. Ouch. Between Billy Cundiff shanking a field goal about as badly as Ray Finkle, and Kyle Williams singlehandedly keeping the 49ers out of the Super Bowl, it was a tough day for the Brothers Harbaugh. Good news is the rest of the world won't be subjected to two weeks of Harbaugh Hand Jobs before the Super Bowl. Instead we'll get to hear Bill Simmons talk about the helmet catch for the 4,000,000th time.

The Verizon Centre Award:
We here at THE GLOBAL PHENOMENON are huge fans of Kate Middleton, so if it was the scoreboard intern's intent to kiss up to the most casual royal by putting up a word she might understand while she was tuning in on ESPN3.com from the Royal Palace in Gloucestershireingham, then we're all for it. 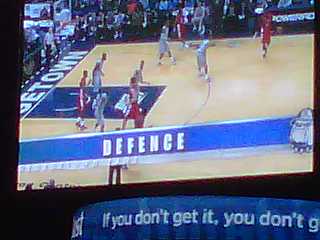 Dickie V Award:
I'm not sure what the deal is with the Big East Network, but it is clearly the place where washed up coaches go to die. Exhibit A is former Rutgers coach Bob Wenzel, who is horrid.

Greatest Day Ever Award:
Hoyas beat Rutgers, hooray! UConn loses to Tennessee, cool! Duke goes down at home to Florida State on a crushing buzzer beater in the face of all of the Cameron Pansies, yes! AND THEN SYRACUSE GETS CRUSHED BY NOTRE DAME!!!! Wow, what a day! Maybe we should celebrate the occasion by making a t-shirt! Just a suggestion, but Duke might want to stop playing games on January 21.

Keep It Up Award:
See what happens when the students show up in droves and make their presence felt in Verizon? Georgetown can beat Rutgers! Good work by the students making it to the game with a wintry mix on the ground, as various chants of Hoya Saxa and the always entertaining "left, right, left right,...sit down!" after some gimp on the opposing team fouls out were clearly audible through the speakers on my 60" television. That's right.

Captain Bar Mitzvah Award:
What was the deal with those sunglasses that some of the Pep Band and students were wearing? And yes, I'm kind of jealous I don't have a pair.

Sack of Crap Newspaper Award:
The Washington Post. Thank you for full boxscores of, among others, the Bulls/Bobcats, Hawks/Cavaliers and FRIDAY'S Timberwolves/Clippers game. But for the NATIONALLY RANKED POWERHOUSE HOYAS we get some kind of modified compressed box score. Remind me again why I am paying $2 for the Sunday paper? Oh right, George Will. Oh, I can get him on line? SUBSCRIPTION CANCELLED. Go rename the damn thing the Ezra Klein Post and fill the paper with charts about income inequality and vegan recipes. I don't care anymore.

Sore Loser Award:
Rutgers fans. Congratulations! You're officially the most delusional whiny bunch of miscreants I've ever run across. Check out the Rutgers Message Board, it's amazing. The fact that you believe that there is an actual conspiracy being perpetrated by the Big East to keep Rutgers down is truly astounding. Come on guys, no one cares enough about you to form a vast conspiracy to hold you back.

Old Balls Award:
Billy Cundiff. I would have probably missed that 32-yarder also, but when I shank an Awards post I can tell you that no one in the Casual Locker Room resembles Ray Lewis, Terrell Suggs, or Ed Reed. Good luck enjoying the offseason, buddy. Honorable mention: The 49ers Kyle Williams. Two muffed punt returns that led directly to 10 of the Giants 20 points? Nice work, good sir.

Thank Goodness for Otto Porter Award:
Casualhoya.com. It would have been a really fun week keeping a nearly suicidal fanbase entertained following a loss to Rutgers and heading into a game against the suddenly basement-dwelling Pitt. Egads.

Rotten Tomatoes Award:
"Extremely Loud and Incredibly Close." This is a perfect movie for those who crave two hours of watching a family drama while being emotionally manipulated against the backdrop of 9/11. Nice work by Tom Hanks and Sandra Bullock netting paychecks in this one. Two thumbs up! And by "up", I mean way fucking down.

Lord Voldemort Award:
Wither Markel Starks? Since being the hero and winning the Chris Wright Heart of a Champion Award in the Louisville game, Starks has been shakier as a floor general than that Italian bird who crashed the cruise liner into rocks.

The next generation has received their Casual swag. Also, it was unclear, but these may be OldHoya’s grandchildren.

This is the offense I feared coming into this season

We’re putting a lot of misses in the bank. based on the first half performance

I have an important question — which goes better with my casual waffles and eggs brunch — jack daniel’s or beer?

This revolting abomination of offensive execution

Is decidedly unlike all prior snowstorm games

About 3 appeared to recognize him. Awful.

i hope the fans are happy

we pay tickets to see the refs officiate the games right?

Save Us, Steven Tyler's Tits!

Worked for Marquette. Worth a shot here.

Is the worst thing to happen to college basketball since Syracuse.

Make us take so many free throws we get tired…

do they say "future burger flippers of canada" when they do cuse games?

Georgetown Basketball has bested me once again