Sleeping with the Enemy: The Scarlet Knights of Rutgers

Share All sharing options for: Sleeping with the Enemy: The Scarlet Knights of Rutgers

TGIF everybody! As the Hoyas get set to host the evil Rutgers Scarlet Knights tomorrow at Verizon, as usual we here at THE GLOBAL PHENOMENON are bringing you everything you need to know about Georgetown's next opponent. Special thanks on this glorious Friday to On the Banks, your ultimate source for all things Scarlet Knights, for providing the answers to our hard-hitting questions. On the Banks, this Miller Lite is for you. For some Casual Answers to Rutgers questions, check this out. 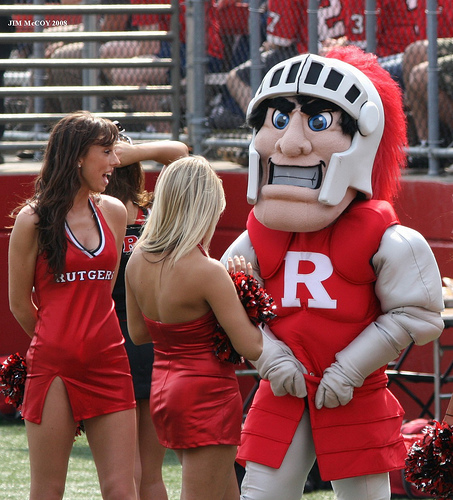 How excited are you for the Mike Rice era? How would you rate his performance thus far on a scale of 1-10?

I am extremely excited for the Mike Rice era. It's gotten off to a great start so far. He's recruited better than any coach I've seen at Rutgers, he has the team playing tough. Last year they played some great organized offensive basketball and some tenacious defense. This year, the team seems like it's finally starting to buy in. His performance thus far is an 8 (10 means NCAA Tournament.)

More fun with Rutgers after The Jump:

Do you believe Rutgers has the best freshman class in the Big East? Tell me why.

Is it the best freshman class in the Big East? No, that probably goes to UConn. But this class is talented. The guards are quick and can put the ball in the basket. The big men appear to have talent but are going to need some time to mature. Very excited for the future.

What's with all the court rushing? Maybe I am just bitter because I was at the February 2010 game, but it feels like for you guys to start considering yourselves legitimate Big East competitors, every victory over a top 15 team can't be followed by a court rushing. 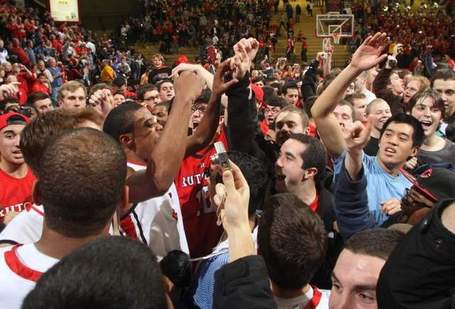 We beat Florida! via cmsimg.mycentraljersey.com

As far as I can tell, RU has only rushed the court twice in my time having season tickets (ten years) was last year in that last minute win against Villanova and this year against Florida. Both were shocking, rollicking wins, and after all RU has been through, the fans deserved to storm the court. In fact, I looked back to the ugly Fred Hill era and the court was not stormed when RU upset G'Town in 2010. Going forward, though, unless Rutgers beats a top 5 team, I doubt the court will continue to be stormed.

Best case? A miracle finish and the NCAAs. Worst case? I could see them winning only one or two more games, and fans starting to panic a bit. This team is such a roller coaster that either could happen, but it's likely the team goes 8-10 in the BE. Something like that.

When all is said and done, who do you think the top 4 teams in the Big East are? Who is the next best team behind Syracuse?

Syracuse, Georgetown and Cincy seem to be the big 3 right now and in that order. I was going to lump SHU in, but they just lost to Villanova, so I'm not sure beyond that. Yes, that's a copout answer, but it's the one I have right now.

How big would a season sweep of Seton Hall be? Do you believe it is "the best rivalry in college hoops" as some pundits have called it?

A sweep of SHU would be great and another step forward for the program. It's not the best rivalry in college hoops, no, but for the fans, it's a damn entertaining one. And if both of the teams ever get good in the same year it's going to be crazy.

It's your last meal in New Brunswick, NJ. Where are you going and what are you ordering? 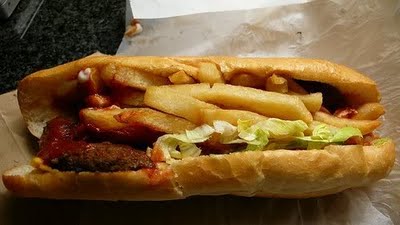 Most would go to the Grease Trucks for a fat sandwich, but not me. I'm heading to Stuff Yer Face for a Fireman's boli (pepperoni, onions, peppers, cappicola, mozzerella and marinara) and a nice craft beer.

Who are the team's best scorers and rebounders? Which unheralded player is going to come out of nowhere to break Georgetown's heart?

Eli Carter has been a stud freshman. He scored 31 against Florida and has been averaging double digits throughout the Big East season. He can get to the hoop and he can shoot the three which really makes him dangerous. Myles Mack, the small point guard off the bench has been clutch for RU as well. Dane Miller and Gilvydas Biruta have been our best rebounders, and when Dane is playing with energy, Rutgers is a tough out. But the player I'd pick to break some hearts would be sophomore swingman Mike Poole. He's been pretty deadly from the elbow the last few games.

What do you think when you see Mike Rosario getting limited minutes at Florida? Do you harbor bad feelings towards him or is it water under the bridge?

Rosario transferring helped usher in Mike Rice, so I'm gonna let him go. But I'm not surprised to see him riding the pine at Florida. And I'm not too upset about it either.

If this were at the RAC, I'd give RU a pretty good shot. But since it's a Saturday afternoon on the road... I'll say Georgetown by twelve. Rutgers stays within 5 or 6 most of the game, then loses out on Free throws. Let's say... 72-60