The Casual Awards: Down Goes DePaul!

Share All sharing options for: The Casual Awards: Down Goes DePaul!

Your Georgetown fighting Hoyas sauntered into a a snowy Windy City and took care of business against the DePaul Blue Demons to improve to a surprisingly awesome 15-3 overall and 5-2 in the Big East. Before we here at THE GLOBAL PHENOMENON turn our focus to Rutgers, we're handing out some hardware to those most deserving. Away we go...

The Chris Wright Heart of a Champion Award:
Jason Clark. A career-best 31 points for my man JC, who was 11-14 from the field (4-7 from three), and added 5 rebounds and 4 steals for good measure. Clark, who has been positively nasty in transition this season, has guided the Hoyas to a top 10 national ranking and is a legitimate All Big East 1st Team selection and on the short list for Big East Player of the Year.

Internet Thing That I Don't Understand Nor Care About That Is Stupid Award:
SOPA/PIPA crap. How the hell did I not have internet for a whole day yet receive emails every hour telling me to sign and not sign petitions. I don't even what all this yelling is about. Just don't screw up my internet again, there are billions of Hoyas waiting eagerly in their mothers' basements for these awards to post.

I May Hate DePaul Award:
DePaul. Was it just me or was that team incredibly annoying and pest-like last night? They were flopping all over the place, committing hard fouls, and whining to the refs. They reminded me of a bottom-feeder version of Duke. Must be a "Blue" thang.

If You Think The Hoyas Have it Bad at Verizon Award:
AllState Arena. 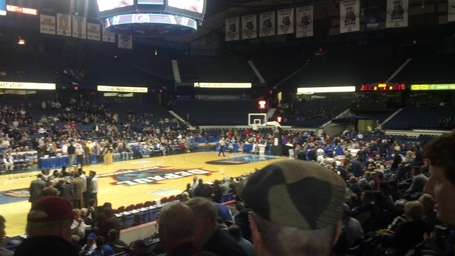 What's In Your Wallet Award:
Big ups to DePaul's Brandon Young, who miraculously banked in an ill-advised three right before the half to cut Georgetown's lead to 37-31 and give the Demons some momentum heading into the 2nd. The Demons scored the first two baskets of the 2nd half to cut Georgetown's lead to just one, but however commenced their usual sucking and lost.

Otto Porter Award for Filling the Boxscore:
Slowly but surely, Nate Lubick is starting to do all the things that make him Nate Lubick. Thundersnow had 4 points, 7 rebounds, and 6 assists last night.

Dickie V Award:
LaPhonso Ellis. Despite calling our game against Marquette just a week ago, The Phonze seemingly knew absolutely nothing about Georgetown, as evidenced by comments like "it's uncharacteristic for Georgetown to have this many turnovers". On top of that, he referenced his utterly forgettable college basketball career over 10 times as if he were the predecessor to Tyler Hansbrough. I never want to see him again unless he is with his usual sidekick Adam Amir, AKA The White Gus Johnson. 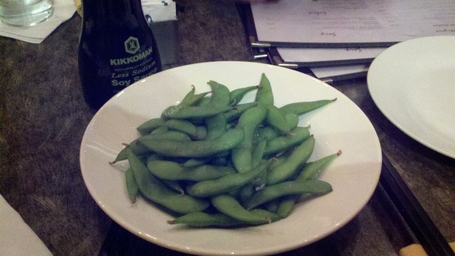 Knock Them To The Ground Award:
Georgetown. How in the hell did that dude on DePaul get away with throwing the ball off Nate Lubick's back, embarrassing him for a layup, and then not get knocked to the damn floor? I expect more from you Mssrs. Trawick and Whittington.

Cool Play That I Wish Georgetown Had Pulled Off Award:
How in the hell does Georgetown never pull off throwing the ball off someone's back, embarrassing them for a layup, and then not get knocked to the damn floor?

Fundamentals Award:
Georgetown shot a woeful 57% from the free throw line against DePaul, missing 12 FTs in a game that all of the stats pointed to being a blowout. Couple that with a whopping 18 turnovers and there's a recipe for an upset. Thank goodness we were playing DePaul. Incidentally, turnovers have been a big problem for Georgetown teams in the recent past, and in breaking news, water is wet.

Is That Stat For Real Award:
Otto Porter. Did Otto really rebound the ball only 3 fewer times than DePaul's ENTIRE TEAM? Wow. I have no further questions, your honor.

Ownership Award:
The Hoyas have won 11 straight against DePaul and lead the overall series 20-6.

Get Well Soon Award:
Markel Starks. Without the future congressman, the Hoyas only have two mildly capable ballhandlers against a press. This can work against the likes of DePaul, but will absolutely not work against teams that win more than 1 Big East conference game a year. Good news is it sounds like it was a standard stomach bug for Starks, so I assume he should be good to go for Saturday's game.

Freshman Senior award:
Otto Porter. Porter earned his first career start with Starks mysteriously AWOL and played a whopping 35 minutes, good for 3rd most on the team. He also led the team with 5 turnovers and shot just 20% from the field, but that's fine.

Eight Dudes, One Idea:
Eight friends with school spirit but only six letters in your school name? NOT A PROBLEM. Add two exclamation points to the end and find the most desolate area of the arena to stand. Kudos to these chest painted gents, without them, the overall attendance would have been 25% less. 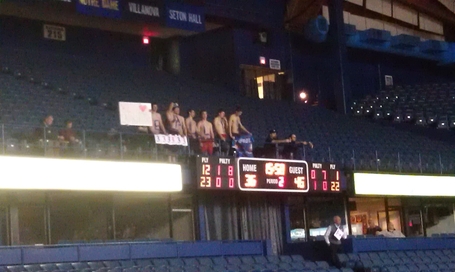 Arena Official: I am sorry sir, tickets are no longer being sold to the game.

Georgetown Fan: Really?! Come on man, I drove all the way from downtown for this game. You know what, I am just going to walk in. Ok?

Arena Official: Sir! No, you can't, well, alright whatever. Go in.

Microeconomics 101 Award:
This documentation blows but you try taking a picture when it is 15 degrees outside and snowing. Anyway, AllState arena is situated next to a Target. Literally across the street from the store. Parking at AllState Arena is $13 for an event, but parking at Target is free. It is actually a closer walk to the arena from Target than it is from the AllState parking lot. Yet, someway somehow there was a line to enter the AllState parking area, and ample spots available 50 feet away from the arena entrance. I just guess people in the Midwest are too honest. 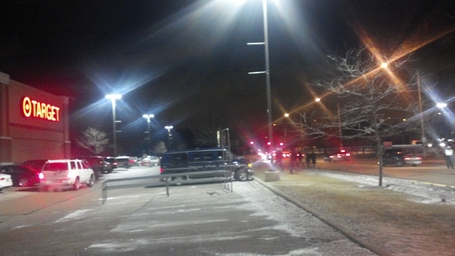 Chamber of Secrets Award:
Georgetown's Sports Information Department. I love The Washington Post's Tarik El Bashir like a brother (we are both Italian) and I know that his investigative reporting efforts are top-notch, so it's really odd that Georgetown can actually pull off the whole "Hey, our starting point guard is dressed but isn't starting tonight and no one knows why but us and we haven't told anyone and you'll only know once we tell you" thing. Georgetown=The Kremlin.

Brandon Bowman Memorial Award:
Jason Clark. The line in this game opened at Hoyas -8, so those who got in at that number were lucky enough to earn a push. However, most degenerate gamblers out there reluctantly pulled the trigger on Hoyas -9, a wager that still seemed OK until Mr. Clark stepped to the line in the final seconds with the Hoyas up by 7 and only made one of two. Worth noting that Clark blew the cover in the Marquette game doing the exact same thing. Also worth noting that Clark single-handedly won Georgetown both of those games, so it's fine for him to keep doing what he's doing. I guess.

Take Care Of Business Award:
Georgetown. The next two games are against perennial bottom feeder Rutgers and winless Pitt. These games MUST be won before things get real serious as Georgetown embarks on a UConn, USF, Syracuse trifecta. Focus boys, focus.

are we committing to the point forward scheme?

Points off an inbounds play!

What is this strange and marvelous concept?

these are such awful turnovers

Has a training regimen of sausage and beer. Yikes

Our defense has been pretty good

Damn these are some expensive throws...