Better late than never, right? While the THUNDERTRAIN chugs through the beautiful state of New Jersey, we here at the GLOBAL PHENOMENON are providing you with everything you need to know about the Hoyas' next opponent: The Mighty Red Storm of St. John's. Special thanks to Pico over at Rumble In The Garden, the grandest St. John's blog of them all. Pico, this Bud Light is for you. 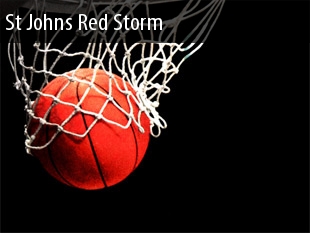 How is Steve Lavin doing? Any idea when he will be back on the bench?

Lavin is recuperating from his prostate cancer surgery. He tried to make a comeback, but found his energy levels weren't where he wanted to be for day-to-day coaching and sideline work. He's still out recruiting, but the game coaching goes to his right hand man, Mike Dunlap. He told the LA Times that he might not be back this season... so maybe in February if at all this season. It'd be nice to see him back on the sidelines, but he will return by next year.

Realistic best case: the NIT and around a .500 record in Big East play.

Worst case: the team wins 1-2 games the rest of the season.

Tell us what happened to the stellar recruiting class that Lavin brought in this year. There was a lot of different information to follow.

Three players didn't pass NCAA's eligibility requirements in core courses, tried to take summer classes, but their grades weren't accepted by the NCAA. So all three went to school to try and get their grades correct... one finished in a semester (Amir Garrett), and two opened their commitment and will also take a year to finish what classes they need.

After the season started, Nurideen Lindsey decided that he didn't want to play for the Red Storm - he bristled under some of what he was asked to do (basically, learn the point guard spot) and felt that he came to play for Steve Lavin, not Mike Dunlap. So he left.

Those two are still of interest to St. John's. JaKarr Sampson has a chance of returning; I'd bet against seeing Norvel Pelle.

How good is Mo Harkless? Do you think he will steal the Big East Freshman of the Year from Andre Drummond?

Right now, I think D`Angelo Harrison has a real shot at Freshman of the Year over Harkless, Drummond, Porter, and others. He's consistent, effective, impactful, can score and pass, and is at the heart of St. John's recent wins.

Best scorers are Harrison and Maurice Harkless, along with God`sgift Achiuwa against smaller/ slower teams. The best rebounder is Harkless; other than him, the rebounding is fairly underwhelming. Of course, the team has SF's playing at center, so they might be better rebounding their position.

None of the players have been wildly disappointing; they're freshmen, and they struggle to shoot and to balance aggressiveness with caution.

What do you make of this conference realignment? Promise me that we'll stick together through thick and thin. Promise me.

I promise. St. John's doesn't have anywhere else to go; and the Red Storm fans respect the history and tradition. The conference realignment is tough to watch, and not having Pitt and Cuse and that school with the beards and guns will be unfortunate. Why couldn't they have taken Rutgers and UConn?

Who ends up being the top 4 teams in the Big East when all is said and done?

I think Georgetown? Seton Hall? And Connecticut. UConn is the only one I say with any confidence, and I think Louisville will be there.

Last choice - Jim Calhoun. Too abrasive, too many violations. Fine coach, but he's not a rebuilder at this point.

St. John's has a great basketball tradition, both for basketball playing and for having some wild personalities. If you had to come up with your top 5 St. John's players to go out and party with for a night, who is making that cut?

Quinn: If I had to give you a few, I'd say Erick Barkley, Lamont Hamilton, Bootsy Thornton, and Paris Horne. I'll leave out Curtis Johnson, Abe Keita, Avery Patterson, and Ricky Torres.

Tim: Mark Jackson just to watch him eat a whole box of cornflakes for breakfast and two burgers before the game. (his game day meals)

Does DJ Kennedy's injury in the Big East Tournament last year haunt you? How far could that team have gone had he not been hurt?

I really would have just liked for him to play on the big stage and show his range of skills. I don't think St. John's would have gone farther than the second round, and Gonzaga's height would have bothered the Johnnies anyway...

It's your last meal in Queens, NY. Where are you going and what are you ordering?

I'd eat some beef patty and coco bread or jerk chicken from one of the Jamaican spots in southeast Queens. Our writer Tim suggests Double J's or Halal outside Gate 4 at Carnesecca.

I might just have a slice for my last meal... or go to Brooklyn.

How do you see this game playing out? What will the final score be?

I think the Hoyas' height will be difficult on the Red Storm, and if G'Town doesn't turn the ball over, they have the game by 6-7.