Share All sharing options for: Georgetown Hoyas Pulled From Court In China After Benches Clear and Bottles Thrown 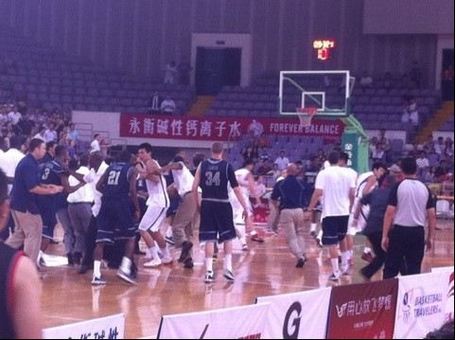 So much for diplomacy... (via @niubball)

We'll have more on this as information from Red China escapes, but what we do know from the Washington Post's Gene Wang is that in the 4th quarter of a tight game against one of China's better teams, John Thompson III pulled the Hoyas off the court after benches cleared and fans apparently began to throw bottles at them.

Here are some grainy pictures of the incident.

What we know so far (via HoyaTalk):

Seems to me that the Chinese were slightly embarrassed their military team was losing to a bunch of American college students.