Share All sharing options for: Casual Headbands Summer Series: Keeping It Casual WITH CHICKS in Croatia!!!

That's right GLOBAL PHENOMENON fans, it appears there are actually chicks in foreign lands out there who dig headbands! This entry in the contest of all contests comes straight at you from the #1 club in Dubrovnik, Croatia! 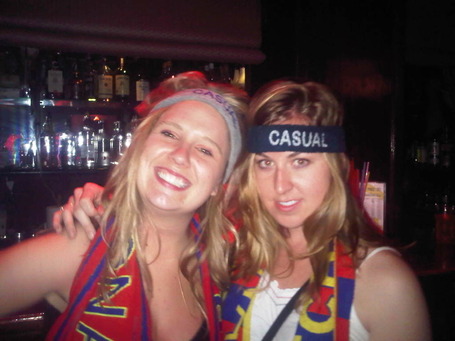 This picture was taken during the Manchester United - Barcelona Champions League Final that was dominated by the Barcelona side which features soccer great (but non-chick) Lionel Messi!

For those that don't have Swag (crushing demand has new stash on back order), you can still enter by simply documenting a printed out front page of THE GLOBAL PHENOMENON.

Send the documentation to us at casualhoya@gmail.com and you'll be entered in the Tournament to determine Casual Headbands Supremacy in 2011! And be sure to vote in the Casual Poll below, as the seedings for the Casual Headbands Bracket of Upside will be determined by which entries are certified Casual!