"Do you come from a land down under?
Where women glow and men plunder?
Can't you hear, can't you hear the thunder?
You better run, you better take cover."

G'day mates! Today's entry in the contest that might single-handedly end the NFL lockout comes to us from the land down under and majestic Ayers Rock! 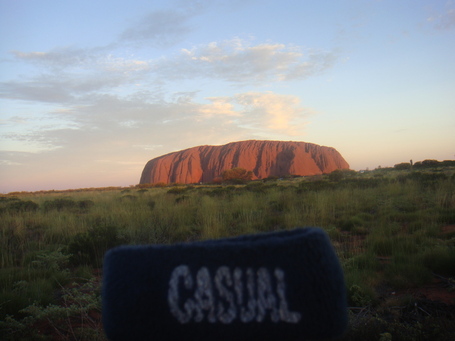 We didn't land on Ayers rock! Ayers rock landed on us!

More documentation after The Jump:

To learn more about Ayers rock, let's hit the wikis!

Uluru, also known as Ayers Rock, is a large sandstone rock formation in the southern part of the Northern Territory, central Australia. It lies 335 km (208 mi) south west of the nearest large town, Alice Springs; 450 km (280 mi) by road. Kata Tjuta and Uluru are the two major features of the Uluṟu-Kata Tjuṯa National Park. Uluru is sacred to the Aṉangu, the Aboriginal people of the area. The area around the formation is home to a plethora of springs, waterholes, rock caves and ancient paintings. Uluru is listed as a World Heritage Site. 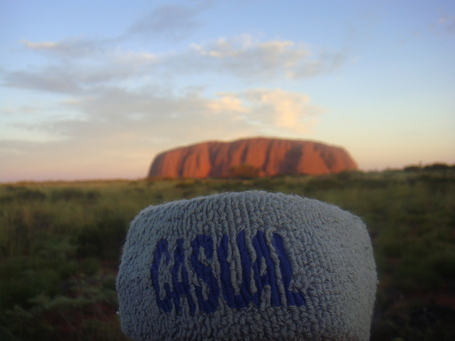 Extra points for shaping the headband into the formation of The Rock.

For those that don't have Swag (crushing demand has new stash on back order), you can still enter by simply documenting a printed out front page of THE GLOBAL PHENOMENON. Send the documentation to us at casualhoya@gmail.com and you'll be entered in the Tournament to determine Casual Headbands Supremacy in 2011! And be sure to vote in the Casual Poll below, as the seedings for the Casual Headbands Bracket of Upside will be determined by which entries are certified Casual!