What a delight walk into McDonough Gym and find that it's THUNDERSNOWING!  This almost made up for my missing the epic U.S Women's soccer team victory over the evil Brazilians to watch kids play basketball while questioning my purpose in life.  But that's my problem.  Onto the games...

It's good to have Nate "Thundersnow" Lubick back; he brings a healthy dose of Big East reality to the Kenner fantasy world of dunks, fast breaks and thunderous blocks. He's one of the few people that looks for contact every play, on both sides of the court. He was up against something of a Patriot League version of himself, a power forward from American, and he immediately proved why he's probably the best back to the basket post threat the Hoyas have. He made a number of very good passes to cutters in the lane and shooters on the perimeter ("shooters" deserve scare quotes for our guards this summer, but more on that later). The big change in his game was obvious from warmups: Lubick's three point shot! Somehow, he ironed out the painful hitch in his shot and it seems to be going in with a high frequency. He drained the only three he took during the game and made them at a good clip in warm-ups.

Day 4 Recap after The Jump:

Along with a new look jumper, Nate also displayed a new willingness to lead the fast break, with less success. Twice he ignored the outlet pass and charged down the court himself (once after making a nice steal under that basket that broke up what would've been an easy dunk for Sims) and both times inside the three point line he completely lost the handle (though, true to Lubick's luck, both fumbles went directly into the hands of a teammate for a layup). And strangely, despite a productive first half where he scored 8 points and made every shot he took, he didn't have a single attempt from the field in the second half.

Aside from Nate's appearance, the real treat of this game was a pair of Hoya on Hoya match-ups: Markel Starks-Aaron Bowen and Henry Sims checking Jeff Green. It's always in nice in Kenner to at least know that our guys are facing Big East competition. Markel asserted his dominance offensively quickly by gathering a head of steam bringing the ball up the floor and cruising by Aaron for a lay-in. On the next possession, Starks took it into the lane and drew a foul on Bowen. There seems to be a marked improvement in Starks ability to probe into the lane without getting himself caught below the hoops – there's far more finesse, as opposed the bullish Jabril Trawick. As much as anything else, the first half of the match-up was marked by poor shooting. Bowen's pull up from any distance is just not falling, he started the game 2-10 overall, and, as FLHoya pointed out, despite the good 2 pt. shooting percentages Bowen is posting, they are wildly inflated by dunks and layups.

A bit more on Markel: I was again impressed with his ability pull off some high-difficulty moves: sprinting down the court at full speed only to compose himself in a few steps and casually flip in a lay-up before the taller defender has a chance to contest the shot, and, my personal favorite, when he sliced through the lane then bounced out to the short corner and put up a pump fake that sent two defenders flying past him, then calmly drained the ten footer. But he struggled mightily from outside as well, missing his first five treys before hitting his last – when he's missing he seems to push his three point attempts. Interestingly, he dead on from a step inside the arc, showcasing a couple of pull-ups from that distance. He only had a few assists (that was deflated a bit by the poor shooting of his teammates), but I did notice that fairly frequently his entry passes were being batted away. In Kenner, it's hard to tell if the offensive player is at fault, but sometimes, especially when he threw a low pass to Henry, it was clear his looks could've been better placed. But that said, he plays with great control and confidence and had a very strong second half with 14 13 points to pull the game even (in the biggest reffing fiasco of KL to date, a player, not Markel, fouled the offensive player as he was going to the ground. The call went against the offensive player and, after some deliberation, it was decided that Markel had been fouled and that he would shoot FTs. After, Markel made a FT, it was noticed by a ref that he had blood on his hand, so he went to get that bandaged quickly and he returned, only to be told he had blood on his shorts. So he ran to the sideline again, put another pair of shorts over his shorts – yes, wearing two pairs now – and tried to return to play. By now, the refs had decided to let someone else shoot – also not fouled – and apparently decided to erase Markel's free throw. But that adjustment wasn't made until a few minutes later when Markel made two free throws (legitimately) but they only gave him one point on the scoreboard. Got it? Good. Kenner League does not adhere to reason or logic of any kind).

Henry's match-up with Jeff was interesting because a face up four is actually the type of player Henry is most suited to defend, so he had the crowd continually pulling for him to shut down Jeff. Unfortunately for Hank, Jeff looked good today, making an assortment of contested jump shots, but Henry was able to claim his share of victories, a few times thwarting Jeff's attempt to drive into the lane. He also had a great help block from behind on Bowen who was streaking in for an easy layup. On the other side of the ball, Jeff outmuscled Henry, who really didn't attempt any post moves at all until an impressive reverse in the closing minutes. Hank even looked a little intimidated into passing up the mid-range jumpers that he'd been hitting so far in Kenner.

In an evenly matched game, it was Jeff Green's threes that pushed Clyde's back ahead after Starks drew DCX even – but it was an incredible hustle play by Aaron that sealed the game. Jeff missed a one-and-one in the closing minute, and Aaron swooped and for a put back dunk off the free throw that put the game out of reach.

Kenner League at its best provides some hint to the range of a player's potential; the problem with Clark is that all indications are that the he'll rarely do anything outside of what he's shown in the last three years. He did, however, feature a nice pull-back long jumper, and I overheard Rich Chvotkin saying that he's never seen that move from Clark. So there's that... 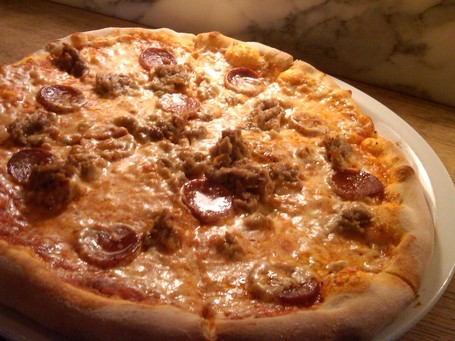 Sorry folks, had dinner plans and couldn't stick around. There's always next week at The Kenner League!