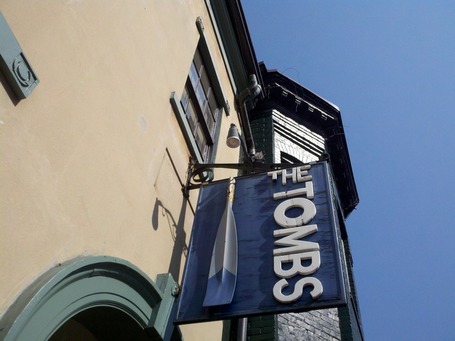 There is lots of crew memorabilia in The Tombs

With the NBA Finals, Stanley Cup Finals, the French Open, and Blake Lively nude pics occupying front page headlines, you likely have overlooked the fact that the Georgetown Hoyas crew team is competing for the 2011 Intercollegiate Rowing Association Championships this week.  Georgetown is one of just 18 schools that have qualified to compete in the prestigious event, which takes place today through Saturday in picturesque Cherry Hill, NJ.

I don't pretend to know the first thing about crew, but thankfully we here at THE GLOBAL PHENOMENON are blessed with having a diverse audience of readers. One such reader, hoyagoon, was a member of the crew squad back in his time on the Hilltop, and has these thoughts to share on what it means to be part of the crew team at Georgetown.  This is a worth a read, and not just because Bradley Cooper was on the team.

Georgetown Crew after The Jump:

At some point early in your Freshman year at Georgetown it happened to you as well.  You were walking across Red Square, probably late to a class, during the first weeks of the year, when a tall and unusually fit man - or woman - approached you and said that "you'd be perfect for crew."

Rowing is one of those quintessential, East Coast, private-school sports.  Watch any movie/television show that is set in or around a major university on in the DC-Philadelphia-New Jersey-New England corridor, and you can be assured there will be some stock footage of a crew team at practice on the river.  Hell, crew practice makes an appearance in both The Exorcist and The Exorcist, Part III.  No other sport so quickly and completely encapsulates the ethos of elite East Coast educational institutions like crew.  And it's not just because rowers tend to be upper class white guys that, while athletic, don't have any skills that translate "real" sports.

For a majority of Georgetown students, those who come from the New Jersey-New York-New England corridor, there is already at least passing familiarity with rowing and crew teams long before they step on campus.  If they weren't previously interested in rowing, these students are able to easily ignore the early-fall recruiting efforts of the crew team because they have some inkling of what's involved.  If, however, you grew up in Iowa and had never seen an actual racing shell before, you might be intrigued; you might even decide to give it a try, figuring it can't be that difficult if the juniors and seniors pitching the virtues of crew to you are so eager to have someone who's never been in a racing shell join.  You figure that after ten years of competitive swimming, including early morning practices in the dead of a Midwestern winter, that there is no way rowing can possibly demand more effort and sacrifice and will probably be a "fun" diversion and a way to meet people.  In other words, you have no idea what you've just signed on for.

Two things become quickly apparent.  First, being the "perfect" size for crew really means you are of an above average height - or below average in the case of coxswains - and appear to have at least some athleticism.  Second, the casting-call approach to recruitment is necessary because an overwhelming majority of those that try out of the crew team won't have the interest or dedication needed.  This is no fault of those that don't, because the dedication required is awesome.  It means signing on to a sport that has a year-round season, and practices accordingly. It means 2.5 hours of practice in the morning, rain or shine, followed by weight-lifting in the afternoon. It means staying in when your friends head to Winston's on Tuesdays, the Cross/Champs on Wednesdays, Chadwick's on Thursdays and the Wave House party on Fridays - and how old do I have to be to make those references - so that you can get up at 5 am for practice the next morning. It means dragging yourself down to the boathouse in the cold of January and February for "dry land" practices, practices that make you long to be back on the water more than any desire you've ever had.  It means countless hours spent on the erg, a device so evil that Satan himself has said that it "is a bit too much of a punishment for even me." It means running the Exorcist Steps for thirty solid minutes after your practice has ended, hoping that the light rain doesn't make the steps too slippery.  It means blistering your hands on the oars so badly it looks like you're a railroad worker.  It means foregoing a typical Spring Break in places like Cancun, Cozumel and Jamaica and engaging in activities that cannot be mentioned in a family-friendly blog such as this one so that, instead, you can attend "crew camp" in Tampa and spend the better part of 6-7 hours of the day on the water in a series of seemingly never-ending practices.  It means giving up your Easter Break to travel to Ithaca, NY for a race that takes place on a day where the high temperature was 40 degrees and you're wearing nothing more than uncomfortably small shorts and a t-shirt.  It means spending hours upon hours sitting on a hard, uncomfortable seat in a boat 2 feet wide with seven other men/women who all must move as one in perfect synchronization .  It means dedicating yourself to being part of a team.

Which is not to say that it is not also a hell of a lot of fun.  Some of my best friends from Georgetown were and remain the guys in my "eight" as well as others on the team.  The hours spent together and the shared sacrifices make for an incredibly tight-knit group of people.  You also, apparently, can meet celebrities:  Bradley Cooper was on the varsity crew team the year I rowed.  And there is something incredibly exhilarating when you're racing down the river, all eight guys locked-in on each other and moving with perfect synchronization and a graceful rhythm.  Winning the shirt of your opponents' in head-to-head races is both illustrative of the sense of sportsmanship that permeates the sport as well as a welcome validation for all the hours spent to put you in that position.

In the end, I only rowed my freshmen year.  Like a lot of guys on the novice team, I understood the dedication and commitment required to be a varsity rower, and I found myself wanting to sleep-in weekday mornings and go out weekday nights.  I wanted to be a "normal" college student, something completely understandable.  But I was always aware of, and in awe of, the sacrifice and dedication being made by the guys and girls down on the river.

Good luck to the Hoyas at the IRA National Championship!