Another grueling summer work week is nearly over, and what better way to unwind and cool down than with a motherloving glass of Kentucky bourbon. For this week's entry in the contest that has redefined contests, we are taking a trip to Kentucky!

Welcome to scenic Versailles, Kentucky, the home of the Woodford Reserve Distillery, where barrel upon barrel of one of the best fluids on Earth are given life. 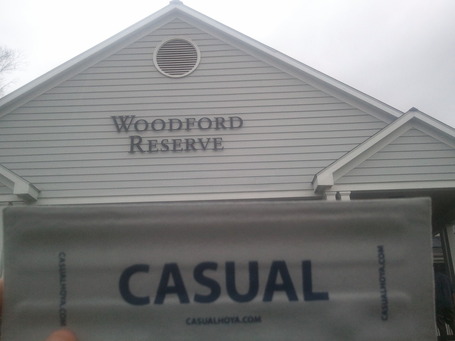 The Home of The World's Sweetest Nectar
Usually I get confused about the difference between whiskey and bourbon, so let's see what the wikis have to say!

Bourbon is a type of American whiskey - a barrel-aged distilled spirit made primarily from corn. The name of the spirit derives from its historical association with an area known as Old Bourbon, around what is now Bourbon County, Kentucky (which, in turn, was named after the French House of Bourbon royal family). It has been produced since the 18th century. While it may be made anywhere in the United States, it is strongly associated with Kentucky. 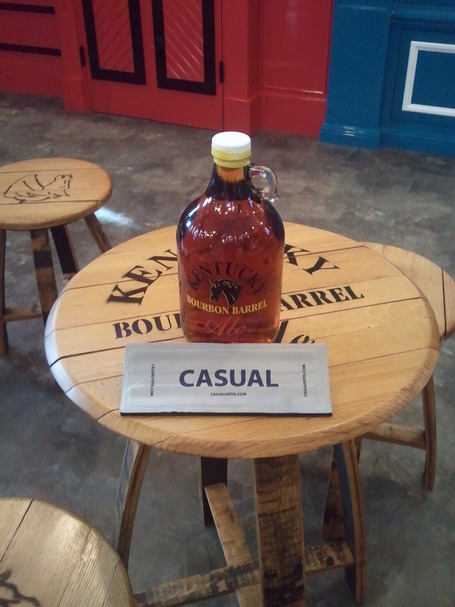 Casual Bourbon Barrel Ale!
Kentucky Bourbon Barrel Ale is a beer aged in bourbon barrels for 6 weeks until it reaches 8-9% alcohol and the taste differs significantly from barrel to barrel. That growler resting comfortably on the wooden chair above was consumed in about 3 hours. (Note: I can't tell if the object on that other chair is a squirrel or a frog and could use some help.) 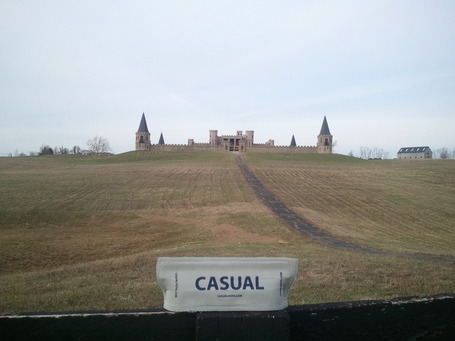 The Casual castle above was where the provider of this entry stayed while on the Kentucky Bourbon Trail #FTW.

As a reminder, take your Casual swag with you on your summer vacations and document the swag in front of casual landmarks wherever you may be. Send the documentation to us at casualhoya@gmail.com and you'll be entered in the Tournament to determine Casual Headbands Supremacy in 2011. And be sure to vote in the Casual Poll, as the seedings for the Casual Headbands Bracket of Upside will be determined by which entries are certified Casual!