A pair of Hoyas won the Big East Beer Pong War this past Saturday at Duke's in New York City.  The team, aptly-named Patrick Ewing's Sweat Band, dominated the field by going an unprecedented 5-0 in a double elimination tournament. 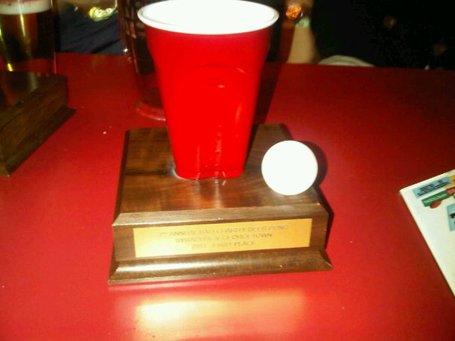 (More details after the Jump)

Here is a first-hand account from the winning team:

We went 5-0 on the day. The 2nd game went into double overtime with my teammate hitting the cups to bring us into overtime and to win the game (I was hitting a bit of a cold spell at this point). That game was played with Hoegarden because the bar ran out of half of their beers on tap. We won the third and fourth games pretty solidly.

The 5th game was to win the winner's bracket - it was a double elimination tournament. We were playing a Georgetown team and were ahead by a cup for most of the game. We had two cups left and I hit one, my teammate hit the other. We brought it back so if either of us hit another cup they wouldn't get rebuttal. I hit the last cup to send us into the championship game.

A Syracuse team won the loser's bracket, but we didnt get to play the last game because Duke's kicked us out. The tournament was only supposed to be 2-6pm and it was already 7pm (Casual Note: illustrative of poor organization skills of Cuse alums).  We were declared the champions.

I then proceeded to call my mom and tell her she bred a winner.

Congrats to the winners.  Way to make your school proud.  Hoya Saxa!