Former Georgetown assistant coach Sydney Johnson was named the head coach at Fairfield yesterday.  Johnson, who went 22-9 and 25-7 in his last two years as the head coach of Princeton, led the Tigers to the NCAA Tournament this year where the Tigers lost in a valiant effort to Kentucky, 59-57 in the first round. 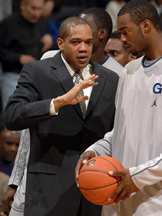 Johnson in his Georgetown days.  via www.princeton.edu

Johnson was named an assistant on JT3's staff in 2004, and during his tenure at Georgetown he helped coach the team to an overall 72-30 record over three seasons.  Johnson was on Georgetown's bench during the memorable run in 2007 for the Big East regular season championship, the Big East Men's Tournament championship, and the trip to the Final Four.  After the 2007 season, he was named as the head coach at Princeton. Johnson takes over a Fairfield team that went 25-8, 15-3 in the MAAC under former coach Ed Cooley, who took the Providence job.

But what does it all mean after The Jump:

Since the departure of Pete Carril, Princeton has only hired individuals who are part of the Princeton family as head coach, jumping from Carril assistant Bill Carmody to JTIII to Joe Scott and then to Johnson.  Current Hoyas assistant Mike Brennan certainly fits the mold.  Per Brennan's bio page:

Brennan, who replaces Robert Burke, comes to Georgetown after serving as an assistant coach for seven seasons at Princeton University and more recently, two seasons at American University. While at American, Brennan helped lead the Eagles to two Patriot League Championships and subsequent NCAA tournament appearances under Head Coach Jeff Jones. During his tenure at Princeton, he helped lead the Tigers to three Ivy League titles. He also spent one year as a volunteer assistant coach at Columbia University.

Brennan was a four-year starter as an undergrad at Princeton under legendary head coach Peter J. Carril, leading his team to Ivy League championships and the NCAA Tournament in 1991 and 1992. He was named Second Team All-Ivy League in 1994. Brennan played professionally in the European Basketball League for teams in Germany, Belgium and Portugal.

It would seem that Brennan is the most logical choice for Princeton should the University choose to continue its trend of naming head coaches that have Princeton ties.  I'll even go so far as to say that I'd be surprised if Brennan doesn't get the job, assuming he still wants it.   Indeed, in 2007 when Johnson was hired, he beat out a field of individuals which included Brennan.

All of this only serves to beg the question: Is Mike Brennan going to be the next head coach at Princeton?  And if so, who does John Thompson look to to replace Brennan with on the bench?