Sunday afternoon, I attended the 38th annual Capital Classic High School All Star Game to see two 2011 Georgetown Recruits, Greg Whittington and Mikael Hopkins. The game was all the way out in Upper Marlboro, MD about an hour away from my home in Bethesda. The event took place in the Show Place Arena, basically it's more for horse shows than basketball games so the stands were further back from the court than in a normal basketball arena. The location of the arena and the declining prestige of the the game meant a sparse crowd. I've seen it listed as there being 1,600 people there which sounds about right if anything a little generous. 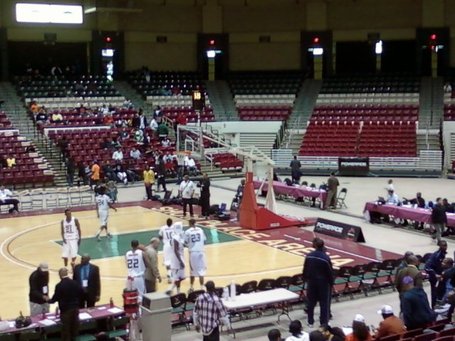 Despite the lack of top 25 recruits like in the years past, before Michael Jordan pulled from the event to establish his own game, there were still a number of quality players in the game and tons of interest to Georgetown Fans. In addition to our two recruits, there were recruits representing Pitt, Rutgers, WV, Nova, and Syracuse.

That being said I thought both Greg and Mikael showed a lot of promise and a lot of skills that will make them valuable additions to the Hoya squad for years to come.

Mikael started the game. He is definitely 6'8" probably 6'9".  Has long arms and is pretty mobile. He had a nice shooting stroke. He even hit a 3 pointer. His other points came off a dunk in transition and 1 of 2 from the FT line as he got fouled on a lay up in transition. Both free throws looked good even though one rimed out. One of his other 3 point attempts also rimmed out and he made a nice face u spin move against Malcolm Gilbert and was fouled but they didn't call it. He played solid post defense which was a surprise for an all star game. He blocked Desmond Hubert coming from the weak side and he stripped Nemanja Djurisic a 6'8" PF going to Georgia next year while he was posting Mikael up. He also forced Nemanja to kick the ball out because he couldn't get around him. He had a really nice rebound out of his area in traffic and followed it up with an excellent outlet pass to start the fast break. I was most impressed by Mikael's great attitude. He was clapping and cheering on his teammates. He really seemed to be getting along with Greg, motioning for him to come sit next to him on the bench and chatting it up. He has a strong basketball IQ. He took another player aside and was pointing out things to him after a time out. Seems like a great kid and teammate.

The talent is definitely there. He's definitely a small forward. He showed of a variety of skills elevating over defenders to make jumpers, slashing through the defense on drives, and grabbing offensive rebounds for put backs. He can do it all on the offensive end. He has a nice shooting form. He may take a little time to adjust to the higher level of competition, but that's what kenner and the china trip are for. He also played some solid post defense and even successfully guarded 6'11 Malcolm Gilbert. He altered a couple shots on defense and picked up a steal. He also showed the ability to stay with smaller small forwards. He seems like a nice genuine kid. He knows he's going to have to come in and work hard and compete for playing time. He's going to be good.

Both kids are going to be great additions. They both fit into the long, athletic, talented mold of players we seems to be encouraging. They both can stretch the defense with their jump shooting ability. The Future looks bright for the Hoyas.

Unfortunately I have not been able to download the pictures from my camera. So thank you to glidehoya for allowing me to use some of the photos he took. 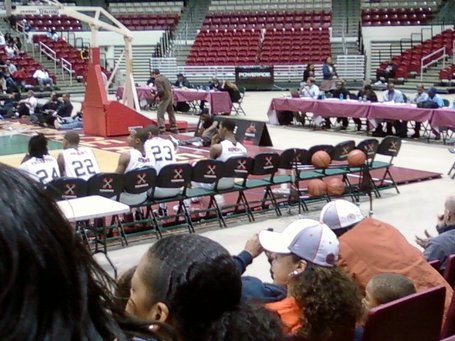 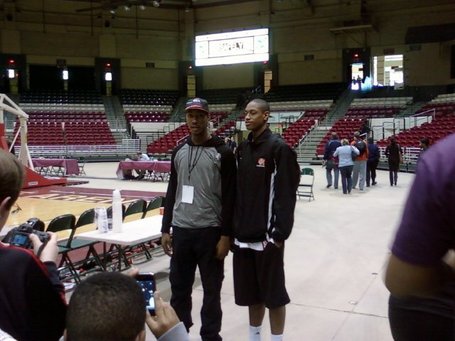