Share All sharing options for: Otto Porter Picks Georgetown Over Kansas and Missouri 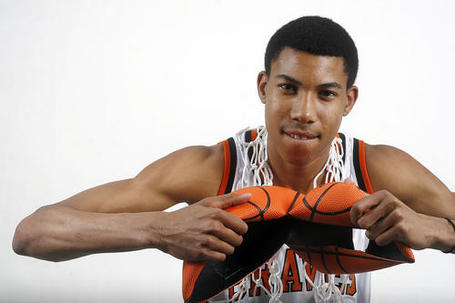 Welcome to Georgetown (via www.semissourian.com)

Otto Porter, a 6'8'' forward from Sikeston, Missouri, has verbally committed to Georgetown according to various sources, although the story was first reported by Ron Bailey of Hoya Report.  Porter is the top uncommitted player in the Class of 2011 and has steadily climbed up the rankings over the last 12 months.  In January, he was labeled "the best player no one knows about," by ESPN.

Porter committed fresh off of an official visit to Georgetown and was slated to visit Kansas this upcoming weekend, although the trip will be cancelled in light of his recent commitment.  Porter is the second player in the Class of 2011 to choose the Hoyas over the Jayhawks, an interesting development because the two programs have traditionally not competed over the same recruits.

The news of Porter's commitment puts a cap on an outstanding recruiting class that had previously looked bleak after assistant coach and lead recruiter David Cox left for Rutgers over the summer.  Over the past ten months, John Thompson III and his staff, which includes new assistant coach Robert Kirby, have quietly put together an impressive incoming class consisting of three Top 100 ESPN recruits, The Washington Post All-Met Player of the Year, and a former Duke commit (obviously not ranked anymore).  The incoming class is extremely long, lean and athletic and able to play a variety of positions, which is perfect for Thompson's system.

Porter's commitment also guarantees that there will be at least one transfer from Georgetown in the upcoming months, as the team is currently maxed out on available scholarships.

I am hesitant to let this news change my moderate (i.e. low) expectations for next season.  It is hard to replace three 3-year starters and incoming freshman tend to take awhile to adapt to Big East play.  While next season might have its ups and downs, the Porter commitment and stellar recruiting class sets the stage for future success.  The Hoyas could very well play a lineup consisting of four players over 6'7'' in the near future - a major change from the Georgetown teams of years past.  But that is a topic for another day; for now, I say welcome aboard to Otto and great job to Thompson, Kirby and the rest of the Hoyas staff.