The Casual Awards: Getting Advice From Charlie Sheen

Share All sharing options for: The Casual Awards: Getting Advice From Charlie Sheen

The Georgetown Hoyas are struggling right right now, limping into the Big East Tournament burdened by a three game losing streak and the broken left hand of Chris Wright.  But all is not lost!  To help us hand out hardware to those most deserving, we've enlisted the help of Charlie Sheen!  Sheen had some time on his hands this morning after his morning 5am workout at the Sober Valley Ranch and was shockingly more than willing to participate.  Away we go... 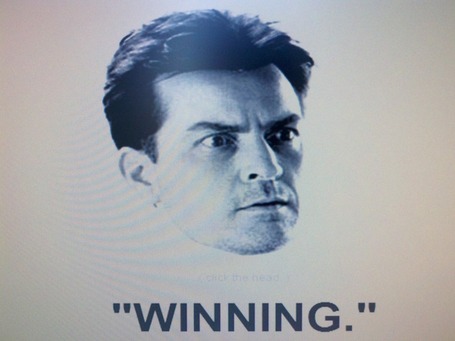 "I'm going to win every moment." (aka The Chris Wright Heart of a Champion Award:)

Austin Freeman.  In a game where everyone else sucked the life out of the Fifth Third Arena, Freeman scored 21 points despite another less than stellar shooting performance from the floor (7-23, 1-7 from three).  Also, if I were to be so fortunate in life to be able to start a bank, and I were to name it "Fifth Third", feel free to shoot me in the eye.

"Your perimeter's been breached. You got work to do bro."

Georgetown's perimeter defense has not been gnarly gnarlingtons.  The Bearcats shot 40% from three point range and numerous wide open looks that they missed.  Every time it seemed the Hoyas were poised to make a run to make it a one or two possession game, Cincinnati crushed our souls with a three.  The Hoyas have to do a better job closing in on the opponents' perimeter guys, especially in the Big East Tournament against the Kembas and then in the NCAA Tournament against a 1st round opponent who will likely have to rely on the three to send us to our graves.

"I'm just going to sail across the winds of the universe with my goddesses."

Cincinnati head coach Mick Cronin.  What a job Cronin has done with that group, especially after losing Lance "Born Ready" Stephenson last year to the NBA.  If Cronin can make sure Yancy Gates plays with his head on straight in the Dance, the Bearcats might be a legitimate threat to make the Sweet Sixteen in its first appearance in the Tournament since 2005.  Not sure I really believe that, but Cincy is clearly really good playing against teams without their starting point guard.

"I closed my eyes and in a nanosecond I cured myself."

Real hungover today after a weekend filled with Mardi Gras festivities.  But am I complaining? No.  Because I am a total, bitchin' rock star from Mars and that's how I roll.   To test out Sheen's self-curing theory I dreamed that I had the power the cure Chris Wright's broken hand with a simple touch, but when I flashed my Casual badge to get into McDonough I was stopped at the door by the Sports Information Department's bearish goons.  Alas, I was unable to cure Wright in a nanosecond and Georgetown still sucks because of it.  Once again I have failed you.  And I am sorry.

"I may forget about them tomorrow, but they'll live with that memory for the rest of their lives. And that's a gift."

Senior Day is a great tradition unique to college sports, as students and fans honor those leaving campus a few months from now.  And despite the loss, it was good to see Ryan Dougherty get some court action in what was likely his last chance to do so in a Georgetown uniform.

Yancy Gates.  10 for 10 from the free throw line?!?  Are you f-ing kidding me?  You are a 58% FT shooter on normal days.  Then again, I guess what a "normal day" is is kind of relative.  For Gates it's waking up, having breakfast, heading to practice and shooting hoops.  For Charlie Sheen it's banging 7 gram rocks and finishing them because he has one speed and one gear - GO.

"I'm going to hang out with these two smoooooking hotties and fly privately around the world."

What every Georgetown fan will be saying to themselves on Wednesday at 2:15pm after being blown out by Connecticut.  Who will guard Kemba Walker?  No, seriously.

"They picked a fight with a warlock."

Austin Freeman getting a technical foul.  Awesome.  Freeman attempted zero free throws before yelling at the refs, and attempted six after voicing his concern for his safety in the paint.  Looking forward to what happens when Freeman gets his sitcom taken away by CBS executives.  Then there's really going to be hell to pay.

Some positive news on the Chris Wright recovery front this week, as Wright was taking jumpers in practice.  Of course that could mean he was hoisting one-handed jumpshots with his entire left arm and hand in an iron cast, but whatever, at least he's out there trying.

"I embarrassed him in front of his children and the world."

Jason Clark, man, come on!  The Hoyas needed Clark SO BADLY to step up in the wake of Wright's injury and he is destroying my will to live:

"A lot of people think Major League's called Wild Thing. As they should."

Kudos to Comedy Central for taking advantage of the Sheen train and running Major League like nine times over the weekend.  Mrs. Roger Dorn very underrated in that seduction of Ricky Vaughn scene.

"Clearly he didn't bring gum for everyone."

Austin Freeman made 7 shots from the floor.  The rest of the team? TEN.  TEN?!?!

"The only thing I'm addicted to right now is winning."

WE HAVE NO CHOICE!  What else is there to be addicted to?  Booze?  LAME!  Drugs?  OVERRATED!  Sex? ALSO OVERRATED!  What we need are wins and wins FAST.  Let's go JT3, get that shit together.

"Thought you were messing with one dude? Sorry."

So much for the "If we shut down Yancy Gates we'll beat Cincinnati" train.  Georgetown held Gates to only a single made field goal, a frecking heart-breaking, hail-mary, off-the-glass chuck as time expired, but was gutted by freshman Sean Kilpatrick, Darnell Wilks, Dion Dixon, and the rest of the Bearcats who clearly drank their tiger blood en route to a dominant 33-22 rebounding edge and made 24 of 30 free throws.  The positive takeaway is that Georgetown has a few days to devise a plan to prevent one dude named Kemba Walker from going apenuts all over the Garden floor.

"Imagine what I would have done with my fire-breathing fists."

For this gem let's imagine what would have happened if Cashmere Wright hadn't fallen on Chris Wright's hand and broken it under his crushing girth.  Maybe the Hoyas comeback and win that game at Verizon against the Bearcats.  It's likely Georgetown wins Armageddon at Verizon against Syracuse which would have definitely resulted in the first GLOBAL PHENOMENON hookup and perhaps child 9 months from now, and maybe they win at Cincy on Saturday.  Suddenly 10-8 becomes 13-5, and Georgetown is sitting pretty until Thursday and likely staring at a no worse than 3 seed in the NCAA Tournament.  But alas, Chris Wright's fire-breathing fist was extinguished, and here we are.

"Dying is for fools. Amateurs."

Georgetown is down but we are not out.  As far as I'm concerned the more games the team gets to play without Wright the better they will be for it in the long run, as players like Markel Starks get an early and valuable look at what to expect next season or even later this month should Wright come back but get into foul trouble.  The wins aren't there, but let's be honest, these games really haven't mattered all that much, and frankly, neither does the next one.  Sure, going into the Dance with some confidence would be nice, but that confidence and fifty cents bought the Hoyas a damn New York Post last year.

"Just sit back and enjoy the show."

Welcome to March Madness everyone.  Now the real fun begins.

Gratuitous picture of The Goddesses.

UConn is (probably) NeXt.