Sleeping With The Enemy: Soaring Into The Sweet Sixteen With The Marquette Golden Eagles!

Share All sharing options for: Sleeping With The Enemy: Soaring Into The Sweet Sixteen With The Marquette Golden Eagles!

Just because the Georgetown Hoyas aren't in the Sweet Sixteen it doesn't mean we can't enjoy it too dammit!  In order to properly celebrate Marquette's win over Syracuse that catapulted the Golden Eagles into the second weekend of the NCAA Tournament, we're back with a very exclusive Q&A session with Anonymous Eagle!  For those unaware, Anonymous Eagle is our bestest blog friend for a Conference USA team that happens to play in the Big East!  And since we at Georgetown know a little somethin' somethin' about beating North Carolina in New Jersey (OH GOD THAT FEELS LIKE SO LONG AGO), he has graciously taken time out from his celebratory keg stands to answer our always intriguing questions.  Gracias, amigo. This Bud Light is for you. 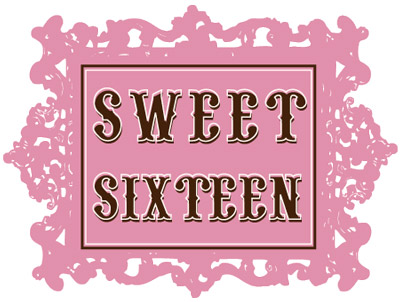 Marquette's gonna have the biggest Sweet Sixteen party ever! via blog.evite.com

Hey man, congrats on making the Sweet Sixteen! How do you feel? Do you understand that I am slightly jealous and that by "slightly" I mean "really"?

We appreciate it, buddy. I said before the Tournament started that a couple of wins in the Dance wouldn't wash away the frustrations of what was a very up and down year for the Golden Eagles, because I generally don't like how we lose the forest for the trees with this single-elimination tournament in March.

WHOA BABY was I wrong. Suddenly, the gutwrenching losses to Wisconsin and Vandy and St. John's and Cincy and the mortifying curbstomping Marquette suffered at the hands of Seton Hall seem like they happened fifteen years ago. We have exorcised the demons. THIS HOUSE IS CLEAR.

In the bigger (and more rational) picture: getting out of the first weekend was a big step for a program that's been snakebitten in the Tourney the last five years. It's been well publicized that Dom James, Jerel McNeal, and Wes Matthews never got to the Sweet 16 in their four years at MU, and the same is true of Lazar Hayward, though I will stab anyone who claims that that blemish invalidates the careers of those four remarkable players. (And if anyone is making a similar argument about Chris Wright and Austin Freeman and Julian Vaughn based on their tournament shortcomings the last four years, direct 'em my way and I'll stab them, too.)

ANYWAY, what I meant to say was: this feels awesome, and it's made all the more sweet by the heartache over the last five years.

Would you say that beating Syracuse to make the Sweet Sixteen made the experience like 1000 times better?

It did, though our dislike for 'Cuse comes from a different place than yours. Your Hate is organic and beautiful, born of decades of conflict and strife and Magoo-ness, while our distaste for the Orange feels a bit forced, born of the fact that the Orangepeople seem to forget we're in the conference every year and look at the schedule thinking: "Wait, why do we have a game with Marquette in the middle of the Big East season?" I know that it's hard to keep abreast of current events up there at Ice Station Zebra, where I presume the news arrives by cable and is primarily sea lion-related, but still: we're not fucking DePaul, and we've been in your conference for six years. So, yeah: that made the win mo' better.

Can you please explain this whole 3 Goggles phenomenon? If I recall correctly one of your boys got a technical after hitting a three against Georgetown because I think the ref thought it was a gang sign. 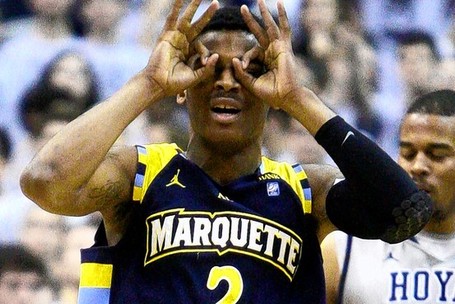 Hey look, it's Georgetown's own Julian Vaughn in the background!  via si.wsj.net

Lemme address the second part of that question first, because we had the same reaction when DJO got T'd after he flashed the goggles. Turns out the official wasn't concerned that DJO was giving a covert attack signal to some Crips in the crowd, but was instead offended by Darius' language after he hit the three. Apparently DJO said something to the effect of: "SCORE THE GOAL, SIR," presumably to the official seated at the scorer's table. 'Cept DJO resorted to the parlance of our basketball times when making the request of the official, and the ref didn't take kindly to being asked to, ahem, count it. Bitch.

As for the goggles: the kids tell me that the Portland Trailblazers were the original purveyors of the goggles, and Marquette alum (and current Blazer) Wes Matthews goaded the current Marquette squad into flashing the goggles after every 3. It's harmless and it's goofy as hell and I, for one, am going to milk every drop out of this thing.

We heard reports that Buzz Williams emerged shirtless from the Marquette locker room to celebrate with his players once more after Sunday's victory.  Is America prepared for Buzz to rip his shirt off on national TV if Marquette is to advance to the Final Four?

This has been well documented, but Buzz can sweat with the best of them. Dude needs to get some of that moisture-wicking shit from our friends at Nike to wear under his suits, because he looks like he ran through a sprinkler by the first media time out. This is all a long way of saying: I don't know if he took his shirt off after the game, or if it just absorbed into his body.

Regardless, I wasn't taken aback by the tales of a shirtless Buzz, but that's probably because I've seen far, far worse at a Brewers tailgate. Bare-chested three-spinners double-fisting brats while pounding MGD? Got 'em in spades, my friend.

Not to be a wet blanket or anything, but will it be weird seeing Buzz Williams at Oklahoma next year? Who might replace him at Marquette should he decide to bounce?

I'm not really worried about OU. Riddle me this: why would you leave a basketball-only school that'll match any salary you're offered and that plays in the best basketball conference in the history of history to play second fiddle to football at a school that's being investigated by the NCAA and that plays in a conference that's going to fall apart in the next five years? (The only answer that possibly makes sense: to be closer to home.)

I have no idea who'd replace Buzz if he pulled a Crean and bailed, but I hear some of the 'Nova fans are growing disillusioned with Jay Wright. We'd be happy to take him and his $5000 suits and $10,000 hair off their hands if we're coachless in a week.

The Sweet Sixteen is awesome, but is there a small part of you that would almost rather stay home than have to go to Newark, NJ for the weekend?

I had no idea how to answer this question, because I know nothing about Newark and I've never visited the Garden State. So I opened up Google, plugged in 'Newark,' and hit "I'm Feeling Lucky." I was directed to the City of Newark's home page, and I screengrabbed the banner that greeted me: a parking lot featuring a "DO NOT ENTER" sign. I think that about sums it up, doesn't it?

What are your thoughts on how Marquette matches up with North Carolina? Any prediction on the outcome?

I gave up the prediction business after I gave MU a 7% chance to make the Tournament after the clunker vs. St. John's. There's already an overwhelming case that I'm an idiot who doesn't know what he's talking about; no reason for me to add more fuel to that particular fire.

Anyway: I have no idea how to feel about this next game. Carolina's height scares me, but so did Syracuse's. Harrison Barnes is an incredible talent and a dynamic scorer, but Jimmy Butler's become something of a defensive menace in the last month. Just ask Marshon (37 total points in two games vs. Marquette) and Kemba and Tu Holloway (may not have even gotten off the team bus) and now Scoop (just six points with Jimmy blanketing him for the second half) about that experience. And, hell, there's only one really good team in this tournament, and UNC's had its share of pratfalls this year. Let's get crazy and make a memory, I say.

Just to recap, would you say that beating Syracuse to make the Sweet Sixteen made the experience like 1000 times better?