Casual Investigation! Is The Big East Damned to Eternal Suckiness?

Share All sharing options for: Casual Investigation! Is The Big East Damned to Eternal Suckiness?

Georgetown's early departure from the NCAA Tournament has put a wet blanket on what was supposed to be a joyous run through March, but it hasn't stopped THE GLOBAL PHENOMENON from continuing its award-winning Casual Investigation series. Today, we're tackling a topic that has been talked about ad nauseam among those who think they know stuff about college hoops (i.e. we, the united kingdom of bloggers): the state of the Big East in the wake of its poor performance in the Tournament in the past few seasons. 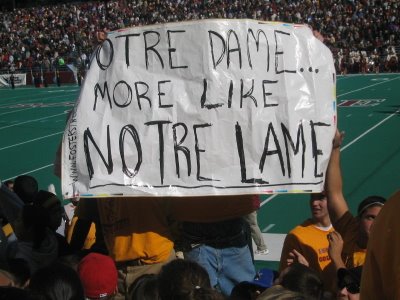 Feel Free to Create One of These for EVERY DAMN BIG EAST TEAM
via 2.bp.blogspot.com

The best thing about SB Nation is that there are a lot of other writers a lot less depressed than I currently am to fully cover the state of the Big East, so I'm, leaning on them a bit to tell the tale. Here is the story, so far. As you know by now and have heard Charles Barkley tell you, the Big East received a record number 11 bids to the NCAA Tournament and fell flat on its face after the first week of action, with only two teams advancing to the Sweet Sixteen. This can only lead one of two conclusions: the Big East either sucks or is unlucky. SBN Blogs The Smoking Musket and The UConn Blog have opposing views on the unfolding crisis and went to battle on the topic.

The Smoking Musket thinks there is something wrong with a conference that can't crown a national champion or produce NBA stars. They list two main problems plaguing the conference:

While the Big East features depth and a host of good teams, it's this [(1)] lack of star talent that keeps it from making the leap from regular season darling to postseason domination. When combined with the [(2)] officiating issues, this has stunted the growth of the Big East greatly over the past decade. What could be a dominant conference has left fans wanting and critics ranting.

The UConn Blog, disagrees, and thinks the conference is fine and that using national champions over a six year window is myopic:

The problem isn't the Big East, the problem is that the format is designed not to reward the absolute best team, but rather one of the six or eight best teams that happens to get a lucky draw and avoids making a dumb mistake the longest. It's incredibly exciting, but it means measuring outcomes based off of tourney performance is a fools errand.

Naturally, having flown over Switzerland once, I can see both points of view. I agree with The Smoking Musket; Big East officiating is horrendous and does not prepare teams for the way other conference officials call games, namely in a consistent manner across a season. But this is not a main reason the conference has flopped recently, and frankly, is an easy excuse. I have always contended that officials should be region specific, rather than conference specific. Currently, officials tend to only 1-2 conferences per season, which might have made sense when the Big East was for schools in the northeast and the ACC was for schools on the Atlantic Coast. With the dawn of super conferences, there is no reason to jet refs all over the country just to keep crap officials making crap calls for the same teams. Let other conferences like the Big Ten, CAA, A10 and Patriot League suffer the wrath of Satan, errr, John Cahill. It will be less travel for the officials and smooth out the differences in officiating across conferences.

I also agree with The UConn Blog. NCAA Tournament success is just one of many measures of a successful conference, team and program. So much of NCAA Tournament is based on draw, match-ups and luck. This isn't a defense of Georgetown, they plain sucked in the Tournament this year, but some other Big East teams lost heartbreakers and got unlucky bounces, crap fouls, and garbage draws.