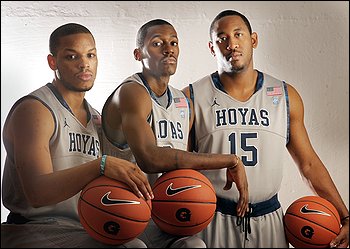 I'll have more to say about this once the "State of the Program" threads inevitably appear, but this isn't just any old offseason for Georgetown.  Obviously, in terms of team composition, this year's turnover is the most significant since Roy Hibbert, Jonathan Wallace, and Patrick Ewing Jr. graduated.  Both that season and this one ended disappointingly early.  Thing was, back in 2008 most Hoyas weren't thinking that the JT3 program needed to change, and fast.  With DaJuan Summers theoretically coming into his own and Chris Wright / Austin Freeman showing early promise, we figured a re-building year following another shot at the top was in the works.  No one shed a tear when Vernon Macklin departed, and suddenly everything was different when Greg Monroe signed.  Anyone who would've dared to suggest that we would have zero NCAA wins for the next three years would have been shot for treason.  Everyone knows what happened next.

I guess the most cathartic thing about this loss is that the second major phase of JT3's career at GU is over.  It will ultimately be remembered by:

Wright, Freeman, Monroe, Summers.  All gone.  No one is looking at Henry Sims and Jason Clark to be top-level performers or even emotional leaders next season.  At best, Clark will probably finish his career at Georgetown playing a "solid holdover" role next season; and Sims will have to vastly improve his game to be remembered as anything other than a sometimes funny, usually frustrating, bench player.

It's my opinion that the successes and failures of the '08-'11 Hoya squads had much more to do with the players than it did with coaching.  To some, this is so obvious you are probably mad at me for having caused you to waste time reading it.  To others, this is actually an arguable subject and you are probably mad at me for suggesting that JT3 doesn't deserve the lion's share of the blame for failures.  We'll debate this endlessly until November, when we can all shut up and just enjoy some basketball together again.  My point is, you can expect an entirely new catalogue of strengths and weaknesses next season - I also think the average fan will view JT3's coaching ability in a more positive light 12 months from now.

On the larger scale, we're moving into the third phase of this coaching regime.  I'm both excited and worried by the uncertainty surrounding the program at the moment.  There's big decisions to be made on the court (how fast will the frontcourt be rebuilt?) off of it (practice facility please?), and on issues in between (when do we start playing in the A-16, because the whole "Big East is a mega-power conference" thing actually seems to be detrimental to everyone).  Coincidentally, fan participation has never been more of a commitment (I wrote this instead of documenting my lunch), nor has it ever been more influential (thanks, CasualHoya), so it makes sense for each Hoya to get a vision of what he/she expects.

Anyway, hope springs eternal - Hoya Saxa.  See you at the live-blogging of the Masters.