State Of The Hoyas: Pissed Off And Taking Names

Share All sharing options for: State Of The Hoyas: Pissed Off And Taking Names

This is the latest opus by Casual Wiseman sleepyhoya, who is currently winning:

A losing streak always exposes a team's flaws and our current run is no different. The team is overly reliant on Chris Wright, displays inconsistent effort on defense and on the boards, and has absolutely no inside game if Julian Vaughn's shots are not falling. But none of this is new, we've known this from the beginning. The other thing a losing streak exposes is all of the little things that piss you off about the program, mainly the off the court stuff. So today, and I can't believe I got this far into the season without this abject whining, I'm devoting this post to what is pissing me off.

Sleepy is really pissed off after The Jump:

I'm pissed at Clyde's. I walked in there to meet some college friends on Saturday and was met with a sea of orange. Nothing you can do if all the opposing fans pick a bar and go, but that wasn't the case here. As you walk in you were given an orange wristband to take advantage of Clyde's laying out the red carpet to the pukes from upstate New York. This is Clyde's for god's sake! The Tombs, the most visible part of the Clyde's empire, is virtually on Georgetown's campus. They make a lot of money off of Georgetown students and alumni. It is part of the Georgetown experience for almost all students to spend time at the Tombs. Hard to know what the Clyde's overall corporate strategy is, but my best guess is they will do anything for money and they think Georgetown students and alumni are fucking morons. 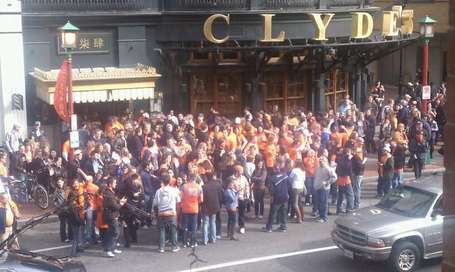 I don't go to the Tombs very often, so I doubt they'd care very much to learn that I won't be going again. I wonder if they'd care if current students decided to take one day before the end of the semester to go someplace else. Perhaps purchase an orange at Wisey's and leave it on the Tombs steps before going to another establishment to spend your money. Just a thought.

I'm pissed at the referees. I don't think we've lost a game this year directly because of bad officiating. But I can tell you I've been watching college basketball for 35 years and I've never seen a more incompetent set of officials. I swear I'm going to explode if they stop the game one more time and spend 10 minutes looking at video to decide if they should take two or three seconds off the clock. The fact of the matter is they love doing it because it puts them on the TV screen instead of the players. The new crop of refs are big on looking good on camera and very short on the rules of the game. It makes some Big East games unwatchable for the fans, uncoachable for the coaches and unplayable for the players who are constantly having to adjust to these incompetent refs.

I'm pissed at the Verizon Center in general. One would think that having beer guys come down to the seats would solve all problems. Well it doesn't, but it does come close. I'm pissed because it seems the people who control the audio and video systems in the building do everything they can to take the life out of the crowd.

Picture this, Georgetown goes on a big run bringing the crowd to its feet and causing some opposing coach to call a timeout. At other schools, the timeout is used to egg the fans on even more - a montage of past wins, even a stupid clip from Braveheart, anything to build on the enthusiasm that's coming from the stands and undoubtedly helps our players.

Not at the Verizon Center or from Georgetown! A big run is greeted by a loud advertisement for Georgetown's business school...yeah that really keeps the crowd going. No, we don't see Patrick or Alonzo savagely dunking, we have incredibly lame corporate giveaways like a free lube job from Jiffy Lube. Well that's exactly what you're giving the team when you kill the buzz in the crowd. My favorite is near the end of every game, and with this team that's when the result almost always hangs in the balance, the band and the students break out in singing some version of "Hey! Baby". It is cut off every time by some lame announcer who spends sixty seconds extolling the virtues of Georgetown's Nursing School. Said announcer uses the PA system to drown out all of the students and kills whatever enthusiasm may have been built up. And who the hell is doing their market research? It's rude to talk over students who are trying to get into the game and stupid to spend money on a crowd that's not listening and not likely to be enrolling in Nursing School anytime soon.

I'm pissed every time I hear someone say "I'm OK if we lose early in the Big East, it gives us time to set up for the NCAA's." There is no logic to this. We are not a better team when we have a week to prepare for a game. Look at our schedule this year and you'll see. Layoffs are not our friend. We are a better team when we are playing with confidence. And you get confidence by winning games, especially in the Big East Tournament. And for the record, I'm not ok with us losing anytime, anywhere. Our chances of going deep in the NCAA tournament I think are directly related to how we do in the Big East. If we have a week off after getting bounced in the first round of BE Tournament, I doubt we make it to the end of the first weekend.

I'm pissed at whoever does the schedule. How is it at the climax of the Big East season with all the chips in the middle of the table and everything up for grabs, we're playing one game two out of the last three weeks? On what planet does it make sense to bunch up the games early in the season so that when people really get into it you can only offer a home game once every ten days. Someone please explain this one to me.

Finally, I'm pissed at the polls and the brackets and bracketology. They are essentially meaningless, especially for a team like ours. We win when we play with confidence and we exert maximum effort on defense and the boards. We can beat any team in the country and can beat ourselves against any team in the country. How we get there and what are seed is are not really relevant. But I know most of everyone's waking hours, including mine, will be taken up by all of these questions. We will all be worshiping at the altar of Joe Lunardi and listening closely to the Doug Gottlieb's and Dick Vitale's of the world - and that pisses me off.

Hold on a second, a FedEx envelope just arrived. Let me see what it is. Wow, it's two tickets to the Big East Tournament! Four days in MSG, basketball 's Mecca! A Casual Hoya suite no less! Somehow I'm not pissed off anymore, forget everything I just wrote.

See you in NYC.